Five stars ⭐⭐⭐⭐⭐ to A Collection of Secrets, the second installment in the Jericho Falls Cozy Mysteries series by Brook Peterson! ❤️ 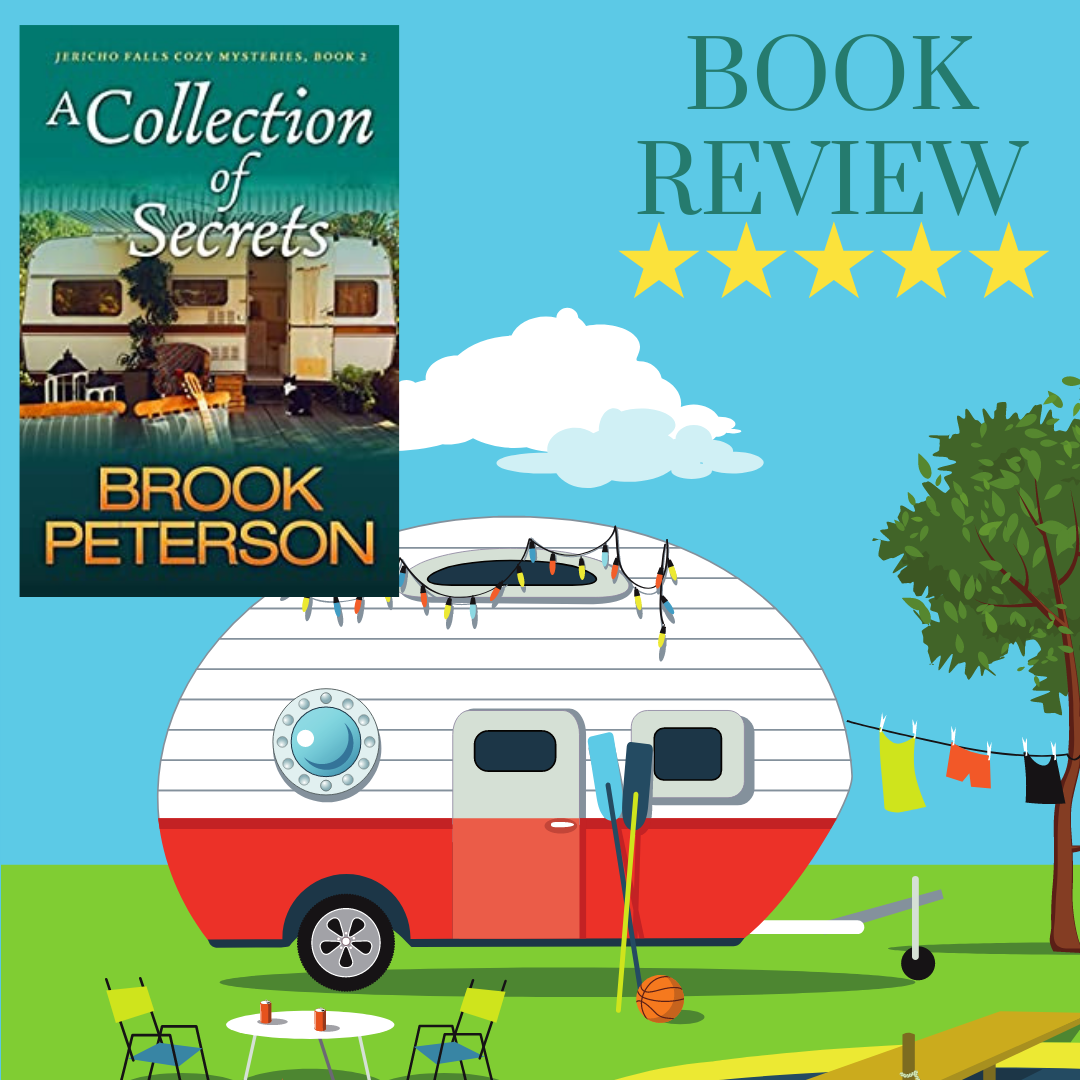 Intrigue with a side of wit – a delightful cozy mystery!

Heading back to Jericho Falls in this latest book from Brook Peterson is as easy as wrapping yourself in a cozy blanket. A Collection of Secrets returns the reader to the former-gold-mining-town-turned-tourist-destination with a cast of familiar characters – plus a few new ones.

Readers were left with some burning questions after the conclusion of Peterson’s first book, A History of Murder. Fans were chomping at the bit: What happened to main character Chloe Martin’s best friend Christy all those years ago when the girl fell to her death? Who’s been keeping secrets that first cast the suspicion of guilt on innocent Chloe?

And speaking of secrets… What *is* that handsome police chief hiding from Chloe, and will it squash any meaningful relationship before it gets off the ground? You’ll have to read the book to find out. Speaking of the men in Chloe’s life… Although he no longer gets high marks from Chloe, this reader hopes the author will continue to keep ex-boyfriend Blake prominent in the series. He’s grown on me!

Like red herrings? Get out your fork and knife. Peterson is adept at making readers run this way and that as they attempt to solve the mystery before the main character. A Collection of Secrets had more than one fish.

Peterson’s wit shines through early on in this latest installment. For example, the “tragic” death and funeral for Goldie Prawn – yes, you guessed it, a goldfish – found me chuckling right along with Chloe. (For the record, had I been there during the service, I wouldn’t have made it through the funeral with a straight face.)

The dialogue Peterson crafted between the characters is crisp and believable. These are real conversations.

Peterson is a talented writer. She’s a master of positioning a phrase perfectly within her storyline, offering up creative imagery while getting the point across simply. One of my favorites from this book: “I felt so nervous I worried a butterfly might fly out if I opened my mouth.”

The author drops little “scene-setting” details here and there throughout her story to help readers feel like they know this world. For example, the line: “…even the bottom of the shower curtain that tended to turn orange…” helped me connect. Just these few words told me there must be iron in the water – again, I’m identifying with what Chloe is seeing because *I* know what that’s like, too.

This is the third book I’ve read by Brook Peterson, and I continue to marvel at the writing “voice” she has developed. Some authors claim to write in a certain style, but they don’t quite pull it off. This author writes top notch CURRENT cozy mysteries while not sacrificing the values and hallmarks defining the classics. Furthermore, Peterson could’ve easily written for some of the classic TV favs such as: Murder, She Wrote; Columbo; Monk; or Midsomer Murders.

If you are looking for a mystery with all the qualities of a classic, clean, cozy mystery, then A Collection of Secrets by Brook Peterson is for YOU!