Find this book on Amazon: https://www.amazon.com/Earth-Twelve-Off-Track-Book-ebook/dp/B09JCP1TWH 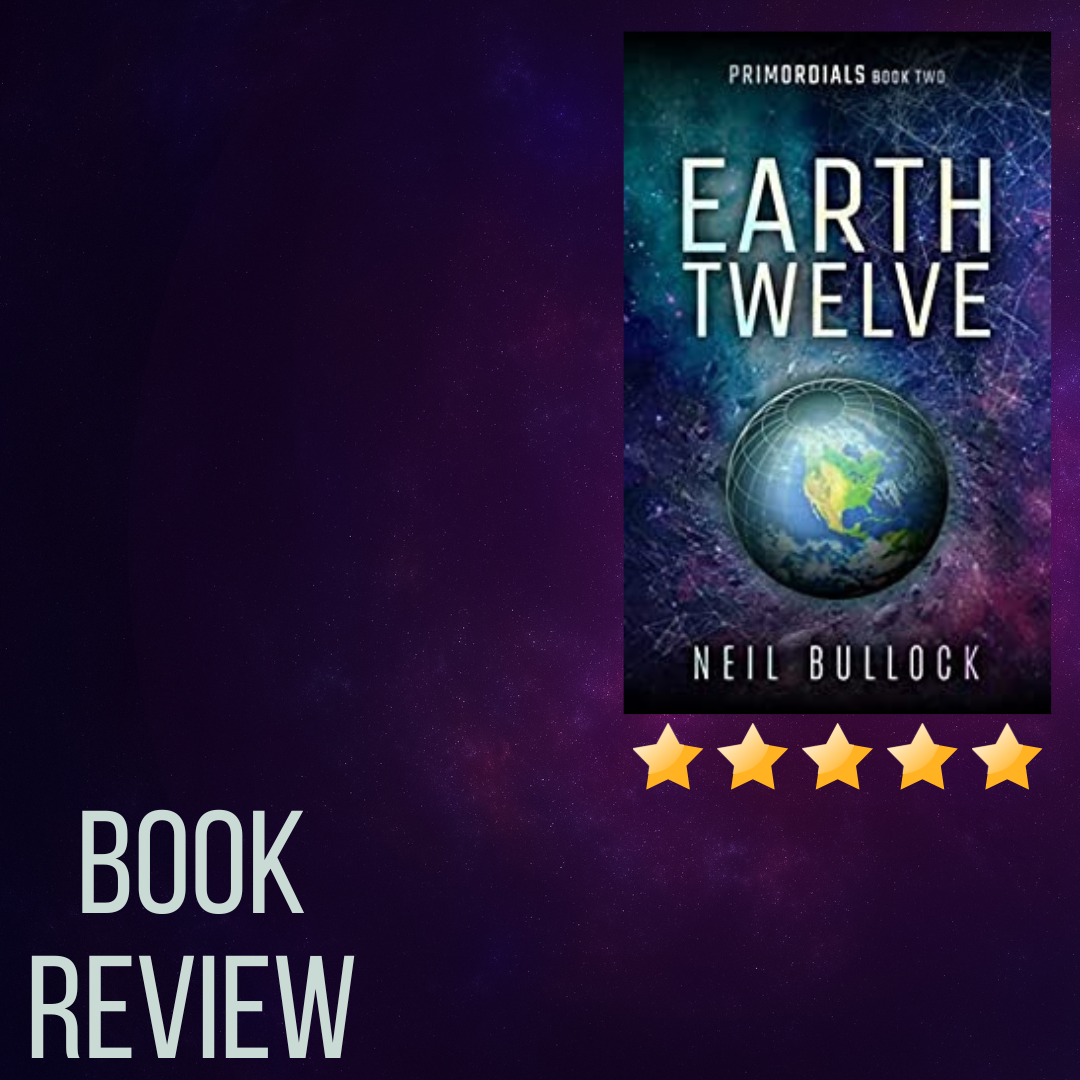 After finishing Off Track, book one in the Primordials series by Neil Bullock, I dove straight into book two, Earth Twelve. I couldn’t wait to find out “what happened next” as Eden Lucas and Lara Parker continued to explore the universe Bullock introduced to the reader. This second installment was everything I’d hoped for and then some. This book was a most satisfying read.

This time the storyline began from Lara’s point of view. While age and aging are handled quite differently in this series, we can easily identify Lara as an older teenager – a very smart and mature one, certainly – but also a young woman with limited experience in routine teenage events like a first date. And although lacking in those common encounters, Lara is still confident and curious.

From the title, it’s no secret that exploration on Earth 12 is the plan for this book. Eden and Lara “land” the interstellar train on the planet, the twelfth replica (of sorts) of the first Earth. As Lara disembarks and explores, she notes the cleaner city, the use of more efficient energy (electric-powered vehicles), and a trend toward using robotics and machines to meet the everyday needs of the city’s populace.

While assessing Earth 12, Lara also meets Ty, a young man of a similar age in The Sterling Grill – a surprisingly not “roboticized” bar. It’s revealed that Ty’s father owns the place, and eventually, he asks to see her again. Lara agrees to this first real date – she’s even excited about it.

Most everything the author has described up to this point, and even a little farther into the story, is quite… positive. Oh sure, there are hints of problems outside the city – apparently places Lara knew as thriving on other Earths have been abandoned on this one – but there is this… sunny feeling the author has layered throughout the first chapters of the book. And yet, that “Twilight Zone” feeling starts to creep into the plot. Things aren’t as ideal as they seem on the surface. About a third of the way into Earth 12, the reader knows this is a place where Lara can easily be in danger.

Author Neil Bullock lets the reader navigate the creepy landscape of Earth 12 where the monsters are white-collar professionals promising a better future for (some) Earth 12 inhabitants. Those not fortunate to be a part of The IP’s (International Alliance for Interplanetary Research) plan will be out of luck when the agency fulfills its mission.

Readers follow Lara’s journey on Earth 12 while watching Eden deal with her own demons back on the train in Grayspace. At one point she even refers to herself as “a sad hermit on a God-train.” Knowing what Eden lost in Off Track we can appreciate her struggle – but we also want to see her move toward building a purpose for herself. Through Lara’s and Eden’s thoughts, their meaningful relationship is explored – not quite mother and daughter, but certainly more than friends. As it becomes clear that Lara is in danger, Eden must push past her fear and not only help her but also do the right thing by the “God-train” and its reason for being.

Sharing much more of the storyline would introduce spoilers, but it’s in this book readers learn more about what the Grayshapes are; that other places besides planets need to be visited and understood; and finally, that the train has made a greater impact than initially believed. Some questions about Mitch (from Off Track) are answered, but more questions about The Creator (of the train) are introduced. There are still plenty of “whys” to be answered in this series.

Author Bullock adds more travelers (characters) to the train, and the dynamics will be interesting to watch play out in the next Primordials book. Bullock also removes another crew member after mind-blowing revelations. In other words, the author shakes things up. And it’s a good thing. The foundation is clearly being built for the next installment.

As with Bullock’s first book, he turns this complex tale into something the reader can follow. Important pieces of the puzzle are introduced, answering some questions from Off Track while promising more surprises in future books.

The ending of Earth Twelve is quite the kicker! It proves that whatever Neil Bullock has in store for us in the next book, it will be packed with even more action and discoveries.

Five stars to the author for Earth Twelve! When do we get to find out what happens next? Hopefully, the third installment in this series will be released soon! 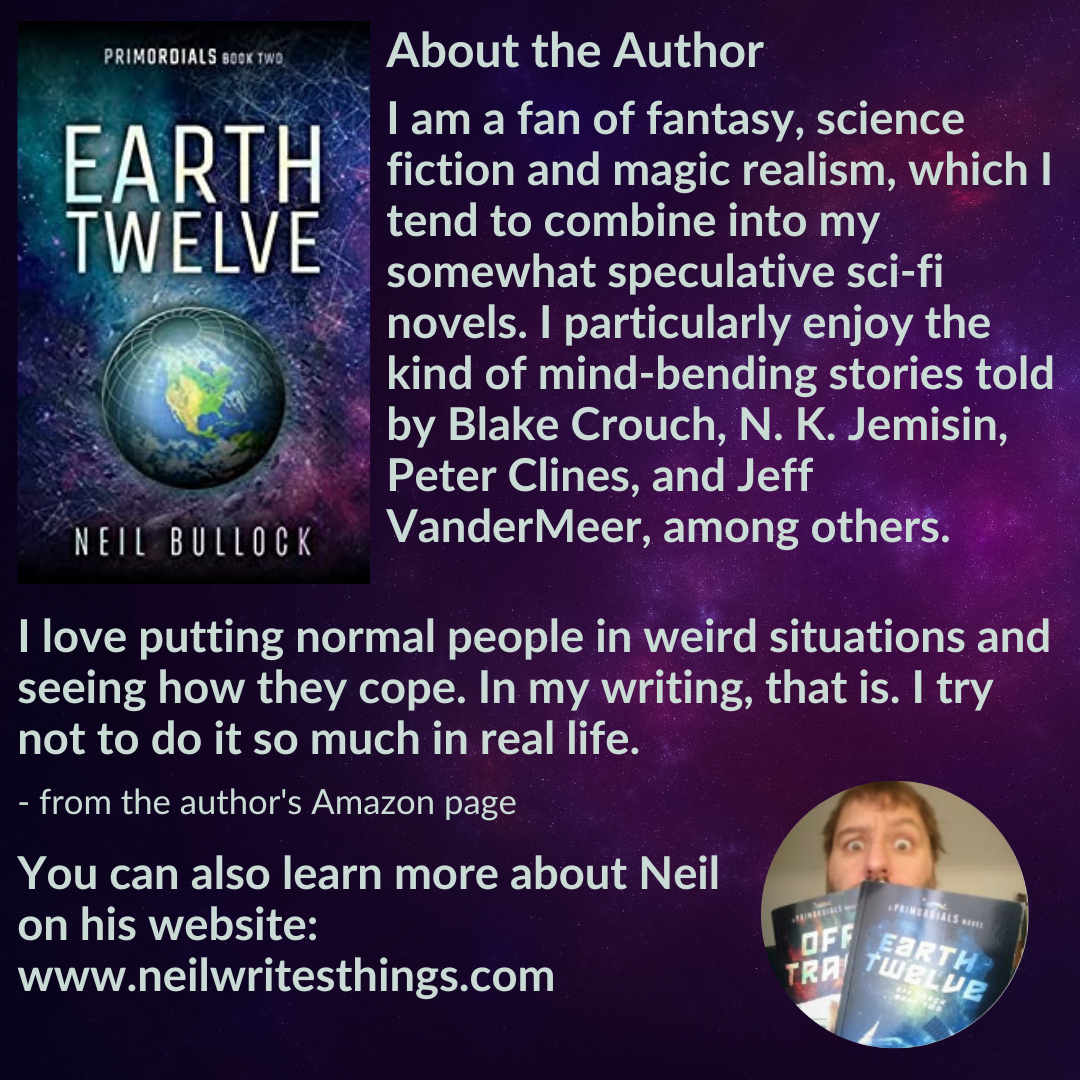