A big five ⭐⭐⭐⭐⭐s to A Grim Ending, by author Rachel Stanley! I knew I was going to love this third installment in her A Grim Series. I was not disappointed! 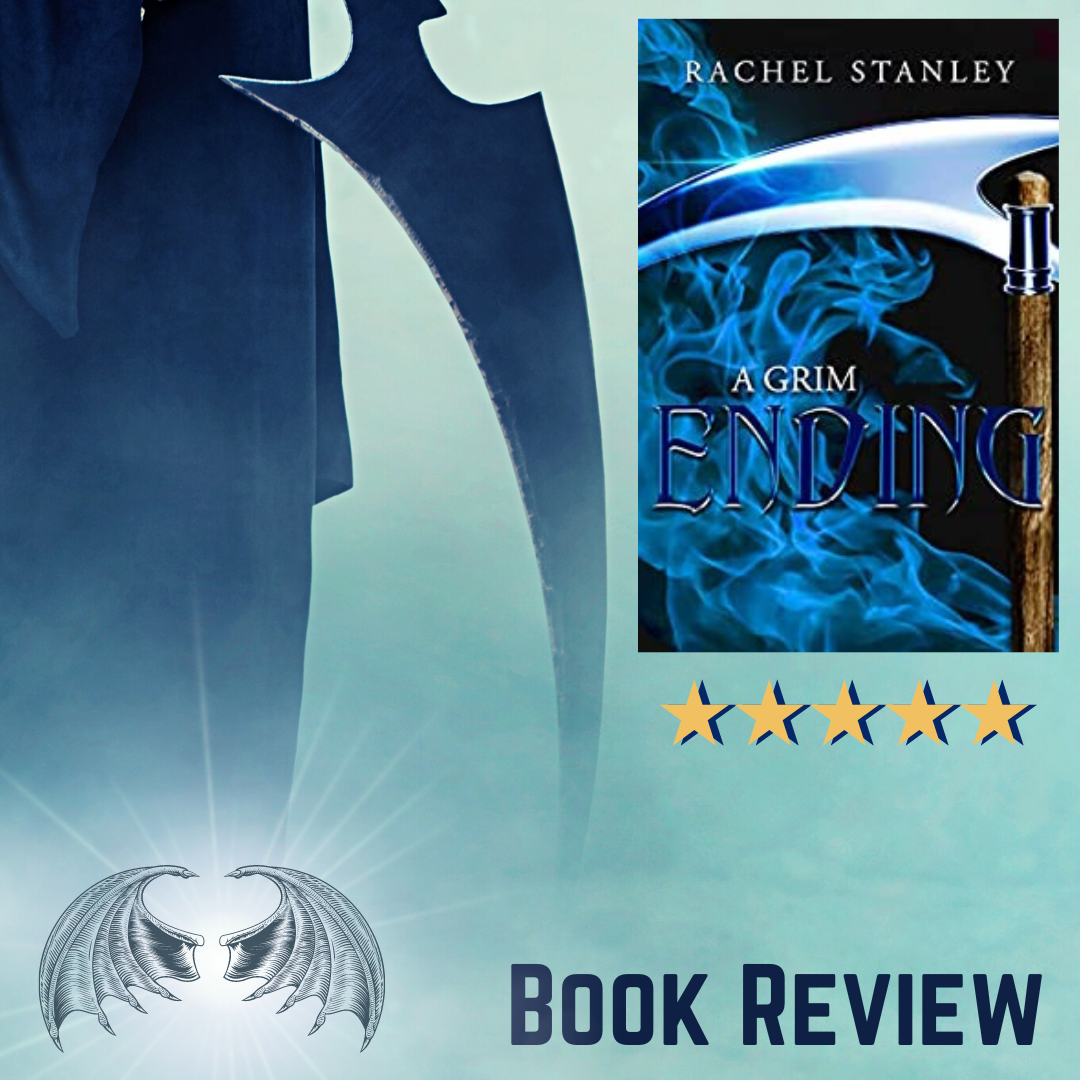 A Grim Ending, A New Beginning

I’ve eagerly awaited A Grim Ending – book three in A Grim Series by author Rachel Stanley. As soon as my schedule allowed, I immersed myself in a world of angels, demons, a prophesied portal, and a human key.

The author excels at delivering a complex plotline in such a way that the reader is not lost or turning back pages to reread a chapter. Stanley tells a marvelously intertwined and twisting tale with simplicity. This is why a reader can “binge the book” AND spend days afterward mulling over the metaphysical world the author built alongside “normal everyday lives” playing out on the page.

I’ve admitted this before: Blake is one of my “book boyfriends.” A prickly character on a good day, it’s been fascinating to watch the author make him “more human” over the arc of the series. Stanley has done a fabulous job of bringing Blake to life – and giving him an even better one. Oh, he’s still difficult and easily frustrated, but scenes such as his enthusiasm over his first taste of pizza, the experience of chopping an onion, or the sweet bewilderment of receiving a hug from Ellie…Well, if you are a fan of Blake, you will be rewarded with these snippets.

I tried to set aside my “I know I’m going to love this book” preconception in order to take it in more objectively as I read. I’m not sure how successful I was – being a fan of the first two books – but what I did note was a significant deepening of the relationship between Emma and Blake. Early on, readers will find this natural familiarity between the two – something that typically develops over time between couples. And while their relationship hasn’t had the benefit of multiple years to grow and change, their unique bond has forwarded them to this special space. The unnatural threads of tapping into each other’s thoughts and feeling each other’s emotions become second nature. As a reader, I liked seeing this effortless flow between the two.

As mentioned above, this IS a complex story, so the author needed to dribble in bits of backstory here and there to make sure the reader was “caught up.” I appreciated the subtle reminders delivered through conversation and character thoughts. The tactic was helpful in building the foundation for this final book.

As in prior books, Stanley delivers the story from various character point-of-views (POVs). And as in those previous books, this separation of character lenses works well. It’s easy to follow and further rounds out the plotline. I *think* the author delivered more of Ellie’s POV this time around, and it makes sense if the author is considering a spinoff series – which would certainly be a bonus for fans of the author’s work!

The character Abbadon is back as expected. I always chuckle (appreciatively) over the name assigned to this being. If you want to know what I mean, you have to read the book. But I did note in one of the last few chapters of A Grim Ending that the author lets slip – via one of her characters – that Abbadon’s being type may or may not be one of “the good guys.” Again, the author is introducing some deeper considerations behind her storyline. I liked this.

While reading on my Kindle, I highlighted so many key points. Of course, sharing most of them would require revealing spoilers – something I do not include in my reviews. However, as I skim through my highlights, I can see how invested I became in this book, in what the characters did, in what they thought, and in how deeply they felt. Talented authors not only bring the goods when crafting a compelling story, they also enrich readers by creating characters to care about long after the last page is read.

Expect major reveals and drama in this final installment of A Grim Series! Of course, readers know that the prophecy needs to play out in some way – that is the reason for the journey traveled by the main players, after all. I will tell you this: I cried at one point during the last few chapters. There are endings, surprise revelations, and beginnings. The author could have gone in several different directions as she brought A Grim Series to a close. After finishing this book, I thought about those other possibilities, then I considered what the author chose to do. Rachel Stanley took readers down the right path.

As I read the Epilogue I thought: And so it begins.

Five stars to the author and for this final book in A Grim Series! Fans, what are you waiting for? It’s time to learn just how Emma and Blake’s story plays out in A Grim Ending. 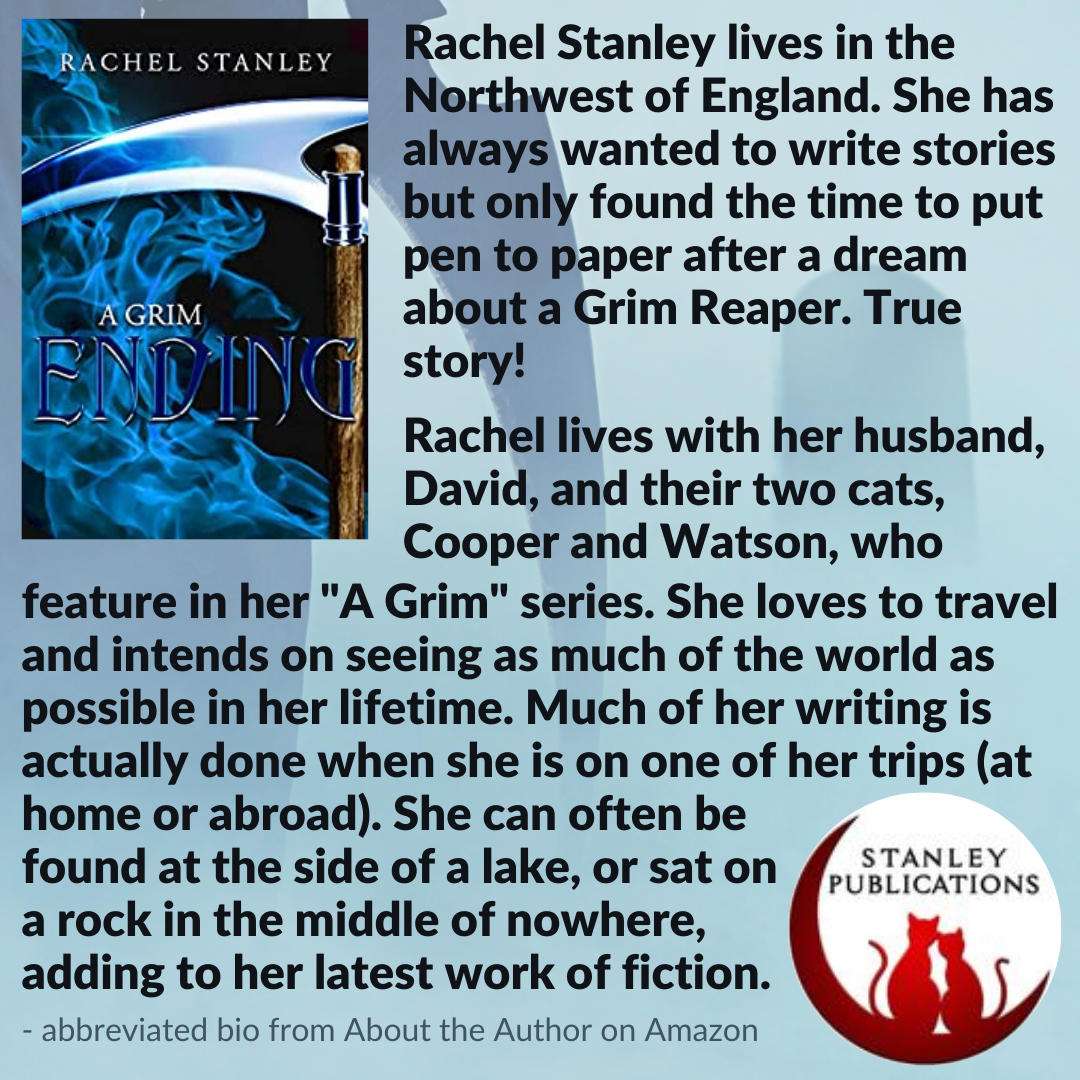