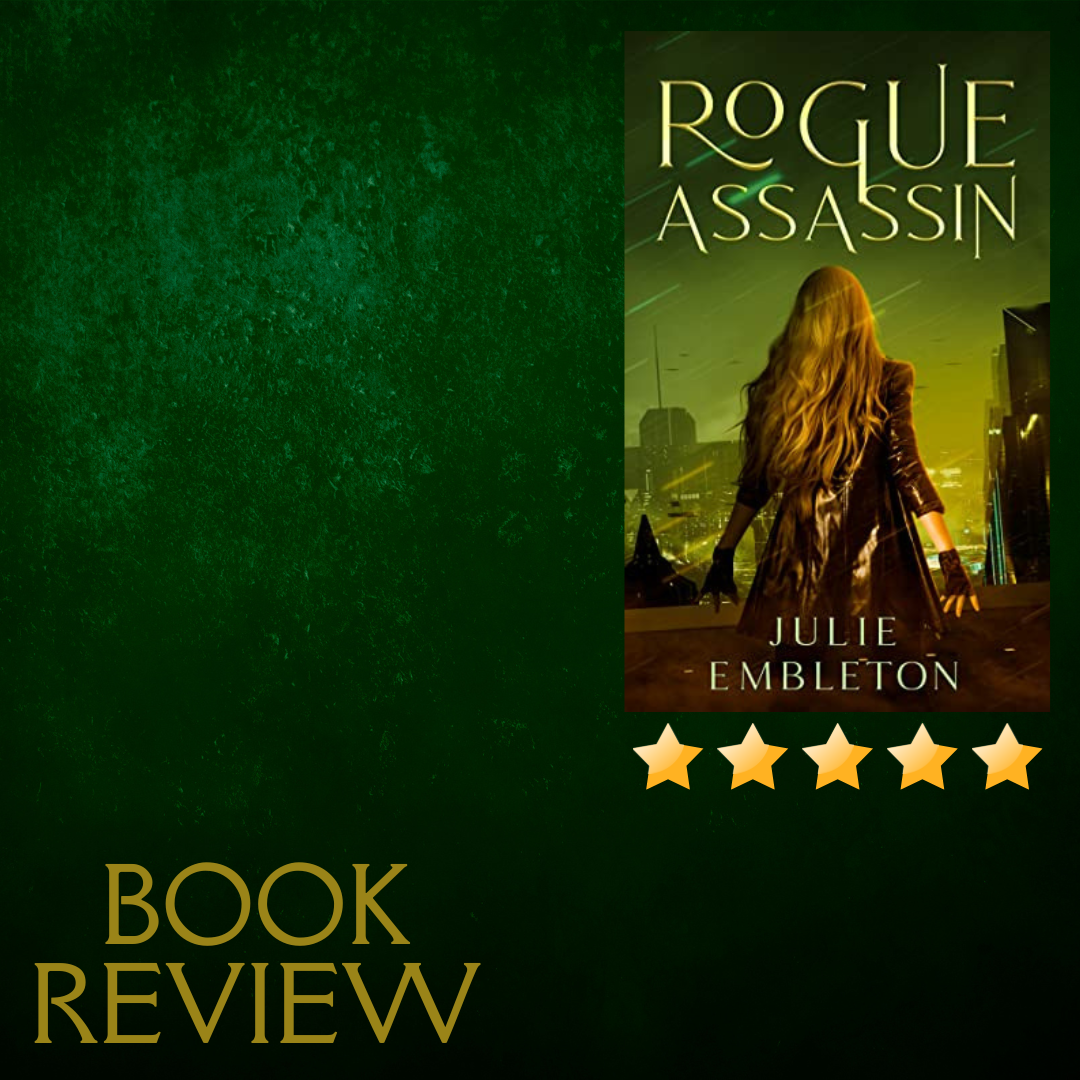 As a big fan of author Julie Embleton, I was excited to learn she’d published a standalone sci-fi novel I could scoop up while eagerly awaiting the release of the next book in her Turning Moon dark fantasy series. Rogue Assassin features a completely different cast of characters and challenges, but the style, detailed writing, depth of feeling, and perfect pacing you’ve come to expect from Embleton are all there.

The opening chapters introduce the two main characters, Joe and Leven, six years prior to the present-day storyline. Joe and Leven might be teenagers, but they are far from average. Joe, a Supernatural Breed (SB), hides his status behind a human façade. Leven – or to be more precise, eleven-oh-one-seventeen – is an SBA: a Supernatural Breed Assassin designed in a lab to hunt and kill SBs. She is kept behind a locked door at Newlands house, a facility where Joe’s father, a doctor, is involved with creating SBAs.

Themes played out over the course of this book include: living (surviving) in a bigoted society, genetic-engineering ethics, discovering self-worth, deep friendships, and love.

It’s in these early chapters where themes are planted, and character personalities form a foundation for what is to come later in the book when the reader returns to the present day. Teenaged Joe, bullied at school and navigating an anxiety-ridden home life, develops a kind heart, one that cares very deeply for the emotionless SBA he meets while undergoing tests at Newlands house. Leven, constructed in a Petri dish, is curious about Joe – also created in a lab by his distant and disappointed father – but her design does not allow her to experience real feelings for him.

Fast forward six years. Young adult Joe now lives with his “found family” – a mix including a pure breed vampire, a wing-shifter, and a human. The inexperienced band of rebels battles tirelessly against Section 26, the agency determined to eradicate SBs with cyborg Handlers and lab-birthed assassins (SBAs). As Joe & Co. work and fight in secret to destroy Handler Hubs, rumors of a lone rogue assassin circulate. Are the stories true, and is the rogue also targeting Section 26?

I spent a significant amount of time reading this book in a very detached way, which is unusual for me. When I realized I was doing this, I paid attention to when I slipped into said detachment. I noted it happened when I was reading from Leven’s perspective and not when Joe was on the page. I believe this is meaningful. Leven struggled to recognize feelings and experience her own. Joe, to me, is a very emotional character. Not in a weepy, handwringing sense, but in a thoughtful, caring way. He is strong, determined, and willing to love and be loved. I “felt” him more deeply.

I wondered: Did the author craft the story in such a way that the reader could experience these two very different characters with both an emotional connection and detachment? Maybe. Intentional or not, it worked for this reader.

And yet, halfway through the book, I was very much attached emotionally to ALL the characters in Joe & Co. – Leven included – as they fought Section 26 and struggled to survive. A standout side character for me was Scott, the angry wing-shifter who starts out as no fan of Leven’s. A surly and unfriendly character at the beginning of the plot, Scott wins your affection over time. There is a scene in particular when he is injured, and Embleton writes from Leven’s perspective:

Wretched wet, crunching indicated Scott trying to shift, and his human wails, breaking to morph into ragged caws, had her scrambling off the bed…Another sickening crunch preceded a strangled cry.

And Embleton is not afraid to break your heart with trauma and death. Be prepared to hold your breath more than once. Be ready for tightness filling your chest when characters are brought to the edge of death – and one slips over.

This world contains a broad spectrum of supernatural beings. Embleton’s creativity was in full force when she brought demons onto the page. Demons like Draincleaner, with his long arms allowing his fingers to *almost* touch the filthy water running through the sewer as he walked, painted a real picture in this reader’s brain. Fight scenes with SBAs, Handlers, and Joe & Co. were marvelously described – I could “see” them like I was watching an action film.

Once again, Julie Embleton developed characters who now live in my head. Beyond Joe and Leven, side characters Alex, Cora, and Scott tempt me to wonder about their futures. When you keep thinking about characters as real people long after you turn the last page, you know the author wrote something extraordinary.

Five stars to Julie Embleton for Rogue Assassin! Author, if you are considering a follow-up book to this one, this reader is for it! 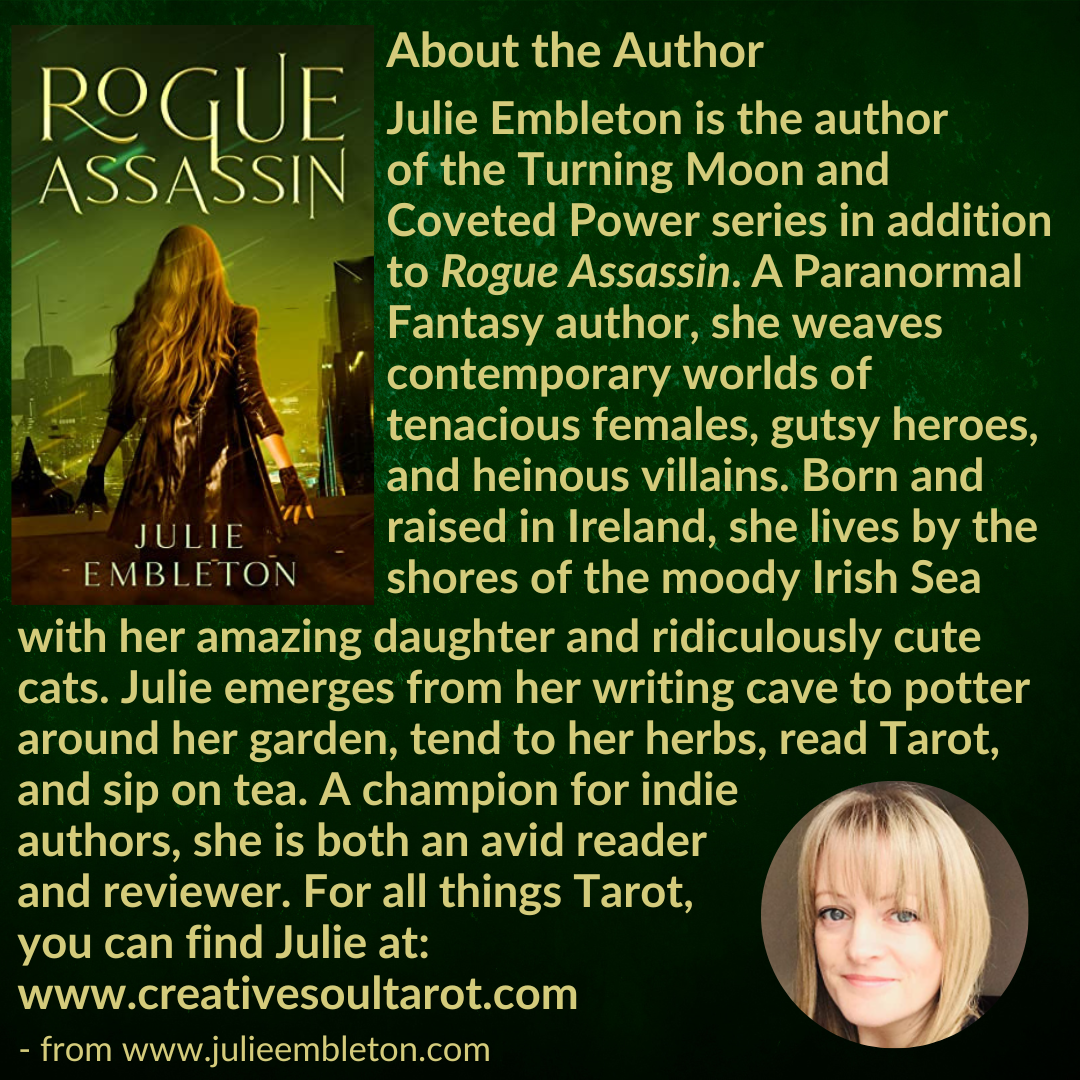