😮Imagine waking up to a wonderful 5-star review for a story that poured out of your heart. Imagine it came from an author you respect, who is a voracious reader, and is one of the most delightful Instagrammers you’ve met. Imagine you woke up to a review from the always devilish and never disappointing Mr. Bruce Spydar, author of the Shy Backpacker Series.

Get your copy of A Thin Witchline Between Love & Hate here: https://www.amazon.com/dp/B09VVCLXPX

Bruce writes: Most captivating read of the year so far! – After enjoying T L Brown’s Door to Door series at the start of the year, this one became a must-read book … and, I have to say, it was possibly the best book I’ve read this year. As a 50+ male, I never thought I would be so entranced by paranormal fantasy (nor get a crush on a fictional witch!), but the author pulled me into Lucie’s world and had me totally absorbed.

Several of the main characters from Door to Door make an appearance and, although this is a standalone series, I certainly got more out of it having read the Door to Door series first (this one starts where the other finished). Templeton and Rabbit are centre stage alongside Lucie, and the depth of their characters and dynamics between them are beautifully crafted. In an absorbing first instalment, we encounter a familiar villain and also a new one who takes despicable to a new level.

There are few authors I’ve discovered that have drawn me into a fantasy world in such a compelling and relatable way. I can’t wait to read the next part.

Read the author’s blurb and, if you’ve got half a mind to read it, then dive in … you won’t be disappointed.

❤️Thank you, Bruce! Lucie’s first book was such a labor of love… Lucie is very near and dear to my heart. And of course, so are Templeton and Rabbit – even though Templeton can’t seem to get out of his own way and Rabbit can’t seem to catch a break! 😖 The second book in the series, Crossing the Witchline, is being written now and my fingers are crossed for a summer release. I can’t wait to tell you – through Lucie – what happens next. 🔥 Expect some more drama and chaos, a couple of twists… and more burnt vanilla. 😉 Thank you again for such a fantastic review, Mr. Spydar! 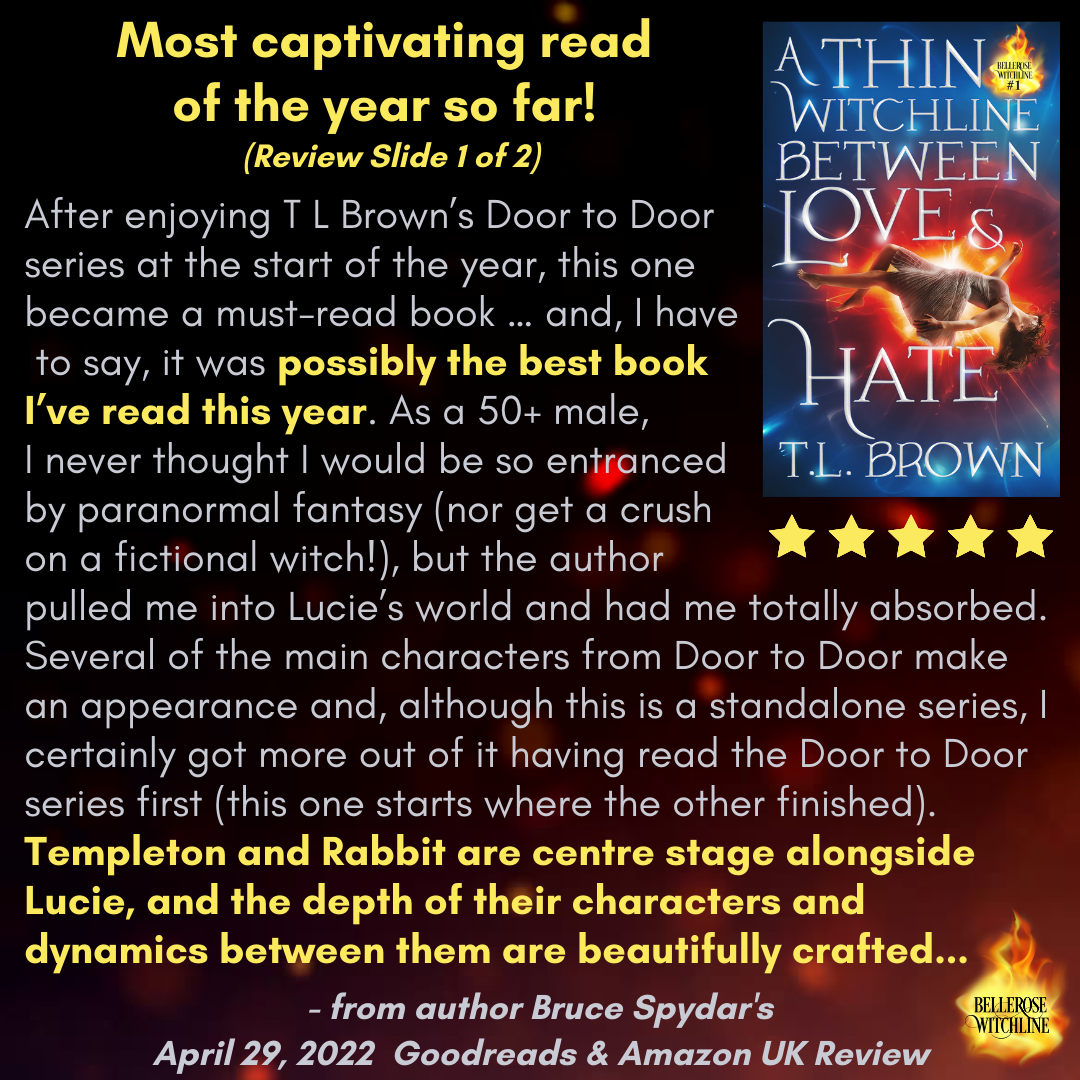 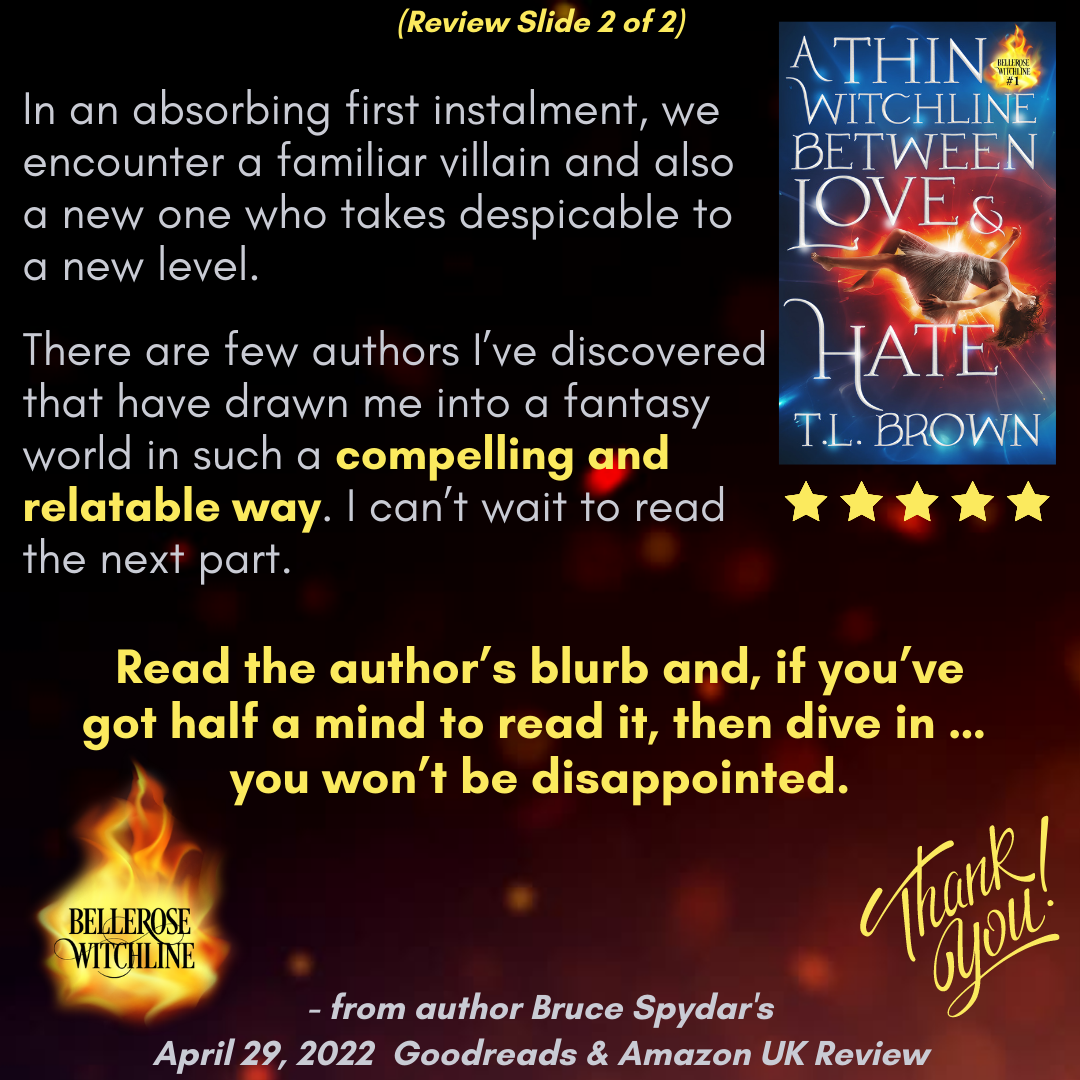 Witch politics, maddening men, a desperate demon, and monsters from above blow apart Lucie Bellerose’s world. Can she still save her thinning witchline?

Join Lucie as she navigates maddening men, witch politics, controlling her growing power, a fiery temper, a desperate demon… and ‘monsters and beasties’ when doors to other worlds begin to open.

(Readers of T.L. Brown’s Door to Door trilogy will also recognize fan favorites John Templeton and Rabbit – learning even more secrets about the two most important men in Lucie’s life. A Thin Witchline Between Love & Hate also serves up a whole host of new lovable and terrifying characters.)

Step into Lucie’s world and find out why readers have called A Thin Witchline Between Love & Hate “an adventure filled with sexy tension,” “a captivating read,” “sexy,” “suspenseful,” “darker,” and “scary AF!”

Get your copy here: https://www.amazon.com/dp/B09VVCLXPX