It’s day 11 of the #TopsyTurvyTVTour over on Instagram! Yesterday I provided a snapshot from a scene in my upcoming book, Doors Wide Open. Today Tara Parker-Jones decides to step into the role of Buffy the Vampire Slayer. Here we go…

(This is a derivative work based on the TV program Buffy the Vampire Slayer. No specific episode chosen.)

Today’s scene featured a standoff between Buffy and a terrifying energy vampire. Emily was cast as Buffy. Tara would play a witch named Willow and a “guest star” would serve as another member of the Buffy posse –a character called Xander.

“What kind of name is Xander?” She scowled, tossing the script on the table. Emily-as-Buffy was to act out a fierce display of martial arts as she took down the vampire.

“She’s not the only one with moves.” Tara waved her arms in a series of karate chops, mixing in a few high kicks.

A knock on her dressing room door startled her. She put her hand to her chest.

“Marley?” Tara opened the door to find her bookstore assistant. “What are you doing here?”

He shrugged, entering and setting a tray of neon orange frosted cupcakes by the Buffy script. “I think I’m some sort of guest star in a play. Do you know anything about it?”

“Guest star, huh?” Tara pulled on her bottom lip. “Do me a favor. Emily’s in a room down the hall. Her name is on the door. Tell her filming’s been delayed until tomorrow.”

Fade out, Fade in…

“The set must be in another building,” Tara panted. They rounded the corner of the next building and nearly smacked into one unholy being. 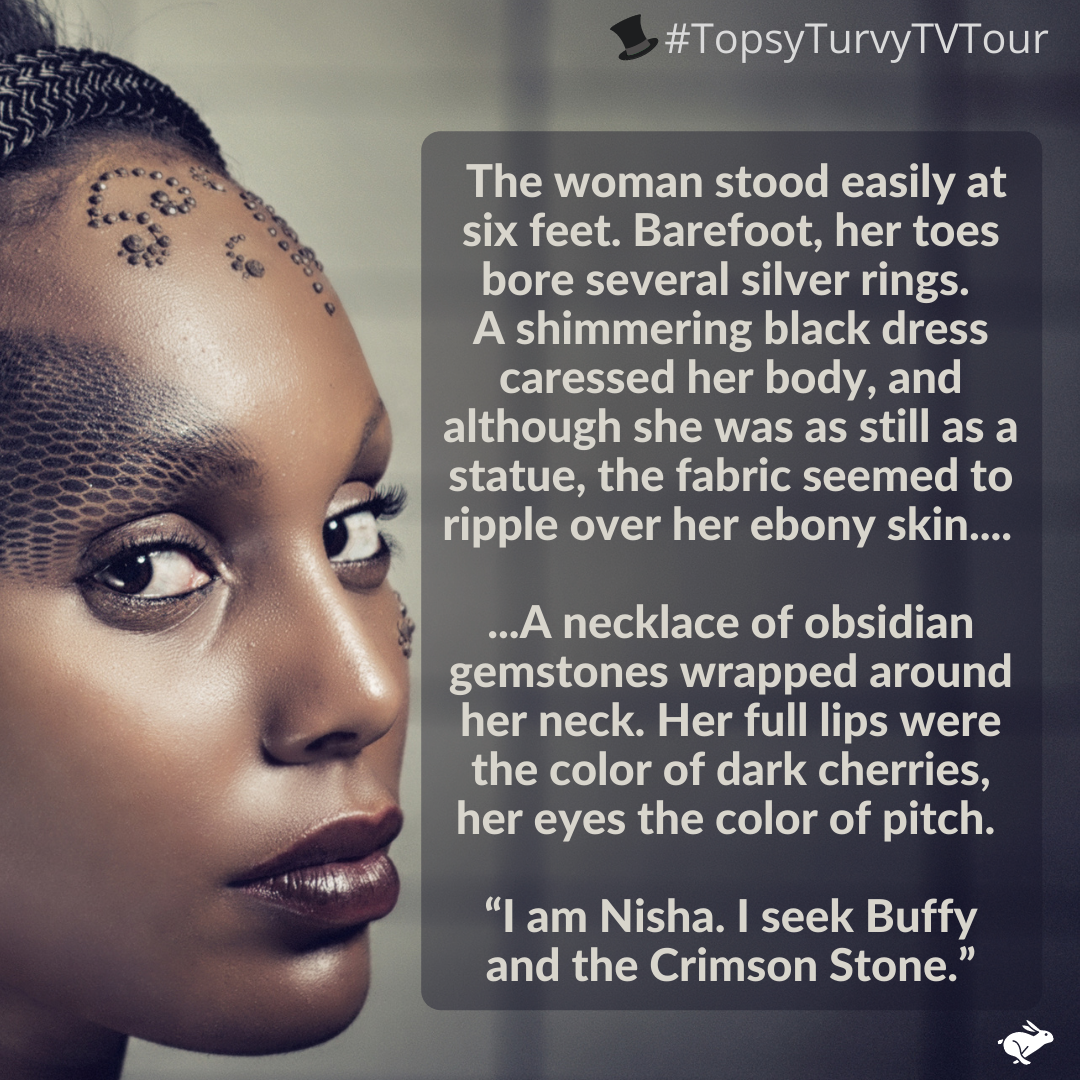 The woman stood easily at six feet. Barefoot, her toes bore several silver rings. A shimmering black dress caressed her body, and although she was as still as a statue, the fabric seemed to ripple over her ebony skin. Her midnight-colored hair was piled high on her head in more than a dozen thick bantu knots, each one wrapped with a thin silver chain. A necklace of obsidian gemstones wrapped around her neck. Her full lips were the color of dark cherries, her eyes the color of pitch.

“I am Nisha. I seek Buffy and the Crimson Stone.”

Tara swallowed as she and Xander backed away. “Right. That’s Emily Swift’s role. Stay here. We’ll go get her for you.”

… Tune in tomorrow as Door to Door characters play a ‘friendly’ game of Thanksgiving football. 😉 (Now posted! Click here for that scene.)