It’s day 12 of the #TopsyTurvyTVTour over on Instagram! Yesterday Tara Parker-Jones and Marley ran smack into an energy vampire. Today Emily Swift and crew play a serious game of Thanksgiving football. Here we go…

(This is a derivative work based on the TV program Friends – episode: The One with the Football.)

The sunlight warmed the café through the window.

Anne closed The Daily Brew Too in observance of the Canadian Thanksgiving, inviting Emily, Jack, Tara, Marley, Rabbit, and Lucie to a turkey dinner. Templeton was invited, but he declined.

“I love to cook –and I’m grateful for Canadians. They’re good neighbors.” She hummed as she peeled potatoes.

“That sounds like something Lydia would say,” Tara stage-whispered to Emily.

Emily raised her eyebrows, nodding. “Can we help with anything?”

“I’m good here. Why don’t you go down to the park? I bought a football.” Anne nodded toward the door. “We’ve got at least an hour. Go have fun.”

Emily shrugged, grabbing the football. The little crew headed for the park.

“Captain one here!” Tara called out when they hit the grass.

“Captain Two!” Lucie followed. They flipped a coin and Tara got first pick for her team.

“Rabbit,” Lucie crooked a finger at her friend.

Tara looked from Emily to her assistant Marley. “Um…”

“Real nice,” Emily hissed at Tara. She joined Lucie and Rabbit and the three huddled together. “Let’s destroy them.” 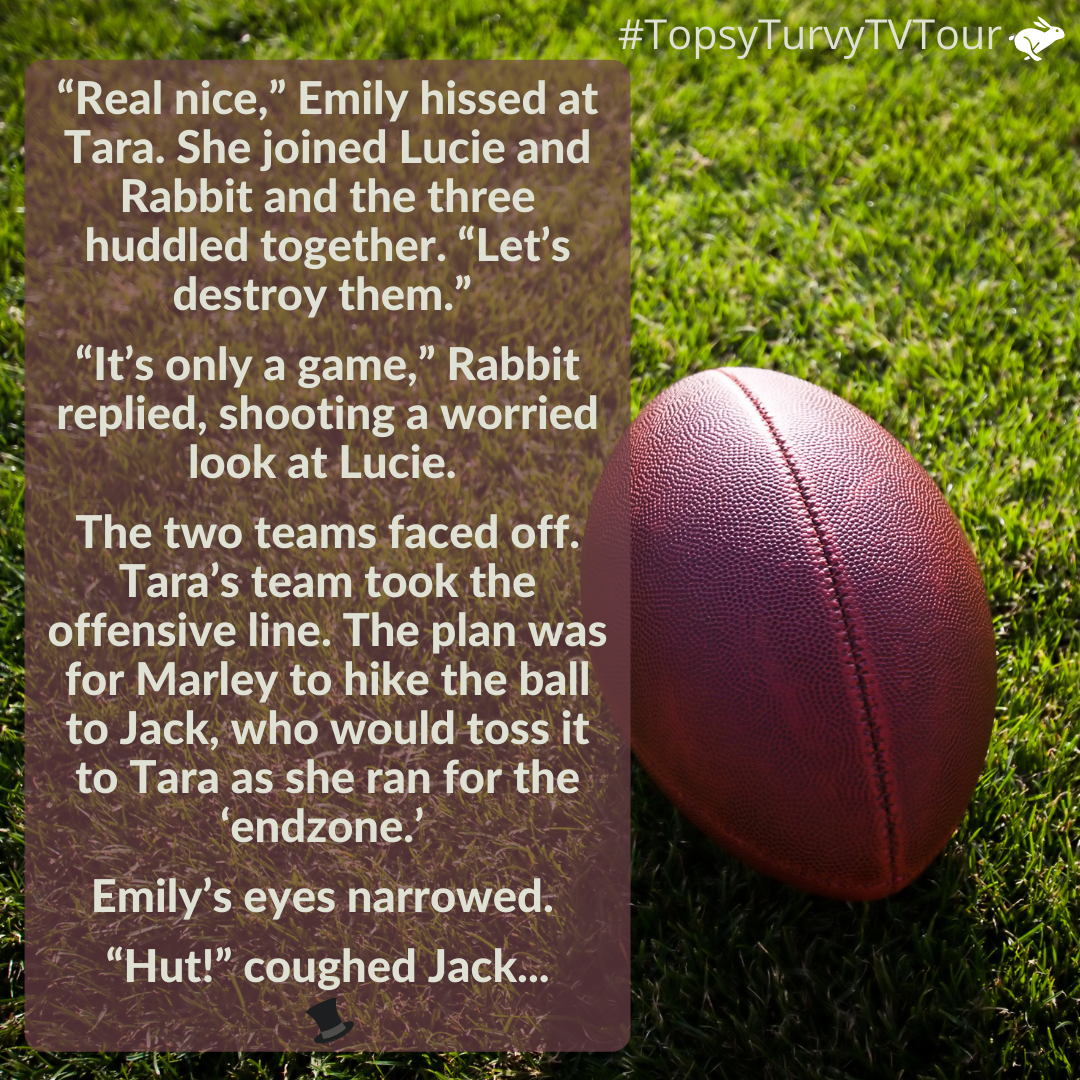 “It’s only a game,” Rabbit replied, shooting a worried look at Lucie.

The two teams faced off. Tara’s team took the offensive line. The plan was for Marley to hike the ball to Jack, who would toss it to Tara as she ran for the ‘endzone.’

“Hut!” coughed Jack. Marley sent the football back through his legs. Jack jumped and snagged it out of the air. Lucie and Rabbit easily shoved past Marley. Jack lobbed the ball toward Tara.

“I don’t think so!” Emily yelled. She dove at her friend. Tara shrieked and kicked her. Emily crumpled, her hands wrapped around her knee.

A bored Salesman watched from a distance. Templeton tsked, picking a piece of lint from his sleeve. “She should have gone for the interception.”

… Tune in tomorrow as Door to Door characters hold a meeting at The Office. (That scene is now posted! Click this link.)