It’s day 15 of the #TopsyTurvyBookTour over on Instagram! Yesterday Emily chatted with her girlfriends in the parlor… today she’s meeting Chloe Martin in a BBQ joint. Here we go…

(This is a derivative work based on the original cozy mystery by Brook Peterson.)

Emily listened to Lucie and Tara discuss the merits of men in leather pants for about 1.2 seconds before ditching them and following Anne through the kitchen door.

On the other side, however, she stepped inside a busy BBQ joint -a rustic place with worn wooden floors. The Vintage Grill appeared in fancy chalk lettering on a board behind the counter. The aroma floating out into the dining area was heavenly and patrons feasted on top of red and white tablecloths.

Emily’s stomach growled. She stepped up to the counter and nodded at the woman who moved aside to make room. She was probably in her mid-20s, with pretty golden-brown hair pulled up in a messy bun.

“Jeannie will be right out. Her husband works the pit out back,” the younger woman explained.

“Great,” Emily said. She was about to risk being labeled as crazy and ask the woman exactly where they were, when her ‘I feel like I’m being watched’ radar kicked in. Emily glanced over her shoulder.

Templeton stood just inside, hands on his hips. His nostrils flared once before he leaned back out through the entrance. Emily couldn’t hear what he was saying over the din, but a moment later, Rabbit appeared. He left Templeton with his sour puss at the door and joined her at the counter. 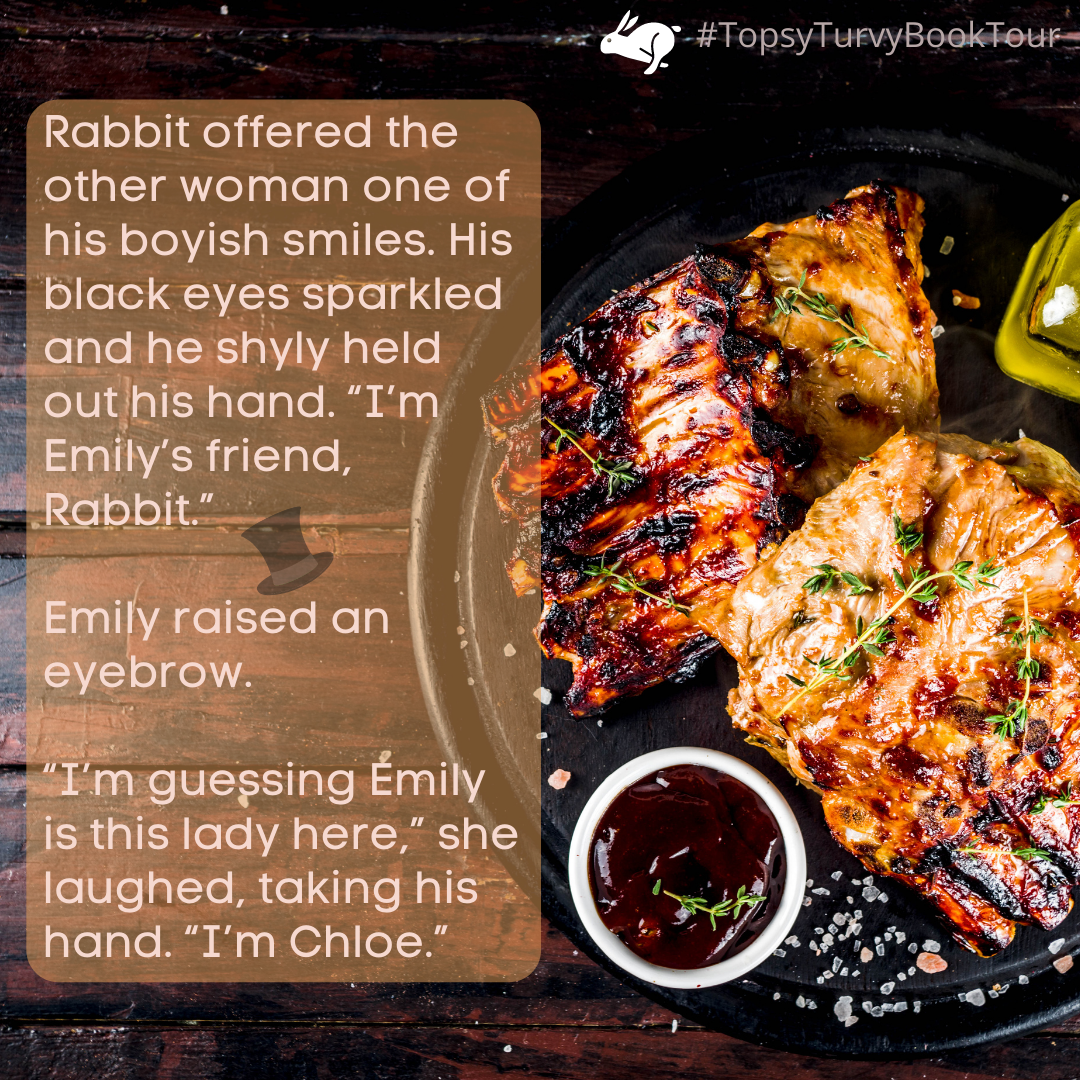 Rabbit offered the other woman one of his boyish smiles. His black eyes sparkled and he shyly held out his hand. “I’m Emily’s friend, Rabbit.”

“It’s very nice to meet you,” Rabbit blushed. Emily fixed Templeton with a stare and motioned to him. He ignored her and searched for a piece of lint on his sleeve.

“Who is the guy in the top hat?” asked Chloe. Emily opened her mouth to say ‘a pain in the butt’ when a deafening crash rang out from the kitchen accompanied by shouts of ‘get the hell outta here!’

…stay tuned as tomorrow Door to Door characters are chased right into Around the World in 80 Days! (That post is now live- click here!) 🙂

Are you a writer? Please join us! Drop your characters into an indie author’s work (like I did with Brook Peterson’s A History of Murder) and post it on Instagram! Use the hashtag #TopsyTurvyBookTour & tag hosts @saffron.amatti, @elenchase, and @writertracybrown so we can see your characters in another’s book!

🐺For this #IndieFeatureFriday hosted by @netts_

It's #WIPWednesday! Current WIP: 🔥Crossing the