It’s day 16 of the #RockTheTurvy writing challenge over on Instagram! Yesterday Templeton, Lucie, and some fireflies almost had a moment. Today things get a little explosive.

To the tune of: Gasoline, by Audioslave.

Tara left the convenience store, twisting the cap on her water. Her gaze drifted to the left and she noticed a black SUV with tinted windows parked across the road. She paused, remembering her wild adventure with Emily when they traipsed all over the Empire chasing her friend’s mom. This SUV looked a lot like the one hounding them back then.

Closer, a nondescript man pumped fuel into a red plastic gas can. As she passed by, she made eye contact with him. He startled, quickly turning his head. Her nose wrinkled. Something felt… off.

“Hey Em?” Tara called out as she hurried. “Emily!”

Around the line of pumps, Emily put gas into their own SUV. Rabbit was back in the driver’s seat and she’d been riding shotgun. The stereo blared out the open window. “What?” she yelled.

“I have a weird feeling about that guy.” Tara motioned to the other side of the pump station. 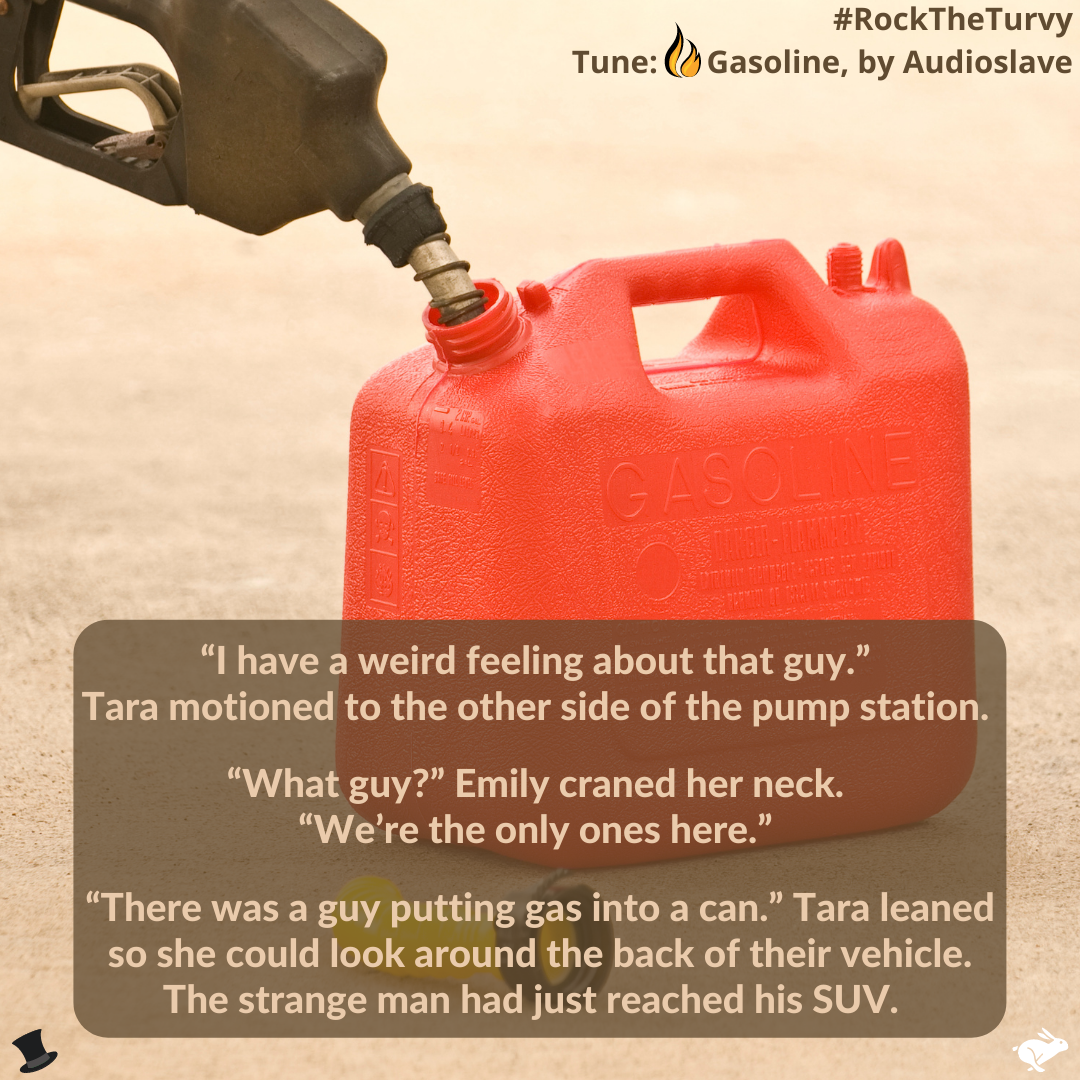 “What guy?” Emily craned her neck. “We’re the only ones here.”

“There was a guy putting gas into a can.” Tara leaned so she could look around the back of their vehicle. The strange man had just reached his SUV. The nozzle of the gas can pointed toward the ground. A trail of gasoline led from the pumps across the rural road. He tossed the empty can into a ditch.

Emily was screwing the cap back on the gas tank when Tara spun around. “We’ve got to go! Get in the car!” Frantically, she pushed Emily toward the closest door and climbed in after her, punching the back of the seat and shouting for Rabbit to GO-GO-GO! Rabbit tromped the gas pedal.

“Where are we heading?” Mr. Gas Can Man asked as he shifted into drive. He glanced into the rearview mirror.

Sebastian eyeballed the lit cigarette in his hand. It really was a filthy habit – and for all his bad habits, this was one he no longer enjoyed. He flicked the cigarette out the window. He watched as the wind rolled it into the fuel trail. The vehicle sitting at the pumps barely made it out of the station before the line of fire hit its target.

…Tune in tomorrow as the D2D crew goes to a Mardi Gras parade. Who gets separated from the others? Who finds her? (That post is now available… find out here!)

🎶 Listen to Gasoline by Audioslave on YouTube here: https://youtu.be/0XVCc5zwPlU