It’s day 16 of the #TopsyTurvyBookTour over on Instagram! Yesterday Emily, Rabbit, and Templeton were on the run again, leaving their lunch behind in a busy BBQ joint. Today they’re hopping a train and leaving Jericho Falls. Here we go…

(This is a derivative work based on the book Around the World in Eighty Days, by Jules Verne. I’ve also included a nod to A History of Murder, by cozy mystery author Brook Peterson.)

As the Fringe erupted from the kitchen, Emily and Rabbit twisted away from Chloe to make an escape.

Templeton was already outside. The three ran down the street and rounded a corner, passing a tall, blond policeman who dropped his aviators to compare the trio to a wanted poster in his hand. Green eyes studied the grainy image. Were these the bank robbers from Lakeview? Office Garner gave chase. “Police! Stop and put your hands in the air!”

“There!” Rabbit pointed. “A train’s pulling out of the station!”

Arms and knees pumping, they ran for the train. Templeton’s legs were longer, but Rabbit was faster. He jumped and swung up on the platform of the last car. He held his hand out to Templeton.

“Move it, Emily!” Templeton gritted as he grasped Rabbit’s hand and was yanked upwards.

Emily ran as hard as she could but with the train gaining speed, she’d never make it. Feeling a wave of fear roll over her body she harnessed the energy and focused on the train car’s door behind the two men. She door traveled off a train before, now she would door travel onto one. The catch was she wasn’t touching a handle.

But in stories, of course, characters sometimes do the impossible. 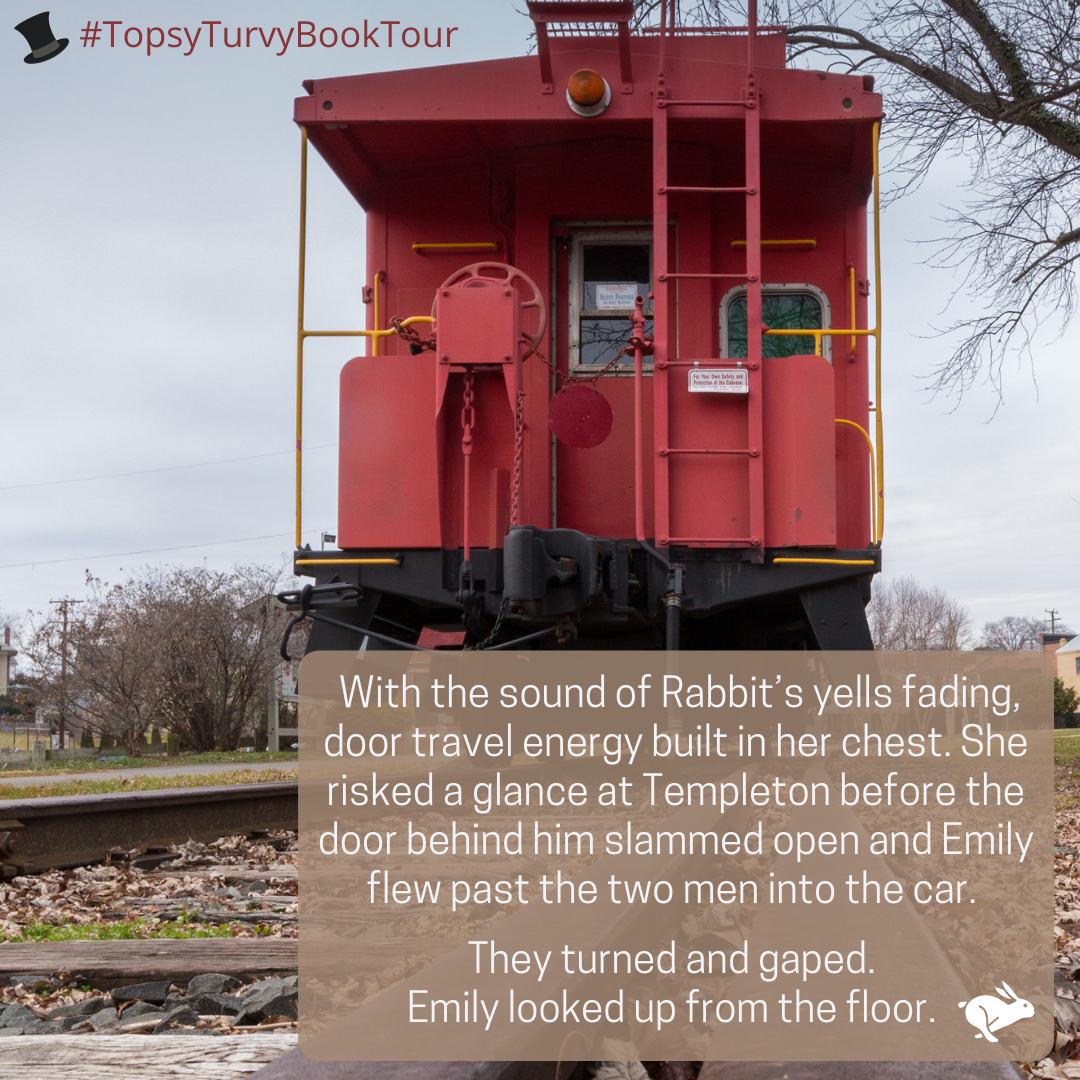 With the sound of Rabbit’s yells fading, the energy rose in her chest. She risked a glance at Templeton before the door behind him slammed open and Emily flew past the others into the car.

They turned and gaped. Emily looked up from the floor.

“That was quite an entrance,” Rabbit said, helping her to her feet. She joined the men on the small platform. The policeman no longer in sight, the trained rushed by a sign indicating Jericho Falls – providing a clue as to where they’d been. But now where were they going?

The train was like the ol’ timey ones used for novelty rides. However, on the outside of the car by the door a plaque declared: Transcontinental. Depart: San Francisco. Arrive: New York.

…stay tuned as tomorrow Door to Door characters DO NOT arrive in New York, but instead find themselves in London where they meet Sherlock Holmes! (Now posted here!) 🙂

Are you a writer? Please join us! Drop your characters into Around the World in Eighty Days and post it on Instagram! Use the hashtag #TopsyTurvyBookTour & tag hosts @saffron.amatti, @elenchase, and @writertracybrown so we can see your characters in Jules Verne’s book!