It’s day 17 of the #RockTheTurvy writing challenge over on Instagram! Yesterday things got a little explosive. Today, Lucie gets separated from the others during a night parade. Who finds her?

To the tune of: Carnival, by Natalie Merchant.

The Mardi Gras Night Parade was a swirling cacophony of music, colors, and partygoers, and the D2D crew struggled to stay together in the chaos. They’d indulged in Carnevale masks for the event: the ladies choosing feathered half-masks while Rabbit and Templeton opted for full-face Venetian Bauta disguises.

The crowd surged and the five were pressed toward the street. Emily and Tara locked arms. Rabbit grabbed Lucie around the waist as she was shoved forward, but she was easily torn away. Spinning, she reached for Templeton’s outstretched hand, their fingertips grazing before she was whisked off in a current of people.

“Up you go!” A man dressed as a circus strongman lifted her onto a packed parade float. Lucie sighed, picking her way through the elevated revelers.

Sebastian’s eyes tracked her as she moved from left to right. He met Lucie as she reached the corner of the float. He lifted his hands, mouthing below his own half-mask: Need help? 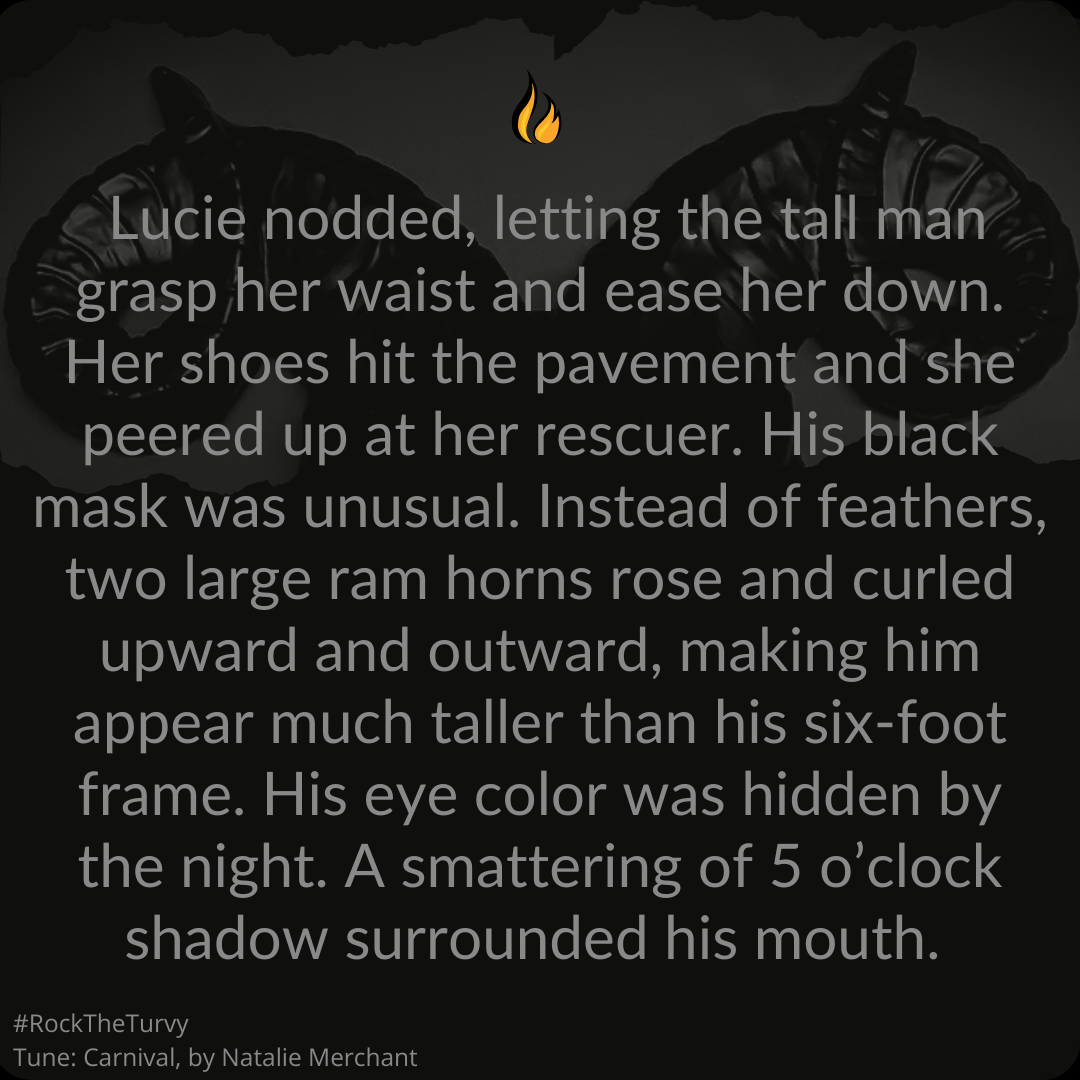 Lucie nodded, letting the tall man grasp her waist and ease her down. Her shoes hit the pavement and she peered up at her rescuer. His black mask was unusual. Instead of feathers, two large ram horns rose and curled upward and outward, making him appear much taller than his six-foot frame. His eye color was hidden by the night. A smattering of 5 o’clock shadow surrounded his mouth.

The float drifting behind them played Carnival. The mysterious man kept hold of Lucie, swaying with the music. She shook her head, the red feathers lining her mask fluttering. The stranger pouted cutely, tilting his head to the side. Rolling her eyes and laughing, Lucie acquiesced, lifting her arms and dancing.

“The Ram” twirled her and as Lucie felt his hands slide away, she came face-to-face with Big Rabbit. The massive man growled, fixated on the space behind her. Lucie turned. Her dance partner was gone.

Big Rabbit pressed an envelope into her hand. Putting an arm around her shoulders, he eased them through the crowd.

🎶 Listen to Carnival by Natalie Merchant on YouTube here: https://youtu.be/DMxXt6MM2ro