It’s day 17 of the #TopsyTurvyBookTour over on Instagram! Yesterday Emily, Rabbit, and Templeton hopped a train to escape the Fringe – and the police – in Jericho Falls. Today they’re rolling into London and meeting Sherlock Holmes. Here we go…

(This is a derivative work based on the short story The Final Problem, by Sir Arthur Conan Doyle.)

The three were lulled into napping during the trip, the car rocking side-to-side.

When the train rolled into the next station, Rabbit was the first to the door, his nose twitching. “Another period piece,” he observed.

The trio disembarked from the train, moving away from the station with the crowd. The city around them buzzed noisily – and smelled terrible.

Emily pinched her nose closed. “Ugh! What is that?”

“Nineteenth century dung,” replied Templeton. Horses, carriages, and hansom cabs raced by, while people hurried into one another, all in too much of a rush to pay attention to the oddballs on the side of the street. The corners of Templeton’s lips turned down. “London again.”

“Really? What book are we in now?” Emily spun in a circle as she took in the sights. “I’ve never been to London!”

Emily noted a particularly lanky man strolling closer, his interest turning to the group. He slowed, studying them as he passed, giving considerable attention to Templeton. Templeton met this examination with an amused smile. The man frowned back but continued onward.

A scraping sound above caused Emily and Rabbit to look skyward. A brick tumbled from a rooftop, its target the unsuspecting man below. Rabbit reacted quickly, pushing him aside as the brick slammed into the ground where he once stood. The four of them stared at the block.

Finally, the man spoke: “I appreciate your assistance. Should you ever need the services of a consulting detective, please find me at 221b Baker Street.” 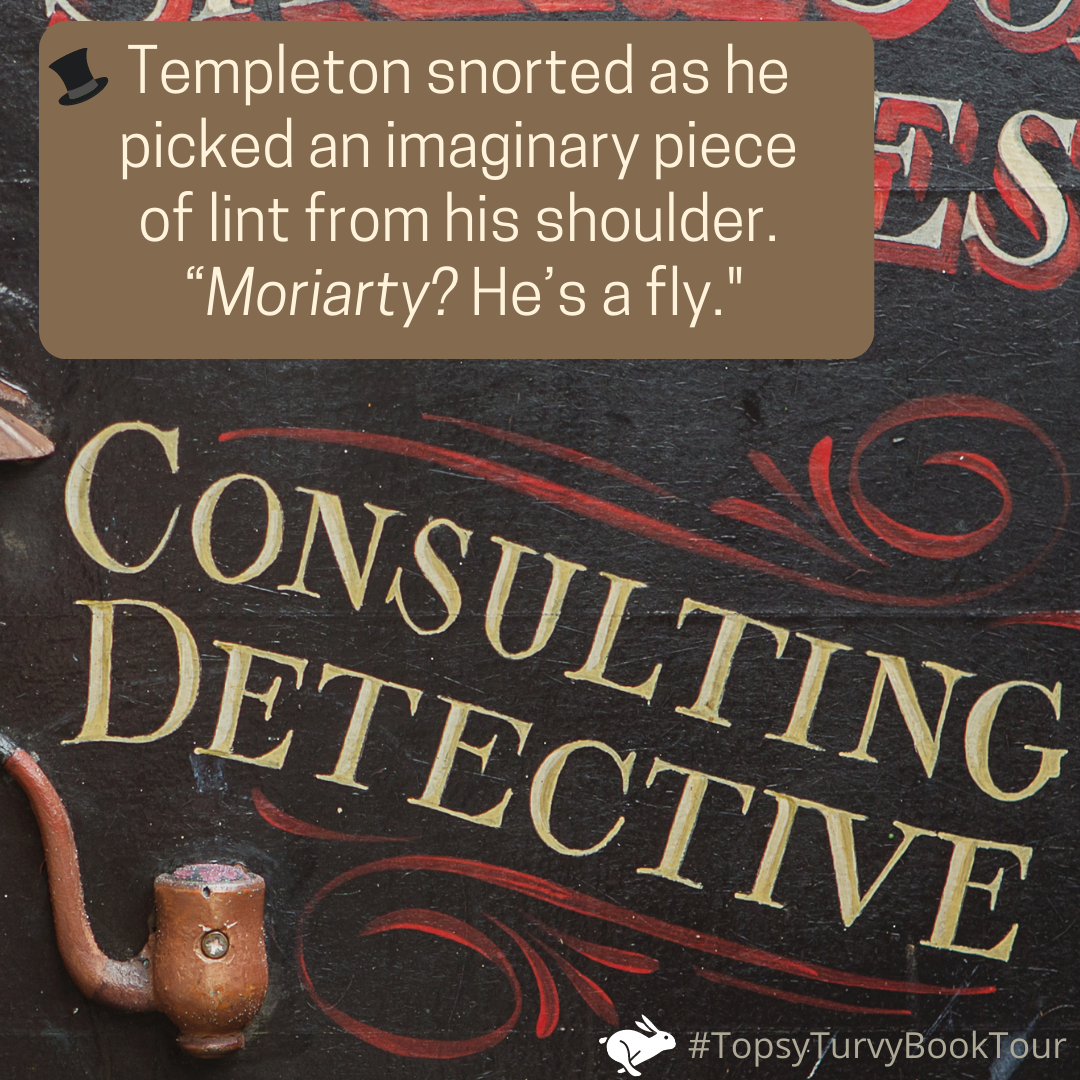 Emily’s mouth popped open, but Rabbit grinned. “Will do.”

Sherlock Holmes nodded once, then resumed walking down the dirty street.

“Amazing,” breathed Emily. She looked at Templeton. “Hey, you could play Professor Moriarty.”

Templeton snorted as he picked an imaginary piece of lint from his shoulder. “Moriarty? He’s a fly.”

…stay tuned as tomorrow the writing prompt is Mary Shelley’s Frankenstein – but I’m going to cheat a little. Don’t worry, it’s going to be fun! (The fun’s begun! Click here for the next post!) 🙂

Are you a writer? Please join us! Drop your characters into any Sherlock Holmes stories and post it on Instagram! Use the hashtag #TopsyTurvyBookTour & tag hosts @saffron.amatti, @elenchase, and @writertracybrown so we can see your characters in Sir Arthur Conan Doyle’s work!