It’s day 18 of the #TopsyTurvyTVTour over on Instagram! Yesterday Rabbit practiced a surf tune. Today Emily Swift finds herself sucked into another dimension. Here we go…

(This is a derivative work based on the TV show The Twilight Zone.)

At least this one is appropriate, she thought. She would play Bettina Miller, a girl who gets thrust through a portal into the 4th dimension.

Big Rabbit poked his head into the dressing room. “Rabbit sent me. You’re expected on the set.”

📺 COMMERCIAL BREAK: Love fantasy? How about one with a portal to another realm? Then check out The Realm Saga: three books by the creative Jessica Cantwell! 📺

Narrator: Due to go missing: One curious 30-year-old. Name: Emily Swift. Last seen being led to the set by a Rabbit. Present location? Let’s say for the moment… in the Twilight Zone.

“…and Rabbit told me to let you know someone’s been messing with the Empire’s four directional doors. He thinks it’s the Fringe. Emily? Emily?”

Emily paused in the hallway. She’d catch up with Big Rabbit. There was just something moving -no!- rippling over the surface of the wall. Her hand chased the wave, her fingertips touching the blurred edge.

CRACK! A split in the wall sucked her from the hall and into a confusing landscape, one with mammoth abstract crystals thrusting up from the ground. Or were they pointing from the sky? No, from the ground. Disoriented, Emily dropped to her knees and covered her eyes. A sharp whine reached her ears. Risking dizziness, she peered through her fingers. 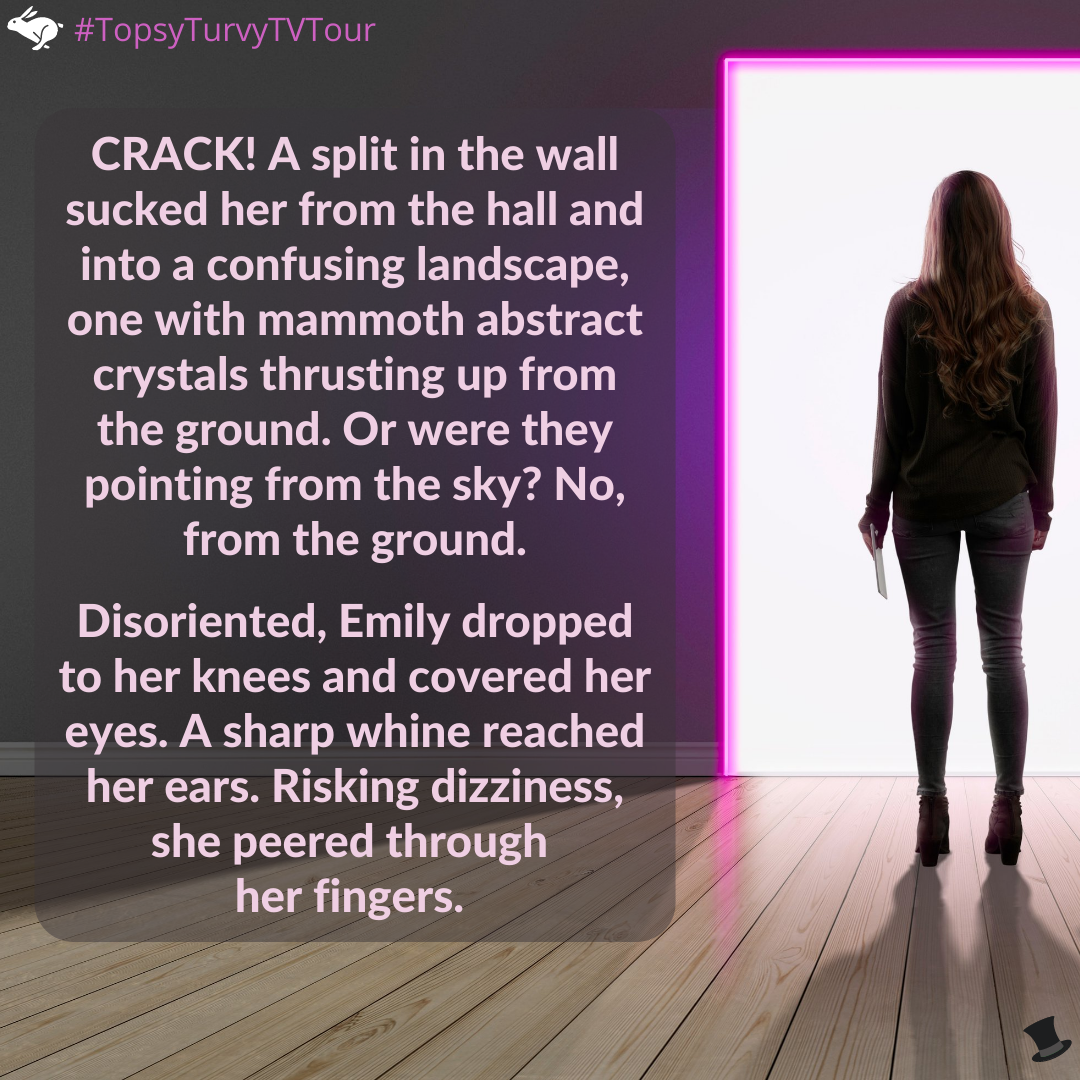 A featureless being of the whitest white vibrated in the air. Tall and narrow -not thin, NARROW– it advanced. A tear appeared where Emily expected a mouth, allowing a band of blinding light to shoot out. The shriek filled her brain. Closing her eyes and covering her ears, she screamed with the terrifying creature.

A strong hand grasped her shoulder and yanked her backward through the wall and into the studio hall.

Safe in the silence, Emily stared up into a dozen pale faces, their deep brown eyes curious. She whispered to Rabbit: “I think I found another directional door.”

… Tune in tomorrow as Door to Door characters ponder The Big Bang Theory. (That episode is now posted. Click here!)