It’s day 2 of the #TopsyTurvyBookTour over on Instagram! Yesterday Emily, Rabbit, and Templeton were running from the Fringe in Alice in Wonderland. Today I’m dropping my Door to Door characters into Pride and Prejudice. Here we go…

(This is a derivative work based on the original book by Jane Austen.)

As she raced across the sunny field, Emily tossed a look over her shoulder to check if the deck of cards were still chasing her.

They weren’t. Relieved, she slowed her pace since the hem of her dress now touched the grass. Her pinafore gone, the waistline perched higher while the neckline dipped. Ahead she saw a pleasantly set table under a canopy of tree leaves, its tablecloth fluttering.

When she slipped into the shade, Templeton stepped out from behind the closest tree, picking a speck of lint from his sleeve. His dark jacket, although now long in the back, was cut short in the front. A stiff, white collar poked up and out from under his chin. He held his top hat in his hand. He glanced at her attire once, then turned his attention in the opposite direction. 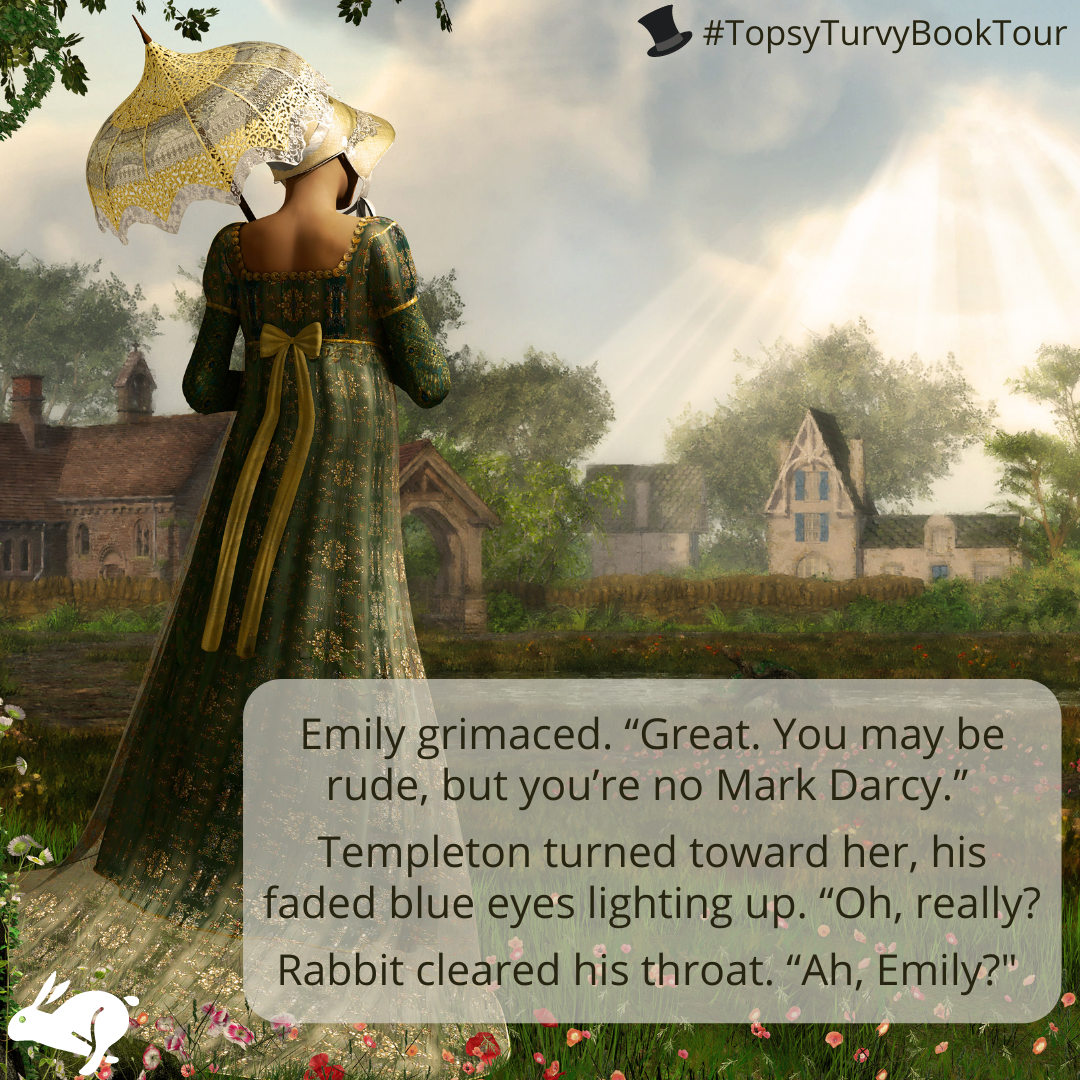 Before Emily could speak, she noted a rider on a black horse trotting across the field. As he drew closer, Emily saw it was Rabbit wearing a fine blue coat. “I had a top hat, too,” he said by way of greeting. “But it blew off.”

“No, but I think we’re somewhere in the early 19th century.” Rabbit dismounted. He motioned to Emily’s dress. “If we go by the clothing.”

Templeton moved past the table, frowning toward a large manor house on the other side of the field. “Jane Austen.”

Emily grimaced. “Great. You may be rude, but you’re no Mark Darcy.”

Templeton turned toward her, his faded blue eyes lighting up. “Oh, really?”

Rabbit cleared his throat. “Ah, Emily? Mark Darcy was in Bridget Jones’s Diary. I think you mean Fitzwilliam Darcy, or Mr. Darcy from Pride and Prejudice.”

Emily’s cheeks grew warm. She ignored Templeton’s smirk and pointed to the house. “Let’s see if anyone’s home before the Fringe shows up.”

…stay tuned as tomorrow Door to Door characters will be dropped into J.K. Rowling’s Harry Potter and the Prisoner of Azkaban. (Now posted!) 😀

Are you a writer? Please join us! Drop your characters into Pride and Prejudice and post the story on Instagram! Use the hashtag #TopsyTurvyBookTour & tag hosts @saffron.amatti, @elenchase, and @writertracybrown so we can see your characters in Jane Austen’s book!