It’s day 20 of the #RockTheTurvy writing challenge over on Instagram! Yesterday we took a break from the D2D crew’s road trip to give you a sneak peek from the first book in the Bellerose Witchline series. Today Lucie’s trying to rejoin her friends. What happens?

To the tune of: Snowblind, by Black Sabbath.

Lucie paused at the stop sign, grabbing the directions from the passenger seat. She flicked on the overhead light and scanned them. She was not happy about driving through the Walled Zone, but it was the fastest way to get to New York from the Empire.

She pulled on her lower lip. She must’ve missed a turn. Rolling her eyes, she spun the wheel and whipped a U-ey. A half mile back down the snowy rural road a deer jumped from the darkness, its eyes bright white in the headlights. Lucie slammed the brakes, fishtailing. Overcompensating, she slid off the road. The car stalled and attempts to restart it failed.

“Sonofa!” Lucie slapped the steering wheel. She checked the network phone Rabbit gave her. No service. How was THAT possible? 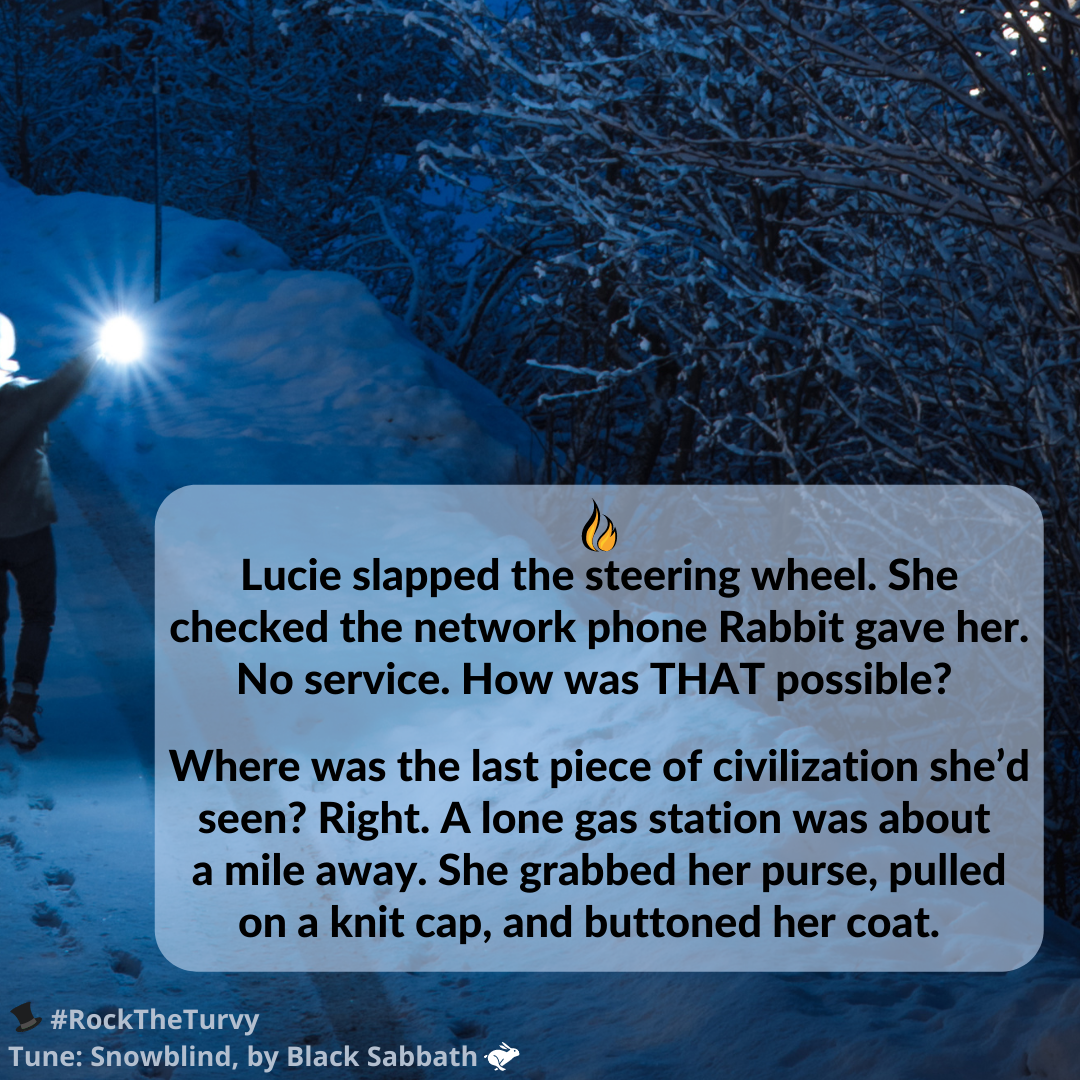 Where was the last piece of civilization she’d seen? Right. A lone gas station was about a mile away. She grabbed her purse, pulled on a knit cap, and buttoned her coat. Outside the car, Lucie lifted her palm and spelled up a soft glow. The little orb would light the way.

Ten minutes later, an SUV drove down the road toward her. She enlarged the ball of light so she’d be clearly seen on the side. She raised a hand to signal for help. The SUV slowed as it approached.

Behind Lucie another vehicle edged closer. Its horn sounded, startling her. A van skidded to a stop at her side, the window lowering. The light in her hand lit up an unfamiliar Rabbit’s face. He was not a part of her Rabbit’s crew, and Lucie guessed he was from the Walled Zone cluster – a hard, unsmiling lot.

“Rabbit sent me to find you when he couldn’t track your phone,” he said. “Get in.”

Lucie extinguished the glowing ball and climbed into the passenger seat. The van’s driver said he’d take her to meet up with Rabbit at the Empire border. Her abandoned car would be delivered back to Matar.

Sebastian sat behind the wheel of the SUV and sighed as the van rolled away. These Rabbits were becoming bothersome. Eventually he’d have to do something about them.

Tune in tomorrow as there’s a bit of a sexy scene… but just a bit… (That post is now available. Click here!)

🎶 Listen to Snowblind by Black Sabbath on YouTube here: https://youtu.be/d90wZYGcifA