It’s day 20 of the #TopsyTurvyBookTour over on Instagram! Yesterday Templeton attended a party, today Emily and Rabbit are on the run in Jurassic Park! Here we go…

(This is a derivative work based on Michael Crichton’s book.)

Emily and Rabbit ran to the right, exiting the corridor through a steel door.

The humidity they found on the other side hit them like a wet wall. The door slammed shut.

“Holy crap.” Emily wiped at her brow. “Rabbit, where are we?”

The two stood at the base of a steep hill. Viny vegetation climbed the rock formations behind them. At their feet: a dark lake, its surface rippled repeatedly by something… large.

“What the hell was that?” Emily yelped, grabbing Rabbit’s arm. The two stilled.

“I’m not sure, but let’s move it. I don’t like the looks of this place.” Rabbit’s nose twitched. He pointed to the ground. “You can barely make it out in the grass, but we’re on a road. It’s grown over, but I can see two sets of indentations.”

They decided to take their chances by heading left, but barely took 10 steps before… Beep-beep! Vroom! They turned to see an old jeep bouncing down the trail toward them. “Do you think we should run?” Emily took a step backward.

“Wait, the driver’s waving his arm. The Fringe wouldn’t be doing that.” The vehicle raced up as they scooted out of the way.

A man in a safari hat slammed on the brakes and the jeep slid to a stop. “Get in!” he ordered.

“MurrraaaAAAWWW!” The sound from the jungle grew closer.

“For the love of Pete, Emily – GET IN!” Jack shouted. A startled Emily launched herself into the jeep, climbing across Jack’s lap to the passenger seat. Rabbit hopped up into the back and held onto the roll bar. Jack shifted noisily and they roared off. 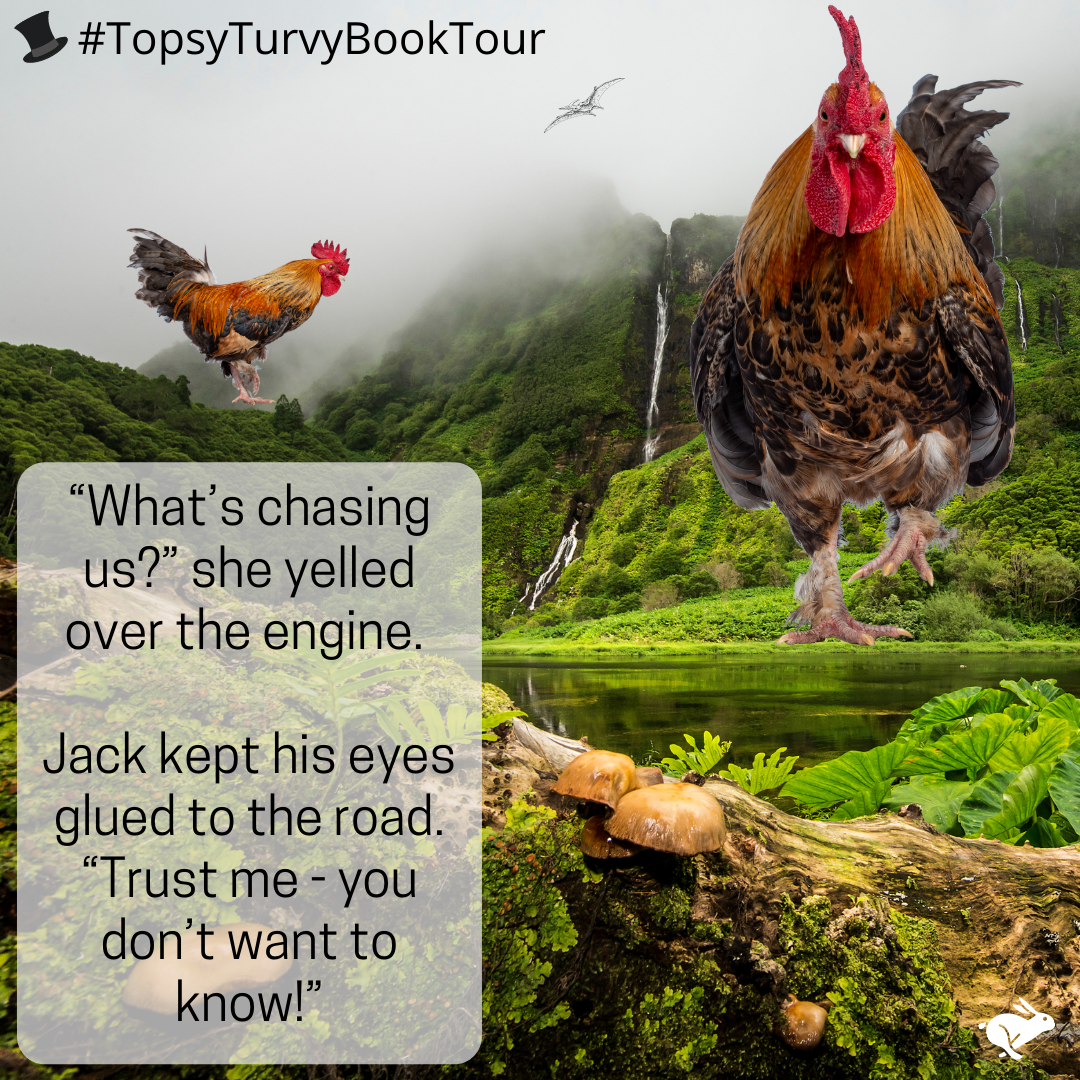 As the jeep careened down the trail, Emily leaned over and peered at Jack’s t-shirt. Black silhouettes of chickens appeared in a red circle. Above it the text read: I raise tiny dinosaurs. “What’s chasing us?” she yelled over the engine.

Jack kept his eyes glued to the road. “Trust me, you don’t want to know!”

…stay tuned as tomorrow Emily and Rabbit hike through an enchanted woods in J. R. R. Tolkien’s The Lord of the Rings! (Now posted!) 🙂

Are you a writer? Please join us! Drop your characters into Jurassic Park and post it on Instagram! Use the hashtag #TopsyTurvyBookTour & tag hosts @saffron.amatti, @elenchase, and @writertracybrown so we can see your characters in Crichton’s work!