It’s day 21 of the #TopsyTurvyTVTour over on Instagram! Yesterday Lucie Bellerose went for a walk and met a mysterious stranger. Today Lucie, Emily Swift, and Tara Parker-Jones are speeding through the dark night. Here we go…

(This is a derivative work based on the TV program Supernatural – episode Safe House.)

“What kind of car is this again?” Emily asked, casting a sideways look at the driver.

“Does Rabbit know you borrowed it?”

“Nope.” Lucie’s foot pressed down on the gas pedal. “And he’s not going to say anything.” 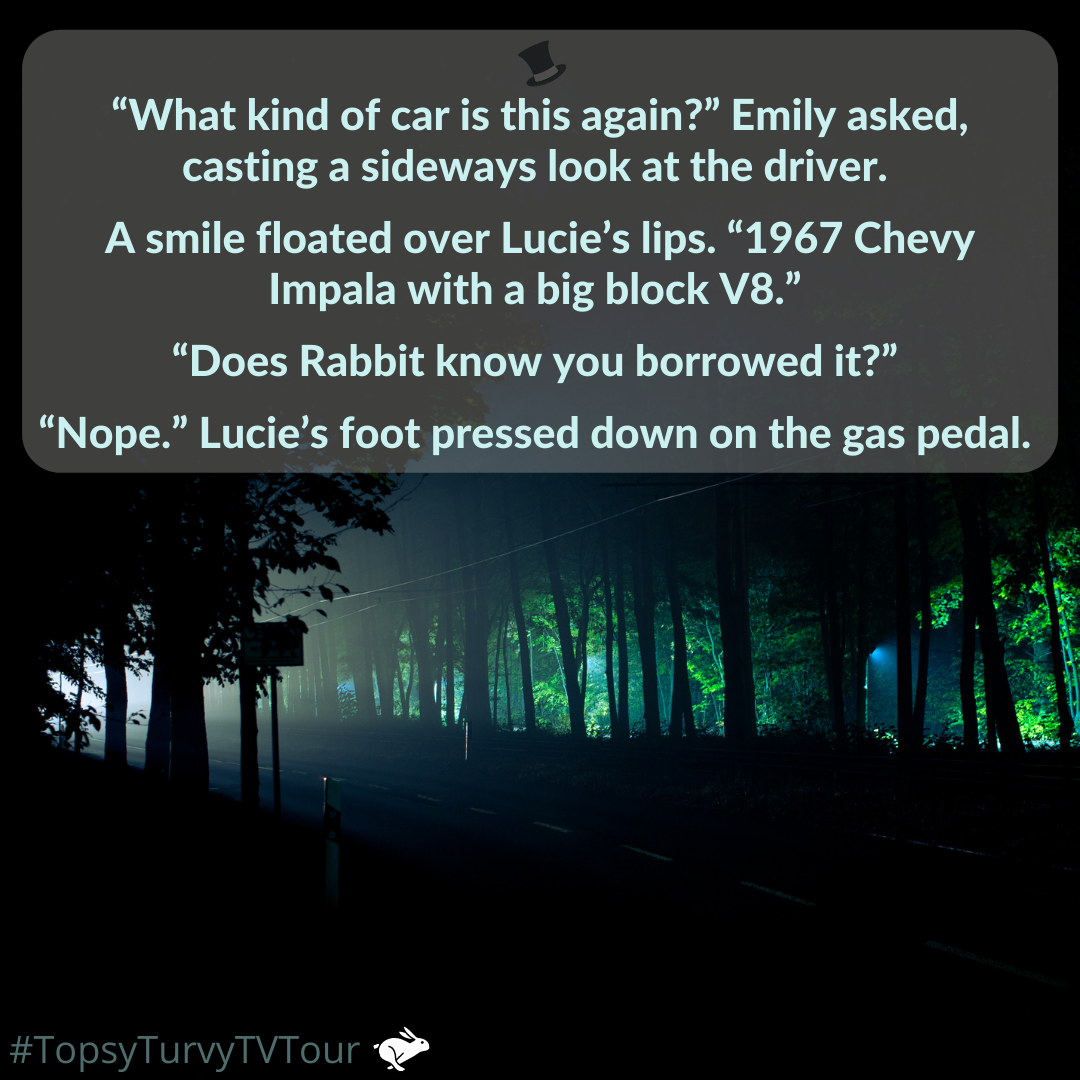 “Why?” Emily stared out into the dark ahead of them. Lucie was driving a tad too fast for her liking.

“Because he owns something that hasn’t been converted to electric. The network would give him grief.”

“This is way sexier,” Tara said, popping up in the back seat. “It would be neutered if they converted it.”

“Last pit stop,” Tara replied. She leaned forward and peered down the road. “Where are we heading?”

Lucie’s eyes flicked up to the review mirror. “Well, there’s this mystery.”

“I’m in!” Tara bounced in her seat. “Hey, what’s on the floor?” She pulled out her phone and pulled up the flashlight app. “Huh, a bottle of Johnny Walker Blue.”

“Not mine,” said Lucie, palming the steering wheel. “Must be Rabbit’s. Anyhow, the place is in Grand Rapids. We’re checking out a house where a little girl was found unconscious. She’s still in a coma. They found a weird handprint on her ankle. We’re going to investigate the house to see what we can find out.”

Tara frowned. “Um, that’s above my pay grade. Why are we doing this?”

Emily waved a stack of paper at her. “It’s in the script.”

The three women were silent. The car slowed, eventually rolling to a stop in the middle of the road.

Lucie turned in her seat. “You know, there’s this party back in Matar at a bar called Down Under. The band tonight is incredible. Maybe we should go there instead?”

“I’m for it.” Emily tossed the script into the back seat.

“Then it’s settled.” Lucie slammed the gas as she cranked the wheel. The car spun to its right, fishtailed, and whipped around facing the other direction. Lucie grinned. “Let’s see what Rabbit’s ‘Baby’ can do.”