It’s day 22 of the #TopsyTurvyBookTour over on Instagram! Yesterday Emily and Rabbit came face to face with Nisha in a Lord of the Rings derivative. Today Emily and Rabbit divert from the trail and take their chances by following a narrow footpath. Here we go…

(This is a derivative work based on Stephenie Meyer’s book, Twilight.)

Emily and Rabbit picked their way through the underbrush leaving Nisha behind.

At least, they hoped she stayed behind. Neither wanted to face the otherworldly creature again. The narrow footpath widened and finally they were able to walk side by side.

As the shadows lengthened, it was clear they wouldn’t be exiting the woods before it was fully dark. Rabbit suggested they make camp.

Rabbit opened his mouth to answer, but the snapping of a twig deep in the dusk made both friends freeze. Rabbit put his finger to his lips, stepping in the direction of the noise. Another snap. Emily put her hand to her chest and peered past him into the mass of leaves.

“Probably just an animal.” Rabbit wiped the back of his hand across his mouth.
“That’s what worries me,” Emily answered. Hearing nothing more, the two turned –and faced a tall, silent man, with honey-blond hair and eyes the color of golden amber. Caught off guard, Emily stumbled backward crying out. The man’s eyes tracked her movements. He remained unsmiling. 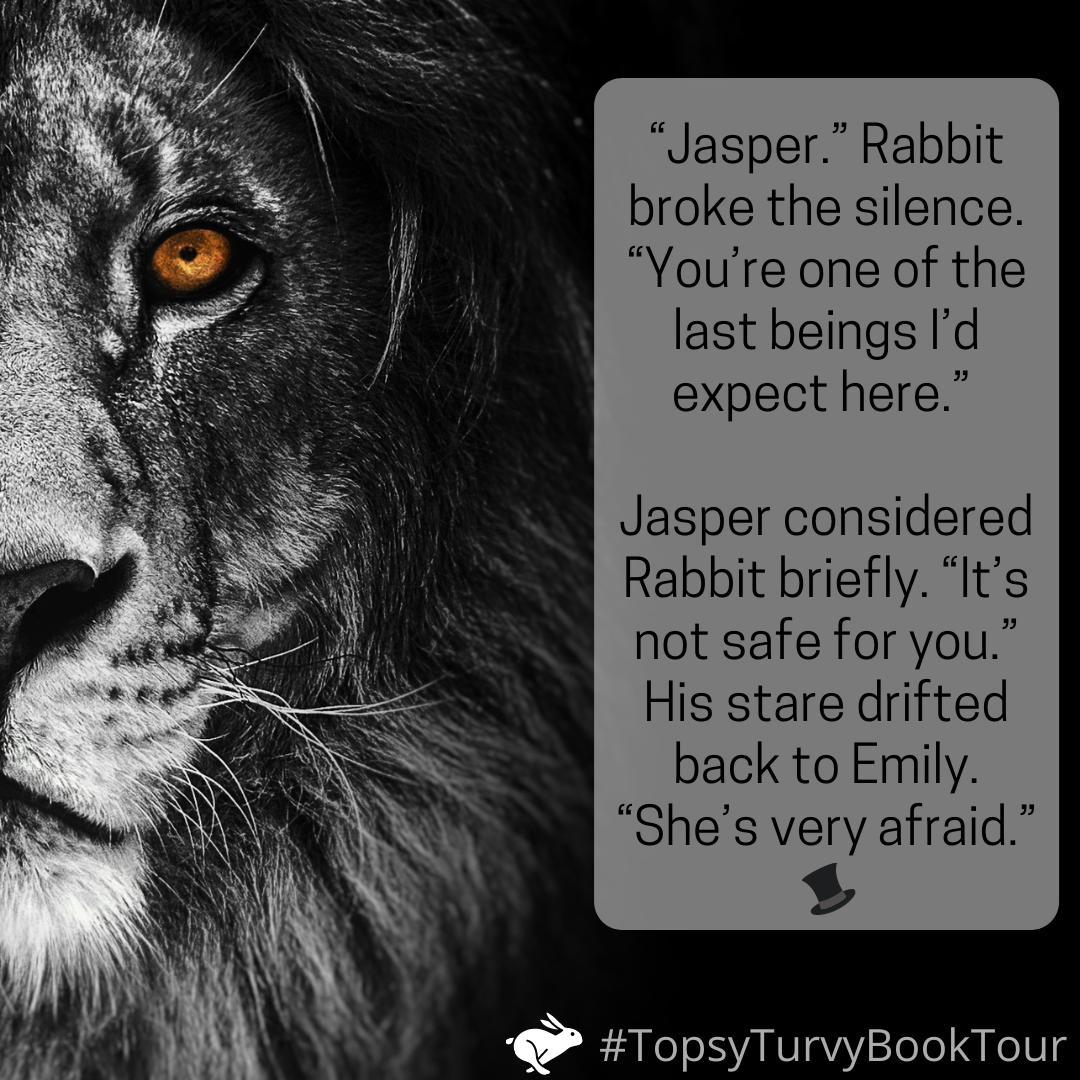 Jasper considered Rabbit briefly. “It’s not safe for you.” His stare drifted back to Emily. “She’s very afraid.”

“Can you help us?” Rabbit concentrated on his breathing. He needed to slow his heartbeat.

“Yes. This way.” Jasper turned, pushing a sapling aside. Rabbit nodded to Emily and they followed the lean man into the brush.

“What is he?” she whispered.

A sharp intake of breath produced a whistle in Emily’s throat. “I thought there weren’t any vampires in the Empire?”

“We’re not in the Empire,” Rabbit replied.

Jasper abruptly stopped. He motioned past the clearing’s edge. “We are here.”

“Where is here?” Emily pulled up the courage to speak to the vampire.

…stay tuned as tomorrow I’m blending a little bit of Stephenie Meyer’s Twilight with George Orwell’s 1984. (You can now read that post here.) 🙂

Are you a writer? Please join us! Drop your characters into Twilight and post it on Instagram! Use the hashtag #TopsyTurvyBookTour & tag hosts @saffron.amatti, @elenchase, and @writertracybrown so we can see your characters in Meyer’s work!