It’s day 23 of the #RockTheTurvy writing challenge over on Instagram! Yesterday we popped in on the crew during a post-party cleanup. Today characters are off to the zoo. Who does Rabbit see?

To the tune of: You Really Got Me, by The Kinks.

“It’s more of a rescue sanctuary, so I’m okay with it,” Rabbit explained as they passed through the gate. “Otherwise, I’m not about the zoo.”

“I think he hit his maximum level of tolerance after the house party at Emily’s,” he replied.

“But he hates losing,” Rabbit said.

“She picked up on his tell,” Tara added.

“Which is?” Lucie asked.

The four friends strolled the grounds, enjoying the sunshine and a rare peek into the addax preserve. 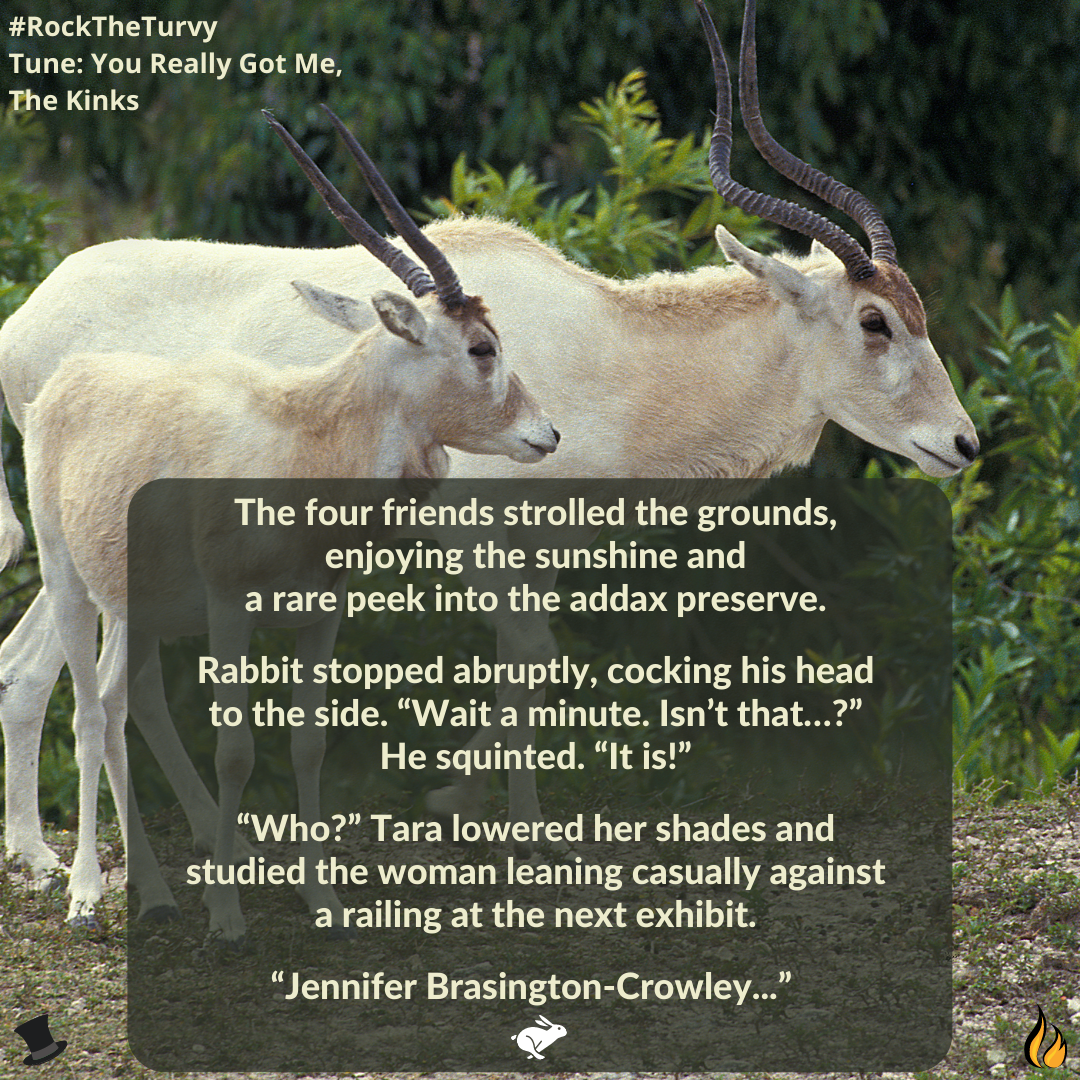 Rabbit stopped abruptly, cocking his head to the side. “Wait a minute. Isn’t that…?” He squinted. “It is!”

“Who?” Tara lowered her shades and studied the woman leaning casually against a railing at the next exhibit.

“Jennifer Brasington-Crowley. She wrote that great Raven Xerces series: BirdSong, Raven Song, and Hell’s Bells.” Rabbit ran his palms down the front of his concert tee, brushing away imaginary wrinkles. His eyes glittered and grew darker. His nose twitched.

Emily nudged him. “Go say hi. Tell her you liked her books.”

“Good grief.” Tara grabbed his arm and dragged him toward the author.

“I like her outfit,” Lucie noted. “What’s her shirt say? Oh! That’s bold.” She laughed.

Lucie and Emily watched as Tara introduced the woman to Rabbit –and then beat feet back to the others.

“He’s so cute. Nearly passed out when she touched his arm,” Tara reported. “I saw quivering.”

Emily raised her eyebrows. “So where to after this?”

Lucie pulled the itinerary from her purse. “It says: next stop, the library, Congress of Empire Witches. Now how is Brown going to pull this off?”

“Excuse me, ladies,” Big Rabbit interrupted from behind a vendor cart full of animal plush toys. “When you’re ready to go, I’ll be driving you.”

Tune in tomorrow as characters play a game in the Congress of Empire Witches. Who else is stalking the stacks? (Oooo… find out here!)

🎶 Listen to You Really Got Me by The Kinks on YouTube here: https://youtu.be/fTTsY-oz6Go