It’s day 24 of the #TopsyTurvyBookTour over on Instagram! Yesterday Emily told the Party to stuff it. Today Emily, Rabbit, and Tara are on a ship – and they’re in a lot of danger. Here we go…

(This is a derivative work based on Herman Melville’s novel, Moby Dick.)

Emily woke when the bed she slept upon skidded across the floor and slammed into the opposite wall.

Startled, she climbed to her knees and held onto the headboard as the room tipped and sent the bed back the way it came. The creaking in the walls around her was drowned out by shouts beyond the bedroom door.

As the bed began to move again, Emily jumped off. Snagging her sneakers as they tumbled across the floor, Emily bounced from foot to foot as she pulled them on. What was going on?

The bedroom door led into a narrow hall with a ladder at the end leading up to a noisy outside. The yelling was coming from above. Emily scampered up the ladder, the humid scent of salt, sweat, and fish filling her nostrils.

At the top, Emily swung her head side-to-side, eyes wide as she watched the ship’s crew scurrying back and forth as they shouted orders at one another. The ship pitched upward, and cold water crashed over the side sending a river across the deck.

Holding her breath, Emily gripped the last rung of the ladder and cringed as the seawater swept over her body. She sputtered and blinked rapidly as someone lifted her off her perch.

“It’s a storm!” A soaked Rabbit shouted over the wind, pulling her toward the center of the ship. “We’re stuck here!”

“Who is with us?” Emily called back.

Rabbit didn’t answer but pointed toward the bow. She looked closer. A crew of Rabbits worked frantically in the storm. In the mix, Tara floundered across the slick deck, her fair hair plastered to her forehead. She regained her balance, grinning. 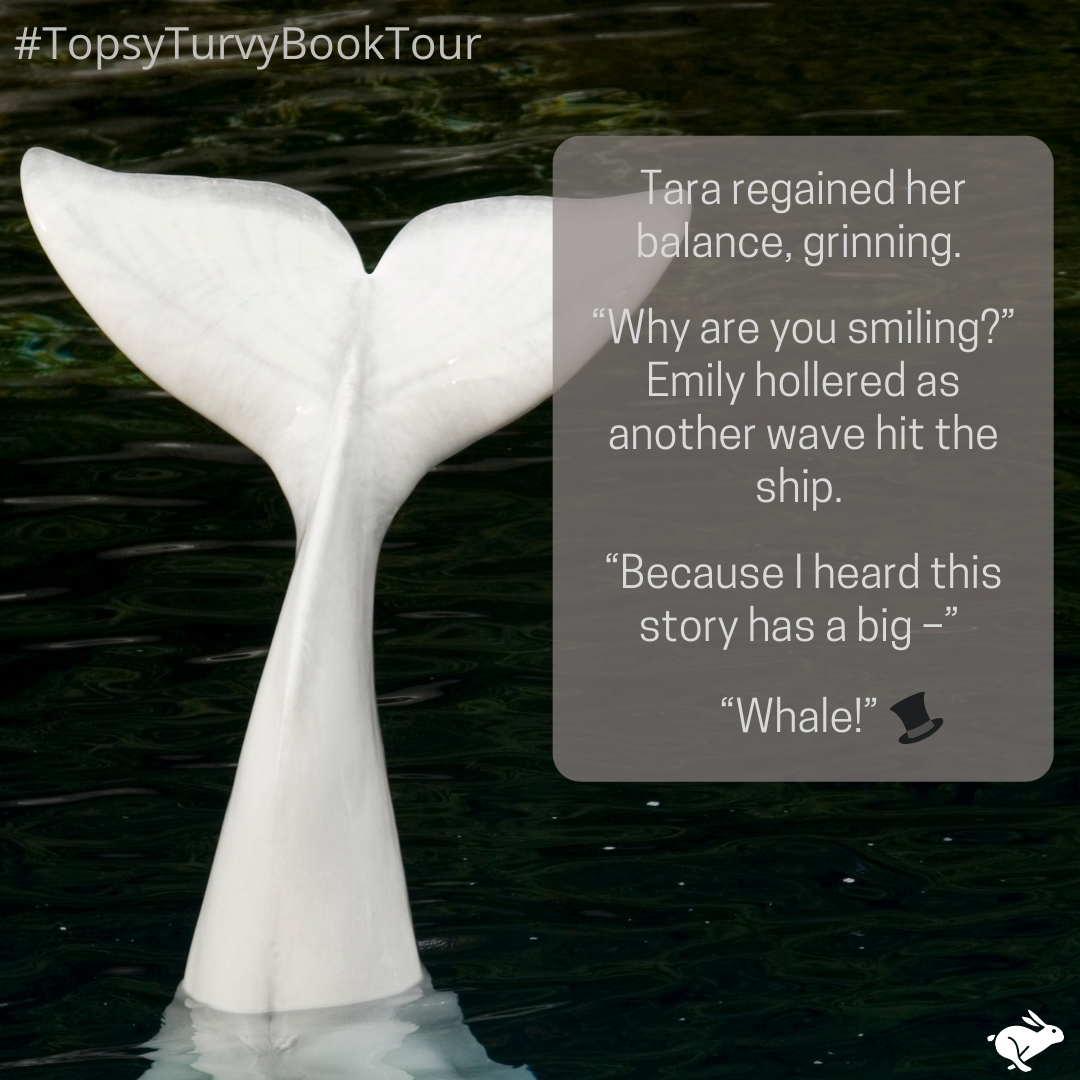 “Why are you smiling?” Emily hollered as another wave hit the ship.

“Because I heard this story has a big –”

“Whale!” Rabbit gripped Tara’s wrist and pulled her close. He latched onto Emily’s arm and yanked her into his embrace in a futile attempt to shield his friends. Emily managed to lift her head as the gust of wind rushed past them, casting her eyes to the wild sky. Above them waved a big, white tail…

Are you a writer? Please join us! Drop your characters into Moby Dick and post it on Instagram! Use the hashtag #TopsyTurvyBookTour & tag hosts @saffron.amatti, @elenchase, and @writertracybrown so we can see your characters in Melville’s work!