It’s day 27 of the #TopsyTurvyBookTour over on Instagram! Yesterday Door to Door characters enjoyed Christmas dinner at Anne’s Lace’s apartment while they discussed the Word Charmers of Instagram. Today everyone ignores the ghost at the window while Emily and Templeton plan to door travel. Here we go…

(This is a derivative work based on Emily Brontë’s Wuthering heights.)

After dinner, the group retired to the living room.

Anne drew the curtains shut when an agitated ghost peered in from the other side of the window.

“Is that the Ghost of Christmas past?” Tara asked.

“No,” Anne replied. “That’s Catherine. She needs closure, but we don’t have time to help with that.” 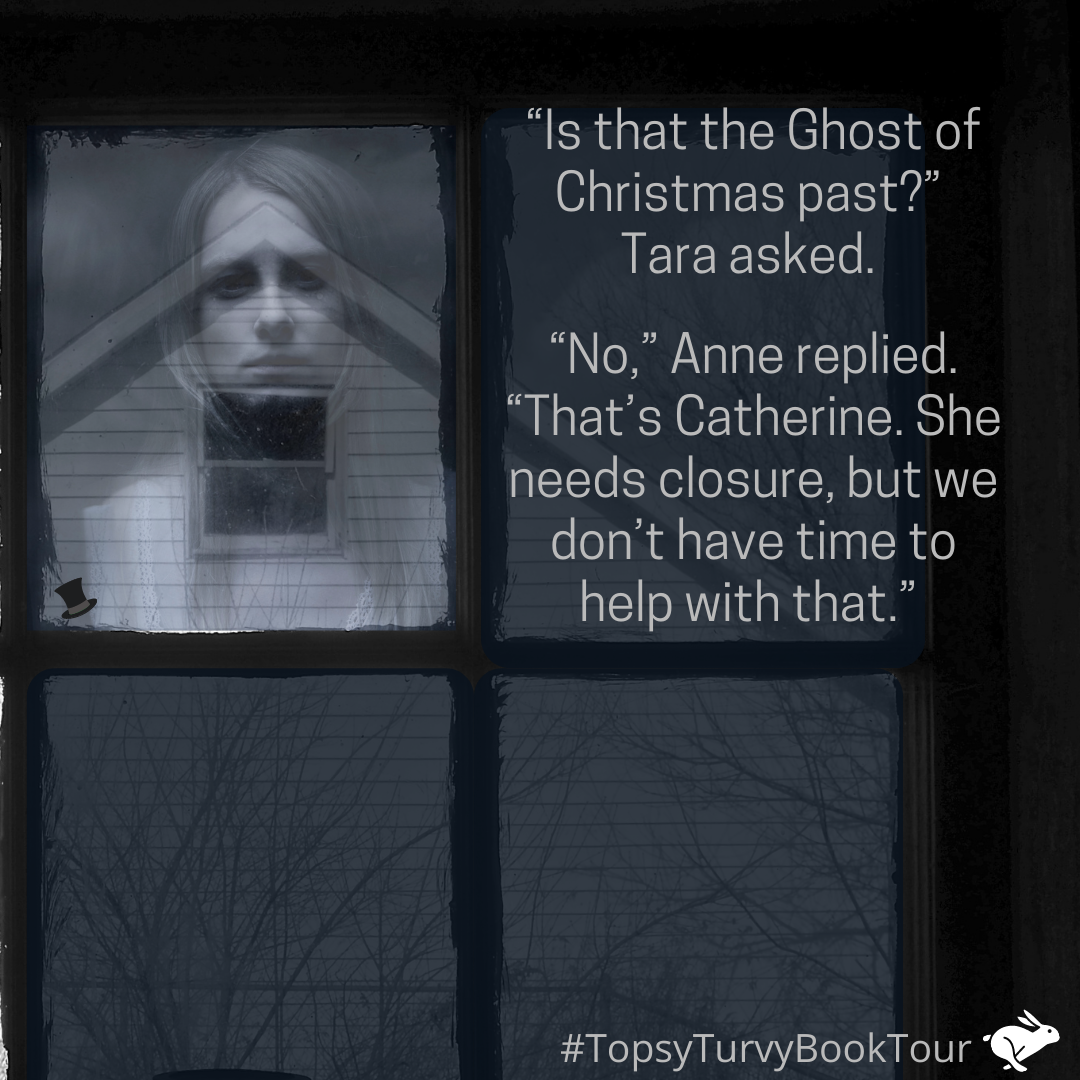 “Maybe next time,” Emily agreed. “Okay, Rabbit. Tell us everything about Instagram so we can put a stop to this Topsy Turvy spell.”

“The network reports Instagram is a land filled with Word Charmers, Vision Benders, and Melody Makers. It was founded by the Systromyans, devotees of The Aesthetic,” Rabbit explained.

“I don’t know what any of that is,” Emily admitted. “Are they dangerous?”

“They can be like any other being. But they’re not evil. It seems their magic leaked out of Instagram and well…” Rabbit lifted his palms. “Here we are.”

“Has the network determined a way in?” Templeton asked.

“I have coordinates.” Rabbit wrote on a piece of paper and showed his friends.

“That’s not quite true.” Rabbit inclined his head toward Templeton.

“Seriously?” Emily sunk back into the couch. “Figures.”

The Salesman removed a piece of lint from his sleeve. “You could spend some more time studying.”

Templeton closed his eyes, rubbing the spot between his eyebrows with an index finger. Finally, he opened them and turned to Emily. “Reconnaissance only. None of your jump-first-think-later shows.”

“Since when do I –” Emily’s protest stopped when she detected a hum. The door to the kitchen began vibrating with door travel energy. “Do you hear that?”

For the second time in a month, Templeton’s smile reminded Emily of the Cheshire Cat. He strolled past and was through the door in a flash. Grumbling, Emily followed, placing her top hat on her head before door traveling to the land called Instagram.

We’ll pick back up tomorrow with Anne Lace, Tara Parker-Jones, and Lucie Bellerose witching up some magic in the kitchen in a derivative of Shakespeare’s MacBeth! (Now posted here!) 🙂

Are you a writer? Please join us! Drop your characters into Wuthering Heights and post it on Instagram! Use the hashtag #TopsyTurvyBookTour & tag hosts @saffron.amatti, @elenchase, and @writertracybrown so we can see your characters in Emily Brontë’s work!