It’s day 28 of the #RockTheTurvy writing challenge over on Instagram! Yesterday Emily Swift handed off the role of main character to Lucie Bellerose. Today author T.L. Brown has a mysterious conversation…

To the tune of: Burden in My Hand, by Soundgarden.

T.L. Brown stood brewing coffee in her kitchen. It’d been a long month but the #RockTheTurvy went well. The D2D road trippers admitted they had a good time. Well, everyone except Templeton. Although, he did seem to enjoy pushing Emily off a bridge.

She heard the door leading to the basement open, and looking over her shoulder, found a glowering Salesman. He shut the door behind him, leaning his back against it and crossing his arms. 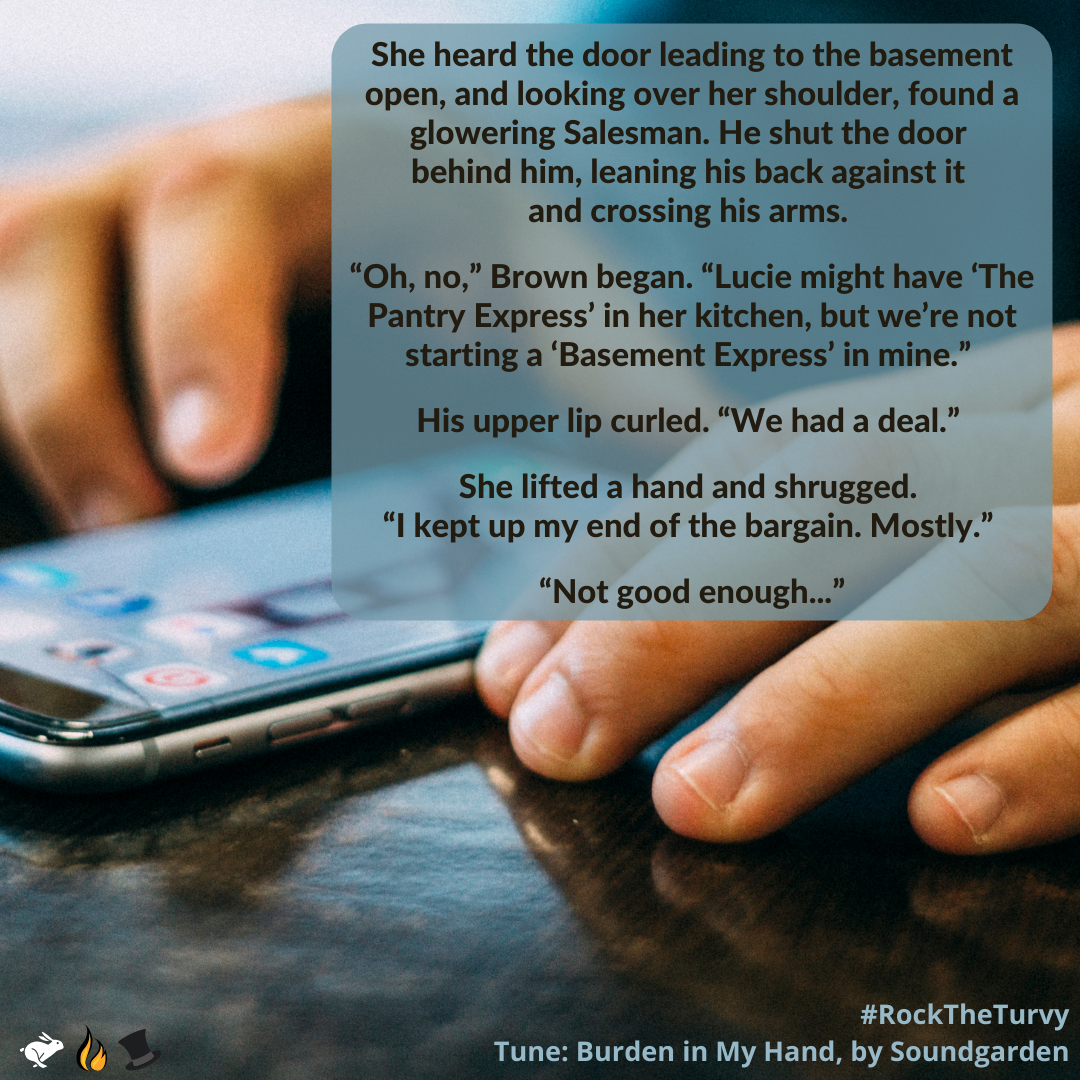 “Oh, no,” Brown began. “Lucie might have ‘The Pantry Express’ in her kitchen, but we’re not starting a ‘Basement Express’ in mine.”

His upper lip curled. “We had a deal.”

She lifted a hand and shrugged. “I kept up my end of the bargain. Mostly.”

“Not good enough.” He pushed off the door and crossed the room, stopping on the other side of the counter.

Brown poured milk into her coffee. “I tested scenarios out on Instagram. Depending on how readers reacted, well, that influenced some passages in Lucie’s upcoming book.”

The man snorted. Brown’s phone chose that moment to buzz. Two sets of eyes cut to it. He was faster, swiping the phone off the counter. “No password protection?” he tsked.

Brown rounded the corner. “Hand it over.”

The Salesman scrolled through the Instagram messages. “And here are @brasingtonbooks, @saffron.amatti, and @jodimay15. Just what ‘influential’ comments did they make?”

“Now.” Brown thrust her hand at him. She watched his eyes darting back and forth.

“What else is on your phone? Hmm. Interesting Pinterest boards.” He pursed his lips, his eyes flicking up once before returning to the screen.

“Alright, we’re done.” Brown snatched the phone away and pointed to the basement door. “Back to the Empire.”

The man tossed one last dark look down his nose before turning and door traveling out of her home.

Brown sunk into a kitchen chair, blowing out a breath. “He’s in for a big surprise.”

I hope you’ve enjoyed the #RockTheTurvy challenge! Want to start at the beginning? Head back to Day 1 here!

🎶 Listen to Burden in My Hand by Soundgarden on YouTube here: https://youtu.be/XmIqIVxUuKs