It’s day 29 of the #TopsyTurvyBookTour over on Instagram! Yesterday Tara, Anne, and Lucie cast a little magic to help keep Emily safe in Instagram. Today Emily and Templeton board the Orient Express. Here we go…

(This is a derivative work based on Agatha Christie’s Murder on the Orient Express.)

In the land of Instagram, Templeton and Emily regrouped.

Templeton cocked his head to the side and studied the bubble hovering two feet over Emily’s head as she walked.

“How long have you had that?” He motioned to the bubble.

Emily looked up. “Had what?”

“Never mind.” Templeton waved off the subject. “I have what I need. You?”

“I think so,” Emily said. “I talked to a few Word Charmers. The spell has a time-limit. It’s going to end shortly.”

“In three books after this one,” Templeton replied. “Turns out the last one is a Wildcard pick. We’ll work a little magic and change the book to our advantage. I know which Word Charmer to target.”

Emily pointed to a train waiting at the station. “Let’s get back to Anne’s and make a plan. This is traveling from Istanbul to Kincaid.”

“Only if it can fly across the Atlantic or the Bering Strait,” Templeton observed, but he followed Emily.

“Here. A Word Charmer named Brook Peterson gave me these. We have rooms in a sleeping car.” She handed Templeton a ticket.

Templeton pocketed his. “I have a feeling we’ll be jolted awake soon enough.”

He was right. Emily hadn’t shut her eyes for more than a minute when a shout sounded through the train car. She jumped up and peeked out her door. Other heads popped out through theirs and someone called for the conductor. He appeared, banging on the door for a Mr. Ratchett. At the same time, the door to Templeton’s room slid open and an attractive woman in a red kimono slipped out. Emily’s mouth dropped open. 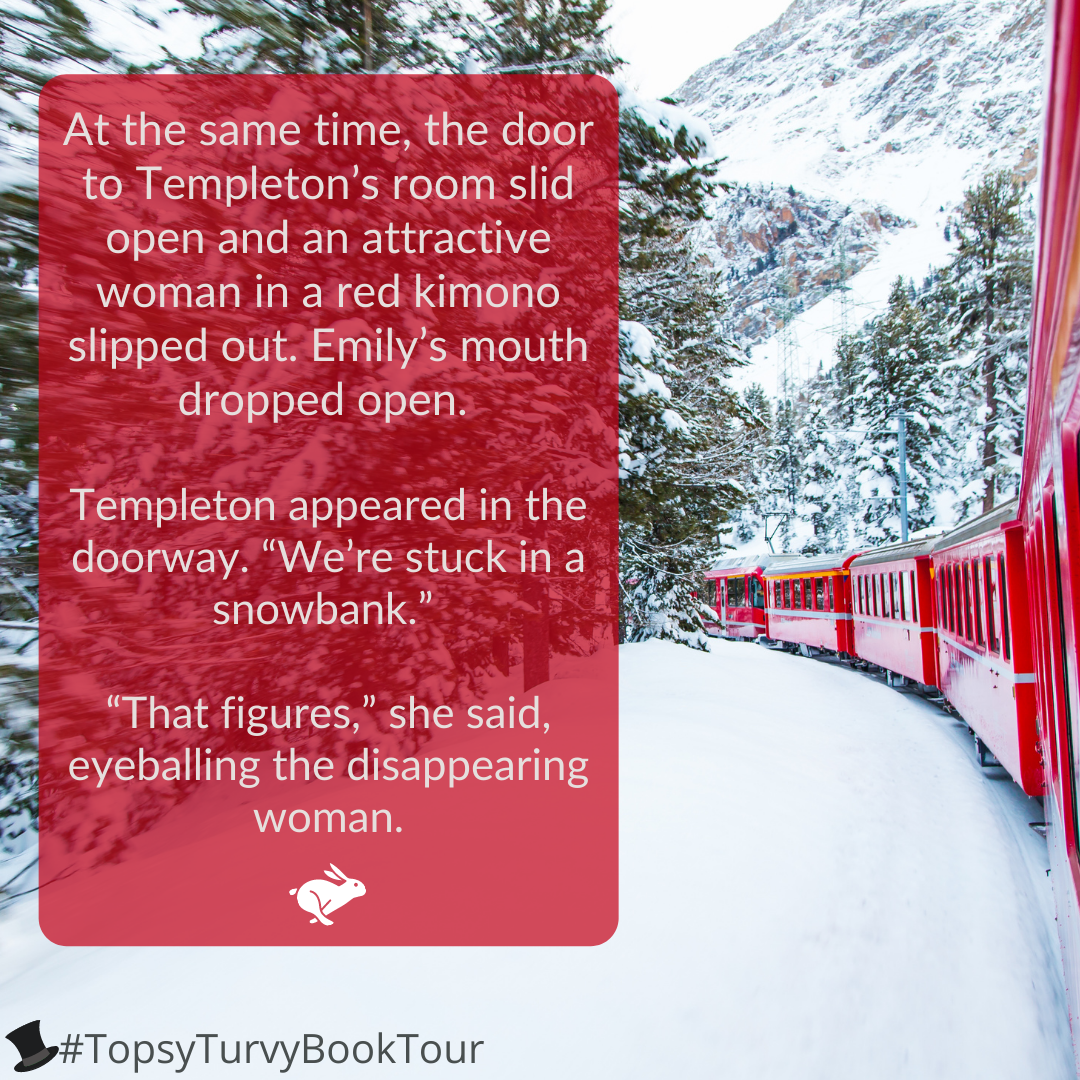 Templeton appeared in the doorway. “We’re stuck in a snowbank.”

“That figures,” she said, eyeballing the disappearing woman. “Have you figured out which book?”

“Hmm.” Templeton tapped a long finger on his chin. “I had fun in the earlier Agatha Christie book. I’m tempted to stay.”

…stay tuned as tomorrow the Door to Door gang reunites – but what terror do they face in a garden maze? (That post is now published! Click here!) 🙂

Are you a writer? Please join us! Drop your characters into Murder on the Orient Express and post it on Instagram! Use the hashtag #TopsyTurvyBookTour & tag hosts @saffron.amatti, @elenchase, and @writertracybrown so we can see your characters in Agatha Christie’s work!