It’s day 3 of the #TopsyTurvyBookTour over on Instagram! Yesterday Emily, Rabbit, and Templeton experienced a slice of Jane Austen’s Pride and Prejudice. Today I’m putting my Door to Door characters into Harry Potter and the Prisoner of Azkaban. Here we go…

(This is a derivative work based on the original book by J.K. Rowling.)

The inside of the spacious manor home seemed too dark.

Emily thought about door travel, but she wouldn’t leave Rabbit behind. She cast a sideways glance at Templeton. He’d probably take off if he could.

“Someone’s magic is suppressing door travel,” Templeton noted. He leaned past Emily and pushed the door open. Emily stepped through.

Rabbit moved to her side. “Stay close.”

The floor shifted, causing them to stumble to the left. Templeton gripped Emily by the upper arm and kept her on her feet. The space flashed black before the scene around them swirled into a dark stairwell. On the walls, torches lit the way.

“I don’t think we’re in Jane Austen’s world anymore,” Emily whispered. She watched as a figure stepped forward, peering out at her from the center of a picture frame.

The portrait studying Emily and crew put a finger to her lips. She gestured toward the right of her painting as a door silently swung open. The portrait smiled and nodded, pointing to the right again.

“I think she wants us to go inside,” Emily said.

The trio entered a room devoid of furniture except for a lone table. Flames from a fireplace lit the space. Templeton picked up a blank piece of parchment from the table. Frowning, he examined both sides.

Rabbit’s head bowed as he texted. “I’m still trying to figure out what’s going on. The network’s checking on something called Instagram.”

“I think I know where we are,” Emily grinned. A wand leaning in the room’s corner caught her eye. She brought it to the table. “We’re at Hogwarts.” 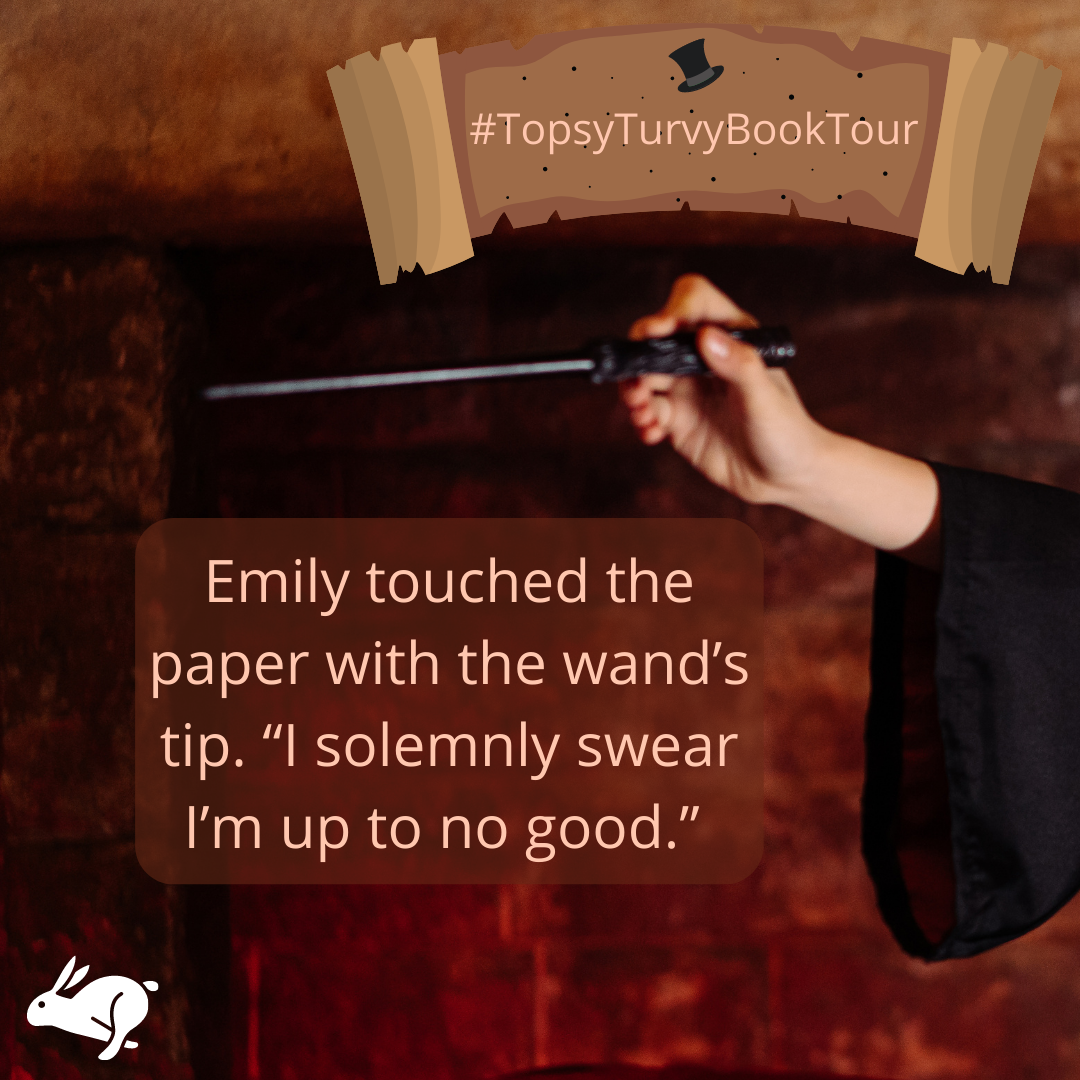 Emily touched the paper with the wand’s tip. “I solemnly swear I’m up to no good.”

Templeton’s surprise was evident as the words The Marauder’s Map appeared, followed by a map filled with tiny moving dots. Three dots stood close together labeled Emily, Rabbit, and Templeton.

“This is helpful,” Rabbit’s black eyes glittered. “But let’s go. Those dots moving toward us –they’re marked as the Fringe!”

…stay tuned as tomorrow Door to Door characters will be dropped into Oscar Wilde’s The Picture of Dorian Gray. (Now posted here!) 😀

Are you a writer? Please join us! Drop your characters into a Harry Potter book and post the story on Instagram! Use the hashtag #TopsyTurvyBookTour & tag hosts @saffron.amatti, @elenchase, and @writertracybrown so we can see your characters in J.K. Rowling’s book!