It’s day 3 of the #TopsyTurvyTVTour over on Instagram! Yesterday Emily Swift and Tara Parker-Jones joined the best of British TV. Today Tara and Lucie Bellerose drop a few wisecracks in an episode of Law & Order. Here we go…

(This is a derivative work based on the TV show Law & Order – episode Mr. Bones.)

(Note: I loved the original series. The sharp dialogue between Det. Lennie Briscoe and Det. Mike Logan was tight. A lot of their humor was dark, so I lightened it up a bit here…)

“What I want to know is why you took the remains out of the ground before you called us.” Tara Parker-Jones (a/k/a Det. Briscoe) sauntered through the site, navigating the network of narrow paths and freshly dug earth.

“We’re archaeologists, that’s what we do,” answered the man in charge of the dig.

“Hey, this is a crime scene, buddy. We don’t appreciate your little red ribbons,” admonished Tara before crossing to the ‘body.’ A skeleton grinned up at her from the dirt.

“We didn’t know these remains were contemporary!” The archeologist protested.

“The Rolex didn’t give it away?” sneered Lucie Bellerose, a/k/a Det. Logan. She’d squatted by the victim. When she rose, she didn’t bother to make sure the camera caught her good side. Every side was a good side. (Note: So I had a crush on Chris Noth… 😉)

The three stood around the bones at their feet. The medical examiner returned, crouching over the victim.

“What’s this?” Lucie gestured toward a scrap of molded fabric. “From a Witch, Salesman, or Rabbit?”

“Appears to be what’s left of a finely made top hat, so Salesman,” answered the M.E. “Looks like it belonged to the corpse.”

“Got lost on his way to a party?” Tara deadpanned.

“What else we got?” Lucie motioned to the crushed rib cage. “What’s the gold I’m seeing?”

“Buttons – must’ve been wearing a jacket.” He bagged one and handed it up to the detectives. 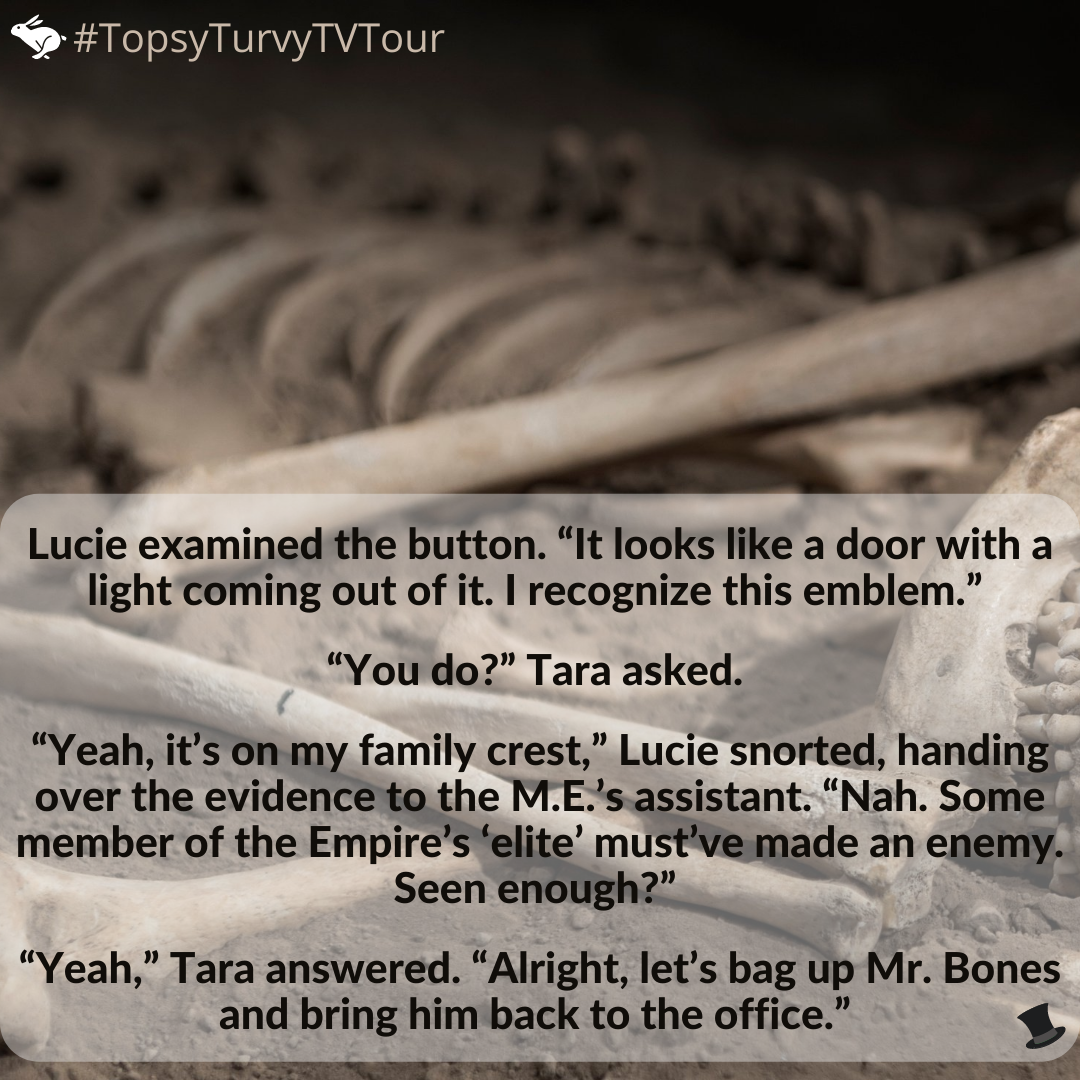 Lucie examined the button. “It looks like a door with a light coming out of it. I recognize this emblem.”

“Yeah, it’s on my family crest,” Lucie snorted, handing over the evidence to the M.E.’s assistant. “Nah. Some member of the Empire’s ‘elite’ must’ve made an enemy. Seen enough?”

“Yeah,” Tara answered. “Alright, let’s bag up Mr. Bones and bring him back to the office.”

… Tune in tomorrow as the Door to Door Magic Mystery Machine rolls up to the curb in an episode of Scooby Doo! (Now posted! Click here!)