It’s day 30 of the #TopsyTurvyBookTour over on Instagram! Yesterday Emily and Templeton traveled on – and off – the Orient Express. Today we’re reuniting our fearless gang in a dangerous hedge maze next to one infamous hotel. Here we go…

(This is a derivative work based on Stephen King’s The Shining.)

Emily and Templeton door traveled off the train, but instead of Anne’s apartment, they stepped through a shed door into the center of a vast hedge maze.

Tall shrubbery surrounded them. Templeton gestured to the left. The two walked the narrow path quietly, twisting and turning through the labyrinth. Occasionally they passed a big topiary shaped into an animal wearing a top hat.

“I don’t like this,” Emily said as she skirted a dark green lion.

“Shh!” Templeton raised a hand. Emily heard it too. Something was running through the maze. Before they could react, they heard Rabbit yell, ‘this way!’ He and the others rounded the corner, racing toward them.

“Run! Fringe!” Rabbit shouted. Two animal topiaries chased after them. Emily and Templeton turned and fled. At the end of a row, Jack sprang into view.

“Follow me!” He led everyone out of the maze, sprinting toward the front of a massive hotel. “In here. We’ll be safe.” 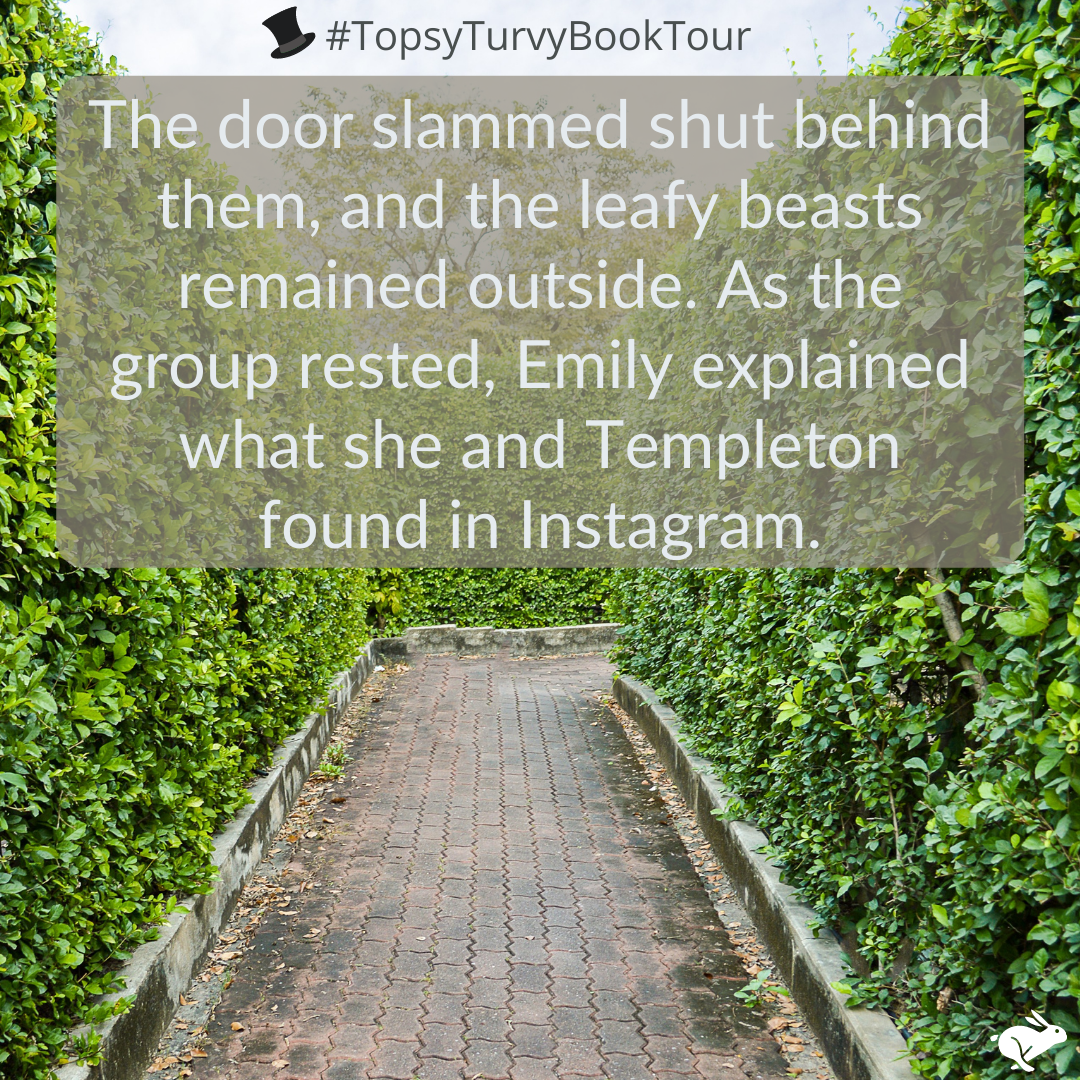 The door slammed shut behind them, and the leafy beasts remained outside. As the group rested, Emily explained what she and Templeton found in Instagram.

“There are 18 Word Charmers. Two work as a team. Templeton determined exactly which one’s been messing with us,” she finished.

“We turn the tables.” Templeton held up a journal. “T.L. Brown’s. It’s been spelled. We’re going to choose a different book and write a new Day 31.”

“Oh, no,” Templeton replied. “This will be my pleasure.” He picked up a pencil from the check-in desk and erased the Word Charmer’s planned post. He began to write.

“You know,” Jack said, looking around, “this might be a nice place to stay. I’m thinking about quitting teaching and writing a book.”

Everyone turned and stared. Even Templeton looked up from his task.

…stay tuned as tomorrow the Door to Door gang takes control of the Topsy Turvy spell in one final post! (That final post is now available. Click here!) 🙂

Are you a writer? Please join us! Drop your characters into The Shining and post it on Instagram! Use the hashtag #TopsyTurvyBookTour & tag hosts @saffron.amatti, @elenchase, and @writertracybrown so we can see your characters in Stephen King’s work!