It’s day 30 of the #TopsyTurvyTVTour over on Instagram! Yesterday Emily Swift, Tara Parker-Jones, and Lucy Bellerose blew off the Topsy Turvy. Today there is something glowing in the park woods. What is it? Who shows up to investigate? Here we go…

(This is a derivative work based on the TV program The Simpsons – episode The Springfield Files.)

“Seriously? Two-dimensional again?” Emily studied her hand. “I hate this.”

“But guess who’s in this episode?” Tara paged through the script. “Fox Mulder!”

“He’s not real. He’s a character on a TV show.” Emily paused when Tara raised her eyebrow and gave her a pointed look. “Oh. Right.”

“Come on, let’s go.” Tara led Emily outside and into the park across the street. The sun had set, and she guided them with her flashlight. “Shooting takes place in this stand of trees… Whoa!”

The beam from Tara’s flashlight slid along the edge of the small woods. A shimmering glow weaved back and forth through the trees. A whisper floated across the breeze. “I bring you… peace and love.”

Emily grabbed Tara’s arm. “What the hell is that?” 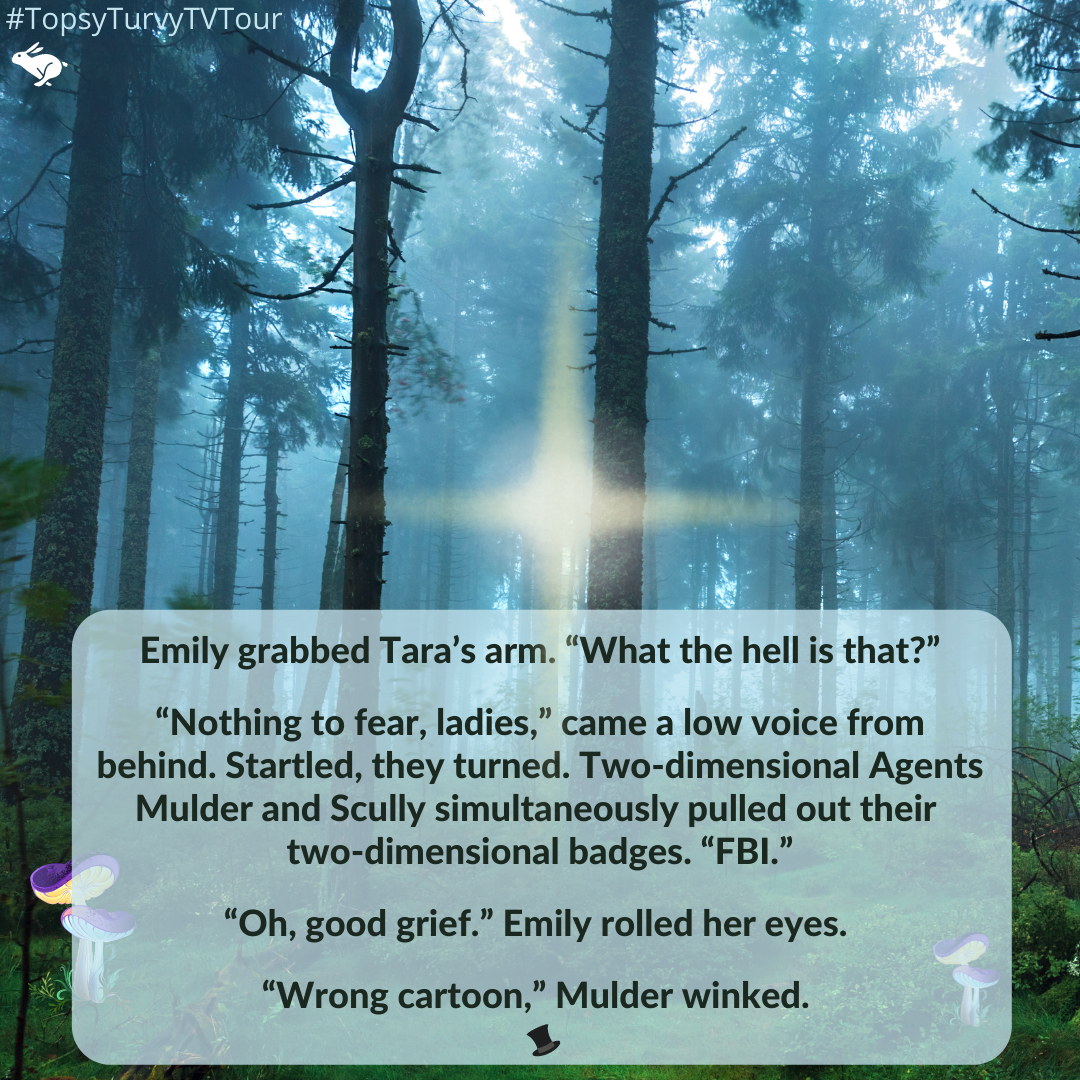 “Nothing to fear, ladies,” came a low voice from behind. Startled, they turned. Two-dimensional Agents Mulder and Scully simultaneously pulled out their two-dimensional badges. “FBI.”

“Mulder, if you’re done here, let’s figure out who this ‘alien’ is so we can return to our three-dimensional selves.” Scully gave a long-suffering sigh.

“Peace and love!” called the glimmer being.

“I’ve got this one.” Rabbit pushed by the group. He strolled into the line of trees and reached into the swaying light. He led the shiny creature out of the woods and toward the group. As they approached, Emily recognized Templeton.

He smiled when he saw her. “Peace and love, Emily!”

Horrified, Emily turned to Rabbit. “What nightmare is this?”

“He’s been ticking Lucie off, so she gave him bioluminescent magic mushroom tea.” Rabbit eyeballed Templeton. “He’ll be fine. Annoying, but fine.”

“Well, I’ve had about enough of being a cartoon.” Emily squinted as she looked beyond the treeline. She pointed to the city lights. “Hey, I think I can see Kincaid from here. I’m going to head home. I told Jack we’d go to a corn maze tomorrow. I’ll see you all later.”

… Tomorrow is the last day of the Topsy Turvy TV Tour! Tune in as Emily wanders into a corn maze. What danger – and salvation – awaits her? (That post is now available. Click here!)