It’s day 31 of the #TopsyTurvyTVTour over on Instagram! (And the last day!) Yesterday Emily Swift and Tara Parker-Jones found something glowing in the park woods. Today Emily is running for her life in a corn maze. What happens? Here we go…

(This is a derivative work based on the TV program Chilling Adventures of Sabrina – episode October Country.)

–
Emily paused at the entrance of the corn maze. Jack promised to catch up. She chose a path and began to stroll. The fall day had grown cold.

Disappearing deeper into the maze, Emily followed a long row ending at a scarecrow. It was perched high off the ground, its arms stretched wide.

She swallowed. “Right. That’s not creepy.” The scarecrow wore a battered top hat and was dressed in a black leather jacket. A black hood was pulled over the scarecrow’s head, but two jagged slashes appeared where its eyes might’ve been. Emily peered up into the unseeing holes. They were dark. 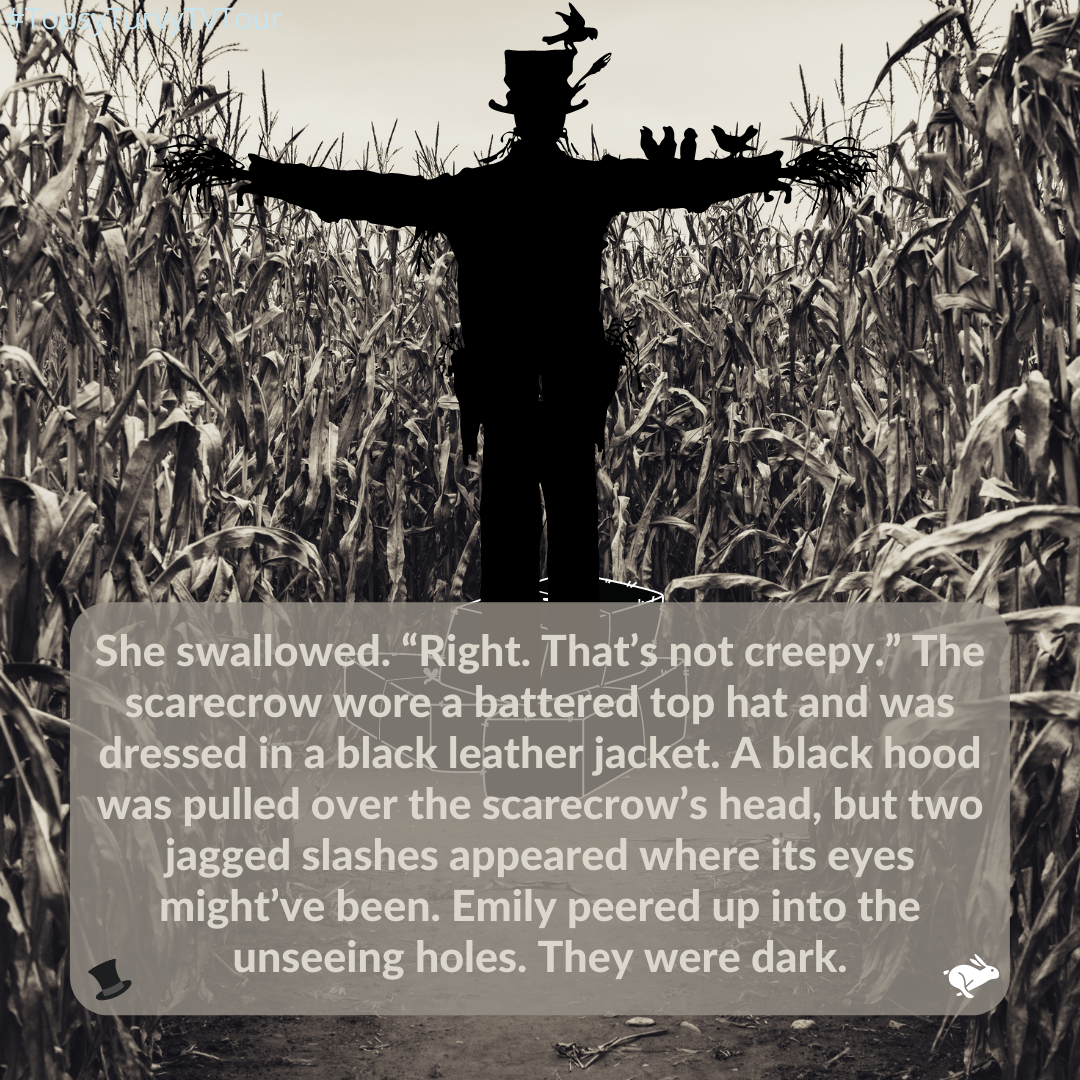 A hand wrapped around her mouth and yanked her backward into the corn stalks. Slamming her elbow into the attacker, she wrenched free and fled.

It – whatever it was – gave chase.

–
TL Brown knelt and jerked the scarecrow puppet across the floor – a twisted marionette on strings. A wicked smile lit up her face. “Show me what you can do, Sebastian.”
–

Emily raced ahead of the scarecrow, slipping on discarded shucks and cornsilk. She slid around a corner, escaping the monster’s grasping hand. Her arms pumped furiously as she ran.

WHOMP! A crash sounded from behind. Emily skidded to a stop, turning when she heard a man scream. Where was the scarecrow? She crept back the way she came. A low growl to her right startled her.

An orange cat sat on a flat leather jacket licking a paw. When it saw Emily, it rose, spinning prettily and shifting into a man. He put his finger to his lips. “Shh.” Then he pointed up. “She doesn’t know I’m here yet.”

… Today was the last day of the Topsy Turvy TV Tour! I hope you enjoyed it! Want to start from the beginning? Visit this link.