It’s day 4 of the #TopsyTurvyTVTour over on Instagram! Yesterday Tara Parker-Jones and Lucie Bellerose dropped a few wisecracks in an episode of Law & Order. Today, the Door to Door Magic Mystery Machine rolls up to the curb. Where is the gang heading? Here we go…

(This is a derivative work based on the TV cartoon Scooby Doo – episode To Switch a Witch.)

Emily studied her face in the mirror. “Bizarre.”

“Being two-dimensional?” Tara asked, adjusting her glasses and straightening the squares over each eye. Everyone knew Velma Dinkley was REALLY the sexy one. She eyeballed Emily –a/k/a Daphne Blake– and thought the role would suit her best friend. People underestimated Emily, too.

“Not just that. The colors are so bright.” Emily slipped on her headband. “But I’m ready. Let’s go!”

A note indicated today’s episode would be filmed outside the studio. They were due to meet their transportation in the back lot.

The cartoon ladies discussed the wisdom of not wearing pants while they waited. It wasn’t long before they heard the whirring of an electric van. An orange Door to Door Magic Mystery Machine coasted up to the curb.

Rabbit leaned out the window, grinning. “Looking good. Hop in!”

Emily and Tara climbed into the van. Six other Rabbits looked up from their texting, surrounding them with glittering dark eyes and twitching noses.

“What’s the plan?” Emily asked, leaning between the front seats and fiddling with Rabbit’s radio. There was no way she was listening to death metal for the entire trip.

“Heading up to Salem,” Rabbit told her. “There’s a witch wreaking havoc –has the town in an uproar.”

“Jinkies! It’s freakin’ Salem!” Tara called from the back.

“This witch is different,” Rabbit explained. “You might recognize her.” 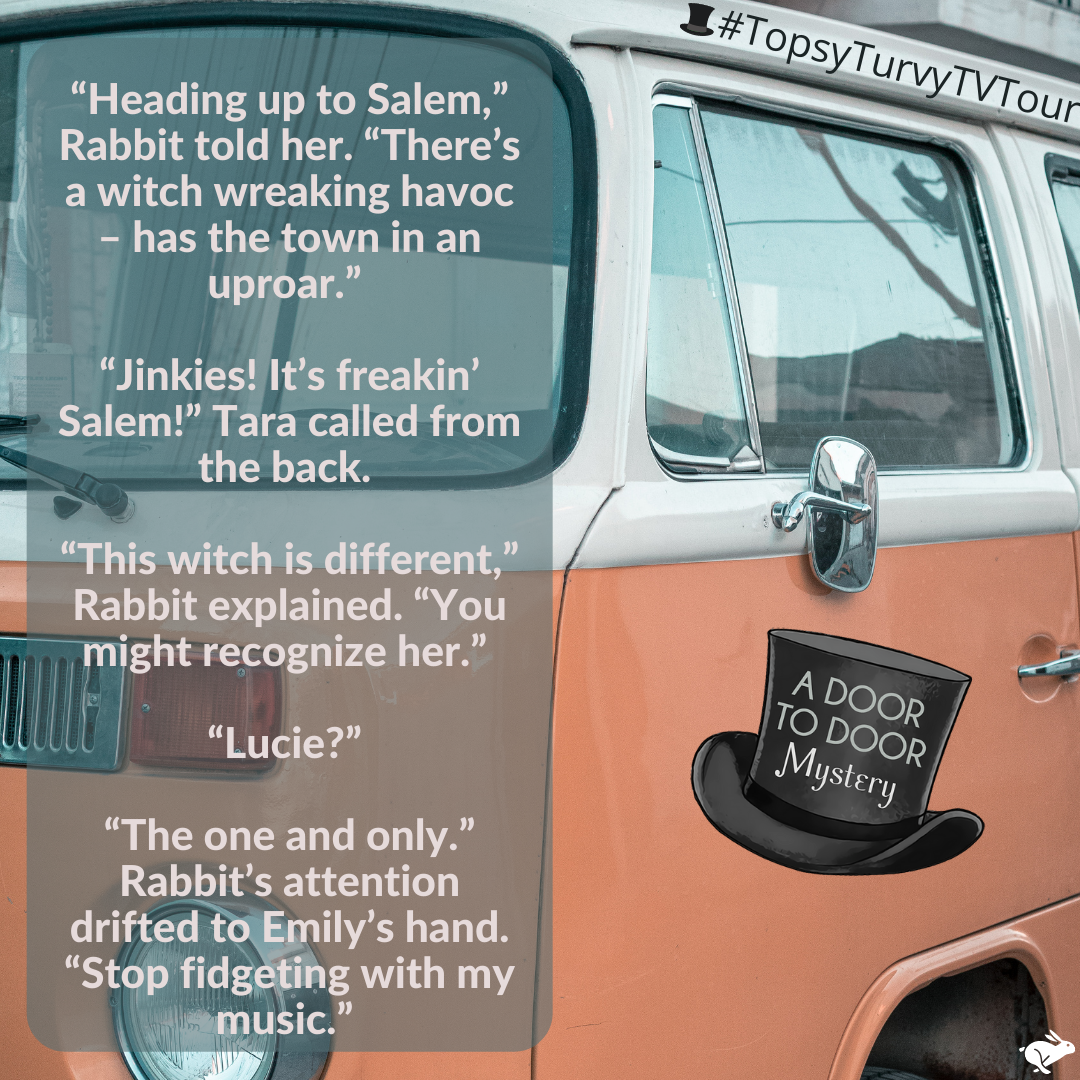 “The one and only.” Rabbit’s attention drifted to Emily’s hand. “Stop fidgeting with my music.”

Upon arrival, the gang learned that Lucie’s behavior was even strange for Salem. She was last seen walking a Great Dane through a museum.

“What has gotten into her?” Emily (er, Daphne) asked as she peered through the museum window.

“Anne’s magic mushroom brew,” came an annoyed voice from behind. Templeton’s long fingers fidgeted with the ascot tied around his neck. “This is unpleasant.”

“Not as unpleasant as THAT!” Tara-as-Velma pointed toward an advancing mob. “Run!”

… Tune in tomorrow as Door to Door Characters are stepping into an episode of Miss Fisher’s Murder Mysteries! (That post is now available! Click right here.)