It’s day 8 of the #RockTheTurvy writing challenge over on Instagram! Yesterday I shared a snippet from the first book in the upcoming Bellerose Witchline series. Today the power goes out. Who’s at the door?

To the tune of: After Midnight, by J.J. Cale.

Lucie bolted upright, gulping mouthfuls of air as she gasped her way awake. The dream’s images melted away quickly but left a bitter twinge in the center of her chest. Sighing, she rubbed her forehead.

Squinting into the darkness, she clicked the button on the base of the nightstand lamp. Nothing happened. Fumbling for her phone, Lucie touched the screen and it lit up. It was after midnight.

“Probably some drunk,” she grumbled, grudgingly leaving her bed. She felt around for her robe before gingerly tiptoeing her way to the door. Through the peephole she saw Rabbit holding his phone in his hand. The flashlight app on was on, casting a glow over his face. He lifted a wine bottle.

“What’s going on?” Lucie asked as she let him in.

“Power outage,” Rabbit said. “I’m wide awake and stuck sharing a room with Templeton. He’s complaining he can’t sleep with me moving around in there.”

“Interesting.” Lucie found the flashlight app on her own phone. She spotlighted the room’s ice bucket and cups with a beam of light. “I would’ve thought he’d be door traveling back home at night.” 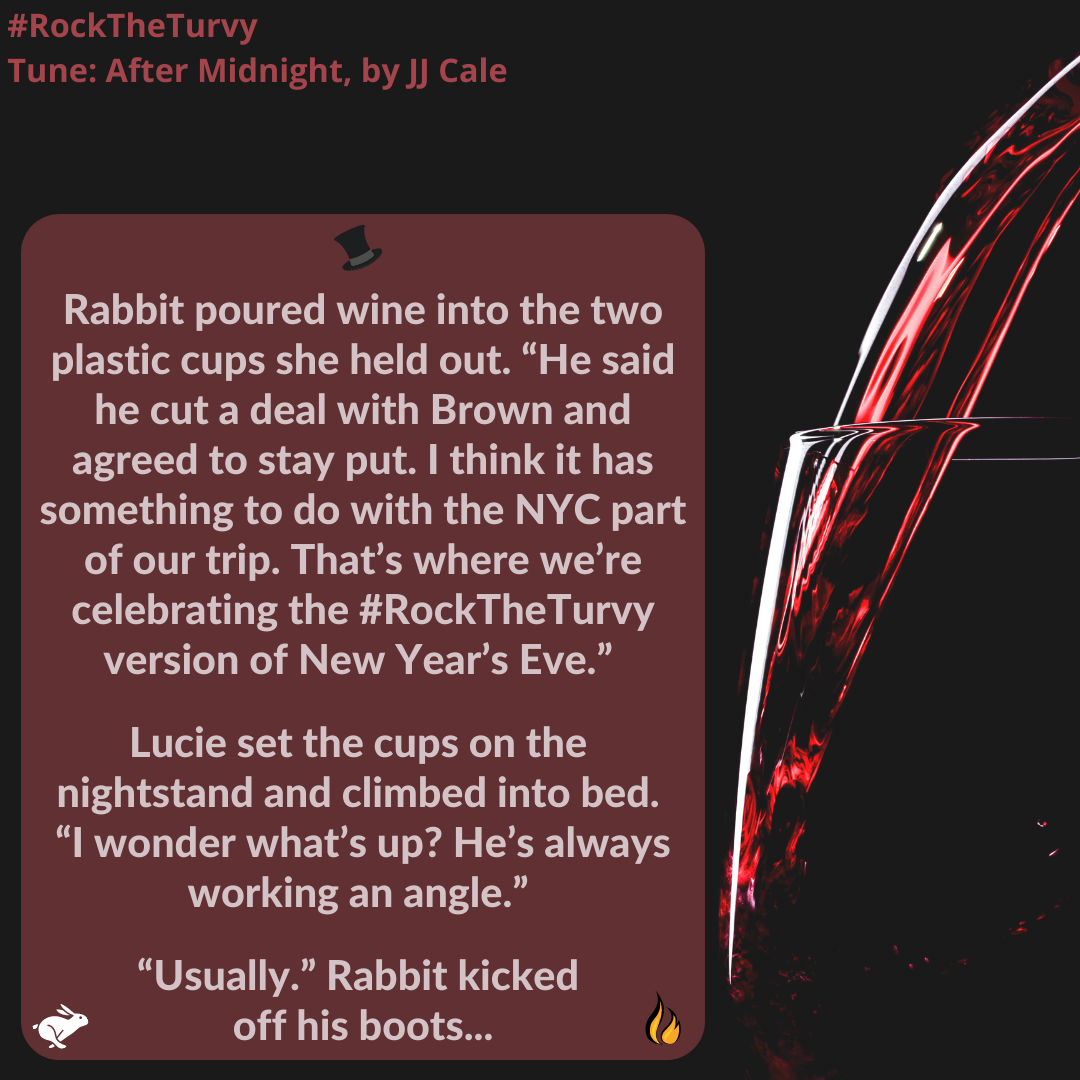 Rabbit poured wine into the two plastic cups she held out. “He said he cut a deal with Brown and agreed to stay put. I think it has something to do with the NYC part of our trip. That’s where we’re celebrating the #RockTheTurvy version of New Year’s Eve.”

Lucie set the cups on the nightstand and climbed into bed. “I wonder what’s up? He’s always working an angle.”

“Usually.” Rabbit kicked off his boots and rounded the end of the bed. The power suddenly flicked back on. Rabbit grinned, picking up the TV remote. He sat next to Lucie. “Movie?”

“Since we’re heading to Vegas, how about Hangover?” Lucie went for the remote.

“Works for me.” Lucie handed Rabbit a cup of wine and laid her head on his shoulder. “But if I fall asleep, wake me up every time Brad Pitt is on the screen.”

…Tune in tomorrow as the the crew heads to Las Vegas and meets a famous musician! (That post is now live. Find it here!)

🎶 Listen to After Midnight by J.J. Cale on YouTube here: https://youtu.be/2x0JK8vhmcc