I’m delighted to bring you two extra scenes from the #TurvyTruthOrDare Instagram writing challenge! Mystery author Saffron Amatti (writes the spooky and twisty Lucas Rathbone Mysteries) borrowed Templeton for Day 6 of the challenge. Then, Templeton took his revenge… read on!

You will need to read Part 1 – written by Saffron Amatti. You can read that short piece over on Facebook or Instagram.

*shoos you away to go read Saffron’s story*

…Back from the 1920s, Templeton stepped into Zenith, the restaurant where he was playing – strike that – forced into participating in T.L. Brown’s stupid Truth or Dare game. 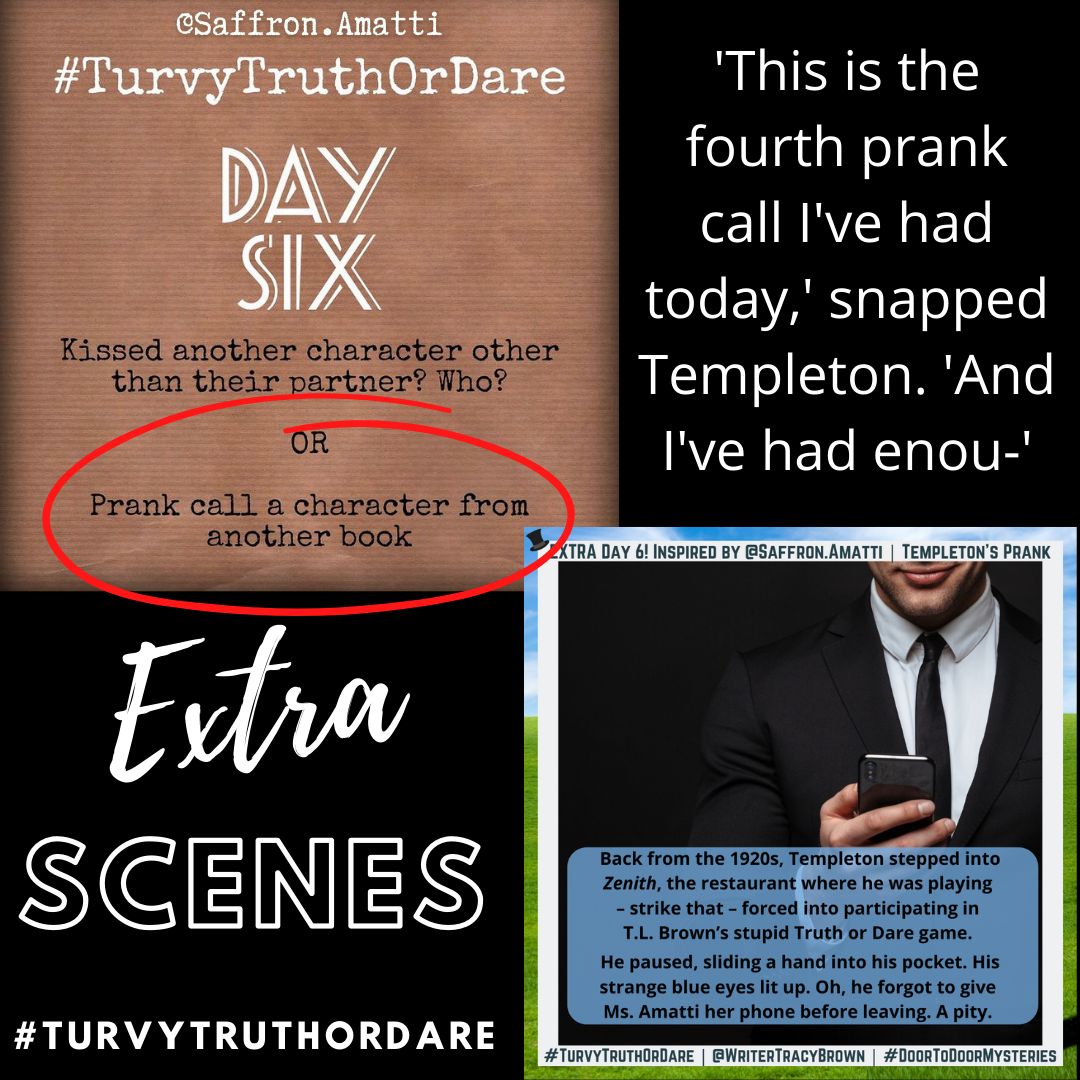 He paused, sliding a hand into his pocket. His strange blue eyes lit up. Oh, he forgot to give Ms. Amatti her phone before leaving. A pity.

He pursed his lips, eyeballing the password lock. Maybe Rabbit could hack into the phone for him.

Inside the party room, he ignored the others and sought out Rabbit. He thrust the phone into the other man’s chest. “Can you get past the lock?”

“Hi Templeton, nice to see you, too. I’m fine, thanks for asking,” Rabbit muttered as he dug into his own pocket, fishing out a network phone and a cable. He eyeballed the port in Amatti’s device then connected his to hers. He tapped a few commands into his phone. Seconds later, he was in. He handed Amatti’s phone back to Templeton.

“Thank you,” Templeton said absently as he turned away, scrolling through private texts and emails.

“Hey, where’d you go?” Lucie touched his arm. “What are you doing?”

Templeton flicked a dark look in her direction. “I think I’m done speaking to you for today.” He pulled away. “Ms. Parker-Jones? I’m in need of some assistance.”

Lucie dropped her gaze to the floor, silently counting to 10 as the fire under her skin grew. Across the room, Sebastian watched. He smiled evilly, biting the tip of his tongue between his front teeth.

Templeton grabbed the old Free Hugs sign and flipped it over. He picked up a marker and wrote out several lines. Tara read over his shoulder, her eyes widening.

“We’re going to play a little ‘prank’ on Ms. Amatti,” Templeton said. He brought up the voicemail greeting. “You are going to pretend to be Ms. Amatti and record this message into her phone.”

Tara cleared her throat. “That’s even a bit dirty for me to say out loud.”

“Do your best. Make sure you identify yourself as Saffron,” Templeton said, his pale eyes shining as he hit the ‘record’ button…