I’m giving five big stars to Lisa Alfano’s thriller, “Fractured Secrets.” Lisa is a fantastic supporter of the indie author community on Instagram; participates often in indie writing challenges; and counts many an indie-authored book on her bookshelf. She is a vital part of the IG writing community. And after reading Lisa’s “Fractured Secrets,” I am a HUGE fan. 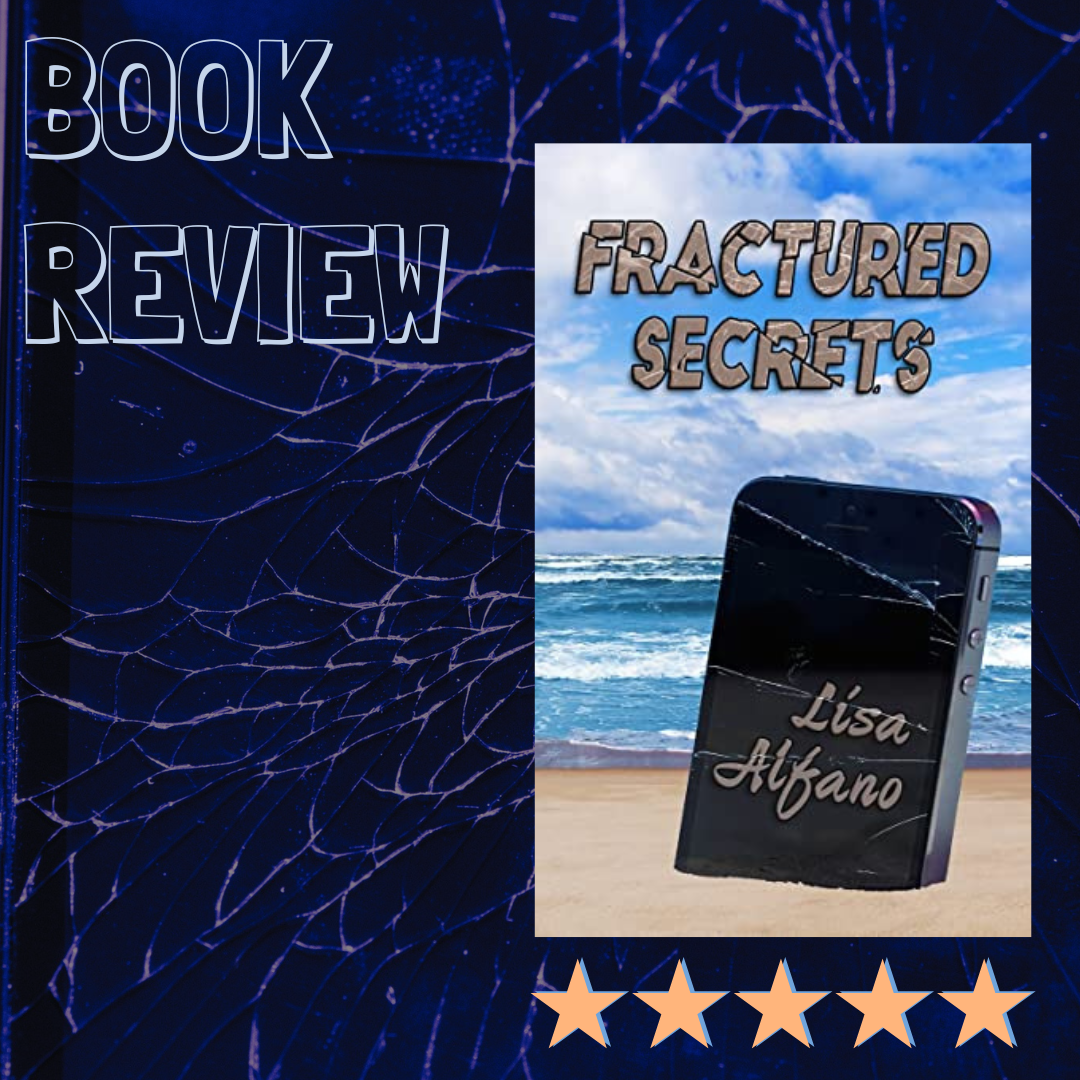 Author Lisa Alfano shared short stories featuring her characters in her social media channels, and I was intrigued by what I read. It was clear that more than one character played a pivotal role in her book “Fractured Secrets” – and that there were several dark and dangerous secrets being kept. My curiosity grew!

Sophie Mathieson is certainly the protagonist in “Fractured Secrets,” but her charismatic husband Jack, and their long-time friend Kyle, figure in prominent roles as well. (Kyle is also Jack’s restaurant partner at La Famiglia.) However, the author chose to introduce a fourth character and elevate him to the status of a second main character which brought a different point of view to the same central plot. Daniel Zane is known to Jack and Kyle as a restaurant patron, but the reader has the opportunity to get to know Dan through his thoughts; his own dysfunctional family interactions; and his shifts as a doctor at the local hospital where he seeks refuge from his own self-sabotaging mind chatter.

And that’s where the separate life stories connect: Sophie and Dan have very different problems, but they both have big secrets – ones that could destroy their lives and the lives of others if exposed.

Alfano skillfully delivers the mundane along with Sophie’s more serious issues: from a mean-spirited co-worker; to a marriage that’s not all that it seems; to the internal struggles Sophie navigates consisting of a sinking confidence, relentless guilt, and even a strained relationship with the divine. There are more than ‘fractured secrets’ in Alfano’s book – so many pieces and parts of Sophie’s life are cracking.

Then the messages from an unknown threat start coming in.

The author chooses to have Sophie fight back when she can, but Sophie is dealing with diabolical forces way beyond the normal troubles and challenges a woman at mid-life faces. Alfano explores several different ways a person can try to cope when everything is falling apart: emotionally shutting down; alcohol; nicotine addiction; and seeking shelter with the divine. But Sophie can’t reconnect to her faith. At one point she silently reflects: God did not answer the prayers of the unworthy.

Dan, the other main character in “Fractured Secrets,” also faces personal demons – surviving foster care as a child; dealing with an increasingly mentally ill family member; and self-imposed isolation. Some of Dan’s coping mechanisms are similar to Sophie’s in that he capitulates to avoid confrontation. He struggles to keep things under control by trying to mitigate the harm caused by irrational family members. But at some point, things just can’t be contained.

And then, Dan’s life becomes intertwined with Sophie’s as malevolent forces bring these two together.

I want to highlight the remarkable emotional exploration the author undertook following the unexpected death of one of Sophie’s loved ones. This person betrayed Sophie horribly – delivering a shocking surprise to the reader. While it would seem despair, anger, and even relief would be the obvious feelings running through Sophie after this person’s death, Alfano interjects a deep grieving for that ‘fractured’ relationship. Even though this person tried to harm Sophie, she doesn’t sink into full-on hatred. The author’s decision to delve into this complicated range of emotions produced a thought-provoking resolution to one of the more melancholy outcomes in this book.

Fans of storylines embracing a light element of divine intervention will enjoy the fleeting glimpses Alfano weaves into Sophie’s experience as she craves relief. It is satisfying even when all is NOT revealed. Sometimes it’s better to live in wonder of the metaphysical mysteries influencing one’s life.

Throughout this book, Alfano introduces secrets that build off one another and that add to the chaos brewing in the lives of Sophie and Dan. The author manages to pull off jaw-dropping twists while keeping each layer of newly-revealed secrets believable. By the last chapter, the reader can see how situations and character acts were connected for much longer than originally assumed. However, a few choice secrets are kept by the characters we’ve come to know so intimately – and yet, perhaps not everything needs to be said. We also see how characters controlled what they could and understand the reasons why.

A couple of loose ends were purposely left by Alfano and it worked. Why? Because life rarely wraps up so tidily. Yes, you can have a satisfying ending – even if things didn’t work out the way you thought they would. Yes, you can rebuild happiness. Yes, you can do the hard things and move to a better future with people you can trust. Lisa Alfano teaches this to the reader – a message threaded through a thriller full of secrets, lies, and ultimately, second chances.

If you enjoy meticulously plotted thrillers marrying multiple moving parts and viewpoints, along with a genuine exploration of the complexities between spouses; friends; enemies; strangers; and parents and their children, “Fractured Secrets” has all of this and so much more. There are frightening scenes as well as moments of hope. A big bravo to author Lisa Alfano for her exceptional blending of well-developed characters with a storyline that will captivate you long past your bedtime! 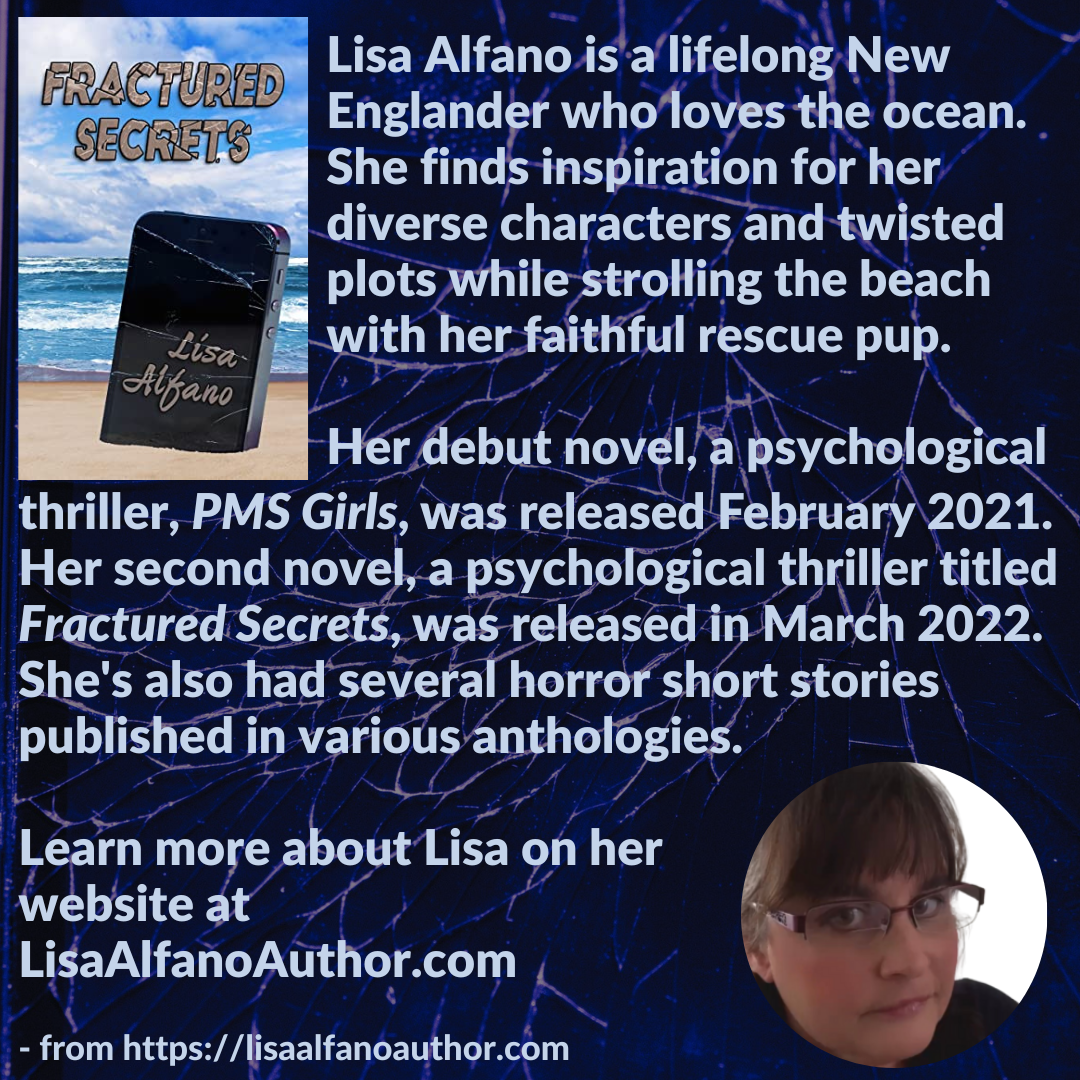