(And yes, I’ve already read book FOUR, too! Oh, Ms. Embleton… when do we get book number FIVE? *begs*) 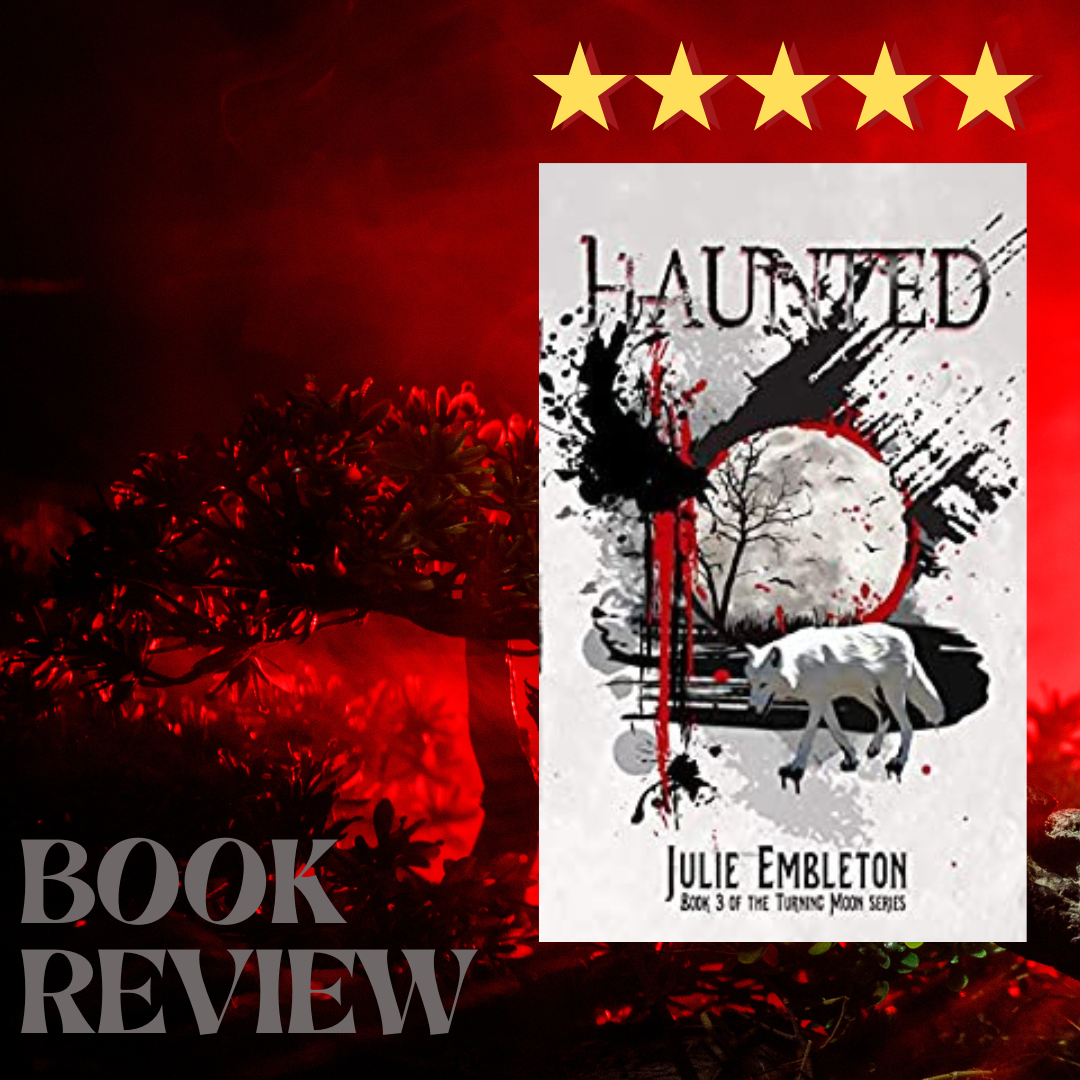 Can she keep the intrigue going? Yes, she can!

One of the best series I started reading this year was author Julie Embleton’s Turning Moon series. As soon as I finished one book, I jumped right into the next installment – and “Haunted” (Book 3) was everything I wanted plus more.

If you’re familiar with this series, you know that Embleton focuses on characters hailing from several wolf packs. However, she introduced an important side character in her second book (Released) – a vampire named Tori. She returns in “Haunted” as a complex and fascinating protagonist alongside Blake Creedon, a wolf belonging to the Cedar Copse pack.

When Tori reappeared in this latest installment, I wondered if the author could seamlessly pull two opposing worlds together (wolf and vampire) in a refreshing and intriguing way. She could and did. Tori, introduced to the others through a ‘lone wolf’ (Graham) – one eschewing the pack life – is tough and not to be trifled with, but she’s also quite caring. She takes her powers seriously – clearly understanding the risk she brings to others simply by associating with them.

There was a particular scene displaying this care that really stood out for me. Blake, the wolf with a growing attraction for Tori, encourages her to stay longer on pack land following a tense visit. Tori’s response: “Do not invite me in. This arrangement needs to be kept nice and simple. The last thing I want is to be the vampire who has access to your homes.”

And THAT is the thread continuing throughout this book. Tori knows who she is, and desires to keep clear boundaries so that none will suffer consequences – herself included. But, at what cost to her happiness?

Tori endeavors to do the right thing. She is sort of a big sister to Graham, willing to help him deal with his own personal demons, but also holds him accountable. At the end of the day, she is a vampire with a strong moral compass. This is what the reader comes to know. Author Embleton expertly takes us to that place without resorting to common cliches.

But “Haunted” is not just Tori’s book. Blake, loyal friend to his Alpha wolf and pack, is drawn to her. Unlike his friends, he never met his wolf’s ‘mate’ and finds himself seeking a relationship – at first a friendship – with this exciting woman. And of course, things are not going to be easy for this pair, and not only because they come from two different worlds. Graham, the ‘lone wolf’ mentioned previously, carries a terrible secret – one that endangers many – Blake and Tori included.

Tori puts herself in grave danger and faces multiple enemies: Graham’s and even a terrifying, violent one from her own past. Blake, pulled into the chaos as his pack – and burgeoning love interest – is threatened, fights for Tori: her safety, and ultimately, her heart.

An observation: Blake stood out to me in a way that Embleton’s previous male leads (wolves) did not. While strong and driven when facing danger, to me he seemed more laid back when compared to the leads in books one and two (Dean Carter and Michael Vincent respectively). For me, it was a great character / personality to flesh out. Blake could be interested without intensity, protective but not overbearing, and curious instead of cautious. This does not make him a better character than the others (indeed, Michael Vincent from “Released” remains my favorite), but it shows the wide range of characters the author is developing throughout her series. And THAT makes it even better.

This book has so many moving parts! The sub-plots are plentiful and still all fit together to drive the main story forward. It’s impossible to highlight them all, but I can guarantee you will find themes of: taking responsibility for one’s life regardless of past mistakes; forgiveness; altruism; courage; humility; and the reopening of a heart long gone cold. Additionally, secrets are exposed, the past returns in terrifying ways, but also curious ways. Separately, Graham and Tori must work through what this means for their futures. And Blake, he offers the chance for Tori to not face her future alone. This odd couple works.

But Julie Embleton, master of delivering a satisfying ending while she also makes you gasp with surprise, promises more drama in the next book of the Turning moon series (Torn). If you have not yet started this captivating series, stop what you’re doing and pick up a copy of book one, “Bound.” Once you enter the world of Embleton’s wolves, you won’t want to leave. 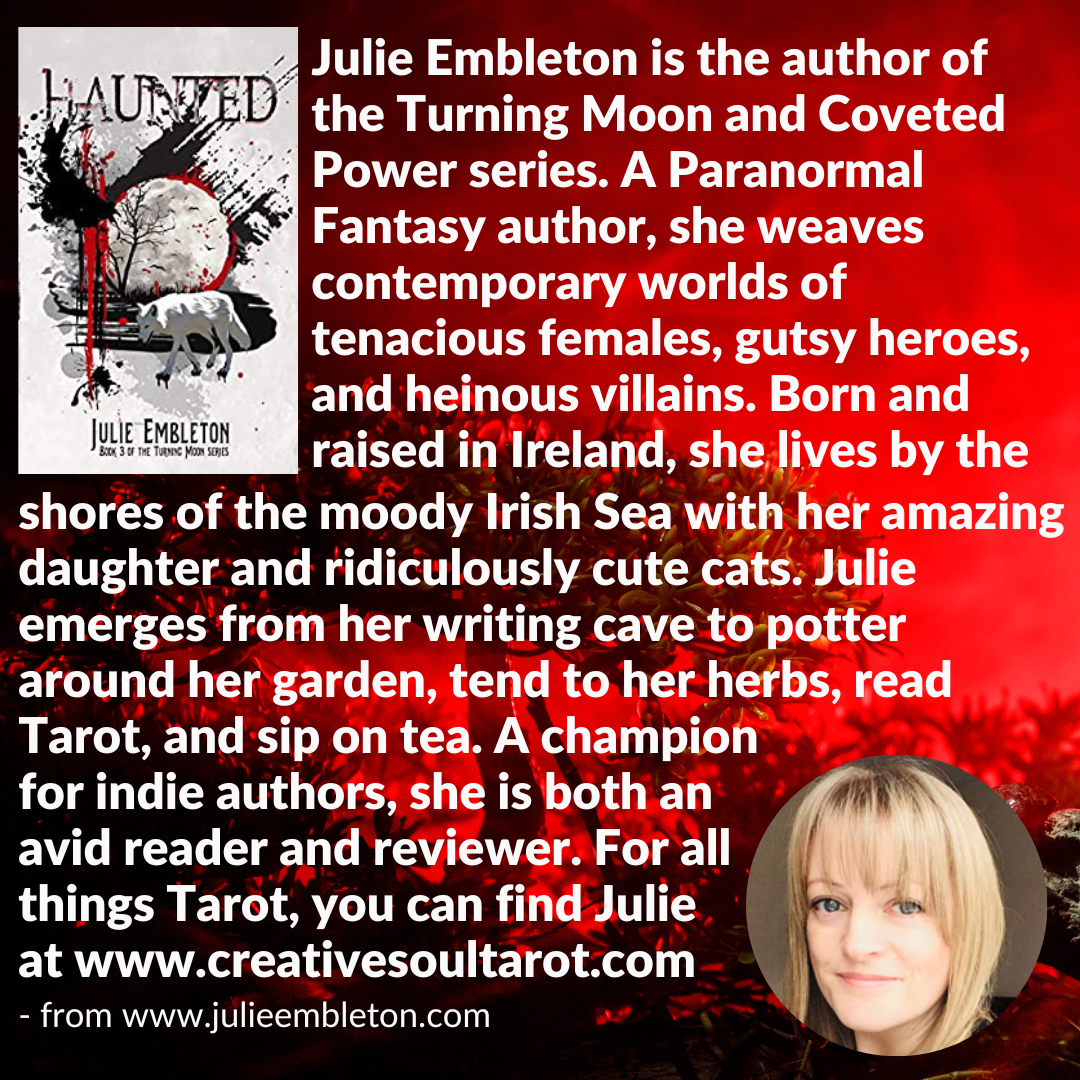