🐺 A big row of ⭐⭐⭐⭐⭐s to Julie Embleton’s “Released” – the SECOND book in her Turning Moon series! Yes, I’m tearing my way through this series. In fact, as I write this post, I’m already reading book FOUR. OMG… the Turning Moon series has cast a spell on me! 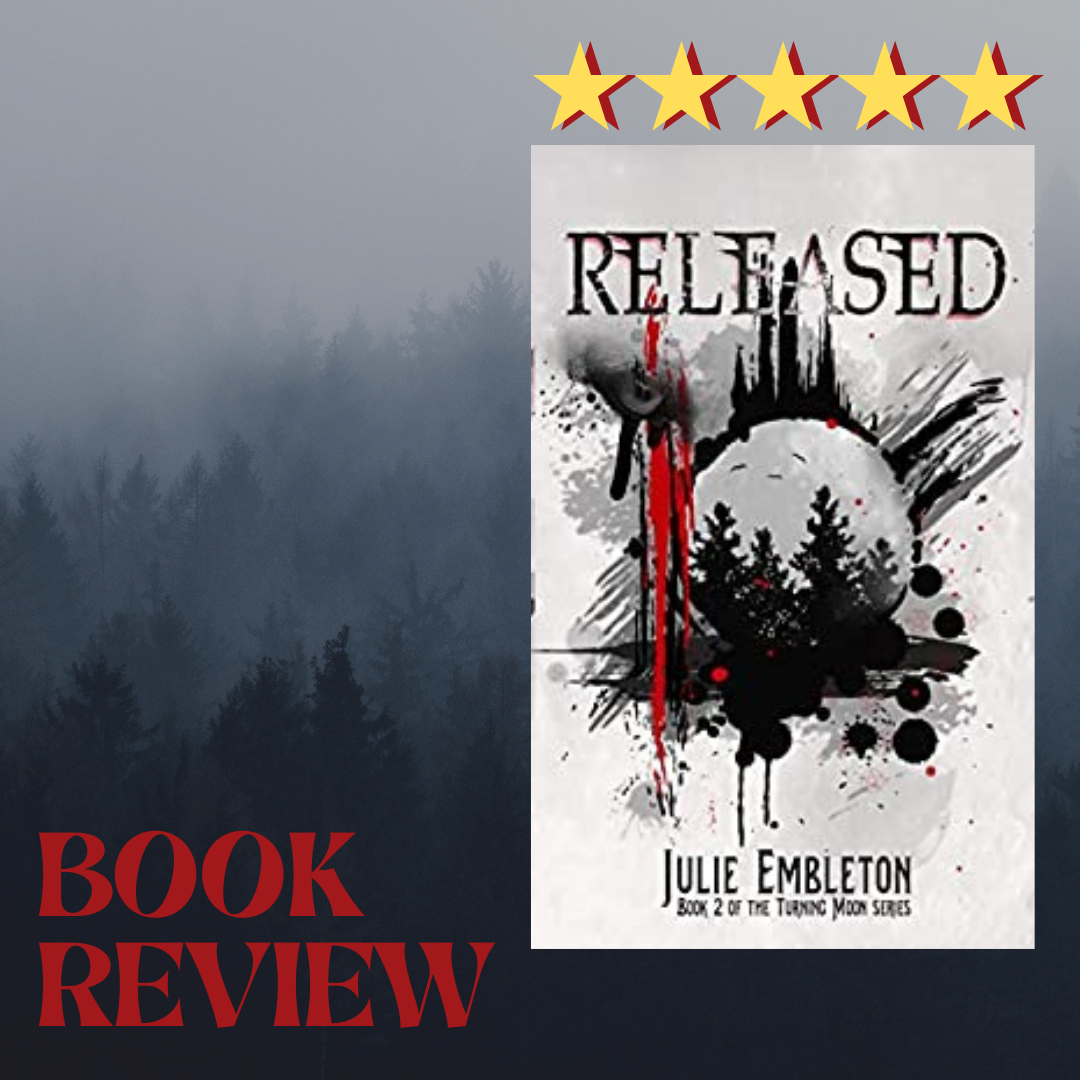 Oh, how I loved this book! Another Exciting Page-Turner from Julie Embleton!

The Turning Moon series by author Julie Embleton won my book-loving heart with the first installment, “Bound.” When I finished it, I dove right into the second book in the series, “Released.”

Oh, how I loved this book! Embleton takes us back into the Blackwater Ridge pack’s original story – back to paths begun from its ending and traveled by the wolves affected by the chaos, violence, and horror inflicted on them in book one. This time we follow protagonist (wolf) Michael Vincent as he tries to escape wretched memories and grieves alone for what he’s done (under duress). Quickly I became enamored of Michael – his honor, his passion and focus, and even his trend toward a sort of benevolent dominance. Early on a fan of this series will suspect he has all makings of an Alpha wolf inside him. But as a man (wolf) without a pack, how can he be?

Carving out a compelling plotline with a ‘secondary’ character introduced in a series debut is challenging. The author not only has to choose the ‘right’ character, she has to sell the new protagonist as THE star. Embleton makes this look easy – she’s a master of her craft. Not once did I compare the main characters in “Released” to those in book one or wished for a continuation of the original branch in the overall storyline. I was fully committed to Michael’s story by the middle of page three. I was already invested in wanting a good outcome for him before chapter one was over. You care for him, but you don’t pity him.

Yes, Embleton writes fantasy. Yes, this series contains the unbelievable – men and women shapeshifting into werewolves; vampires; demons; magic-wielding shamans – but she’s also created such believable characters that you find yourself thinking, this might just be true. Certainly, the feelings of despair, fear, hopelessness, friendship, thankfulness, and love are real, and as the characters experience the rough range of these emotions, we are drawn in and those same feelings erupt in our own chests.

I literally cried out “no!” at one point when Genna Clancy (I’ll get to her in a minute) makes a life-altering decision in one of the final chapters. As a reader, I was actually distraught over her choice and praying to the book gods that she would be stopped before it became too late. Genna’s distress leading up to this choice is so palpable, you genuinely *feel* her frantic run for help. Read the book to find out if she went through with her unsettling decision!

Which brings me to what I absolutely LOVE about Embleton’s skill as a writer: She can run a character – and your heart – through hell and yet you still have a glimmer of hope that she does not stamp out along the way. Too often an emotional tale will drag you so deeply through despair that you’re more exhausted than satisfied by the end of the book. Not so with “Released.” The author knows how to satisfy readers and yet keep them hungry for more. Thankfully there are more books in the series following this one.

But back to new character Genna – a HUMAN! Yes, a human gets drawn into the whole chaos surrounding Michael and the former members of the disbanded Blackwater Ridge pack. Genna is likeable and relatable. She and Michael get off to a rocky start, but by no means is this an enemy-to-lovers story. It’s more like life. First impressions aren’t always the best. Half fascinated by what she’s learned about Michael and half terrified by what this means for her moving forward, the reader can easily put their feet into Genna’s shoes and see the story from outside the world of the wolves. This is a fabulous way to ‘participate’ in the storyline, if you will. (Since we readers are likely not werewolves and would bring a human perspective!)

Author Embleton also scares the hell out of us with a familiar demon. Good grief, he is downright terrifying! I’ve seen the author interact in social media – she’s very nice. It’s amazing that she can produce such a horrid character. Yannek is the stuff of nightmares. I actually felt sorry for one of the ‘bad guys’ when Yannek got his hands on him.

There are some big twists in “Released” which will set up the third book in the series (“Haunted”) quite nicely. And that ending… Wow! You won’t want to stop – I jumped right into book three when I finished “Released.” I have loved every installment in the series so far… but a part of me is still drawn to wolf Michael Vincent and his story in book two.

In the author’s description of “Released,” she asks: Does a killer deserve redemption? This is something you will need to answer for yourself. For me, it was a yes. Michael more than atoned for what he’d done (again, was compelled to do), and in the process, picked up another reader / fan.

Lastly, I’d be remiss if I didn’t share how much I love witnessing Embleton’s love affair with words. Here’s an early one that I favorited: “Splashes of yellow now brightened the scene with the arrival of daffodils growing in large planters on the pavement edges, but he paid their jolly head-bobbing little attention as he pulled into his first stop.”

And admittedly this line brought on a snicker: “Because he has the personality of a plateful of mortal sin.”

Bravo to Julie Embleton’s “Released”! I’d give it more than five stars if I could. This book will sit on my shelf of favorites.

Where has this series been all my life? 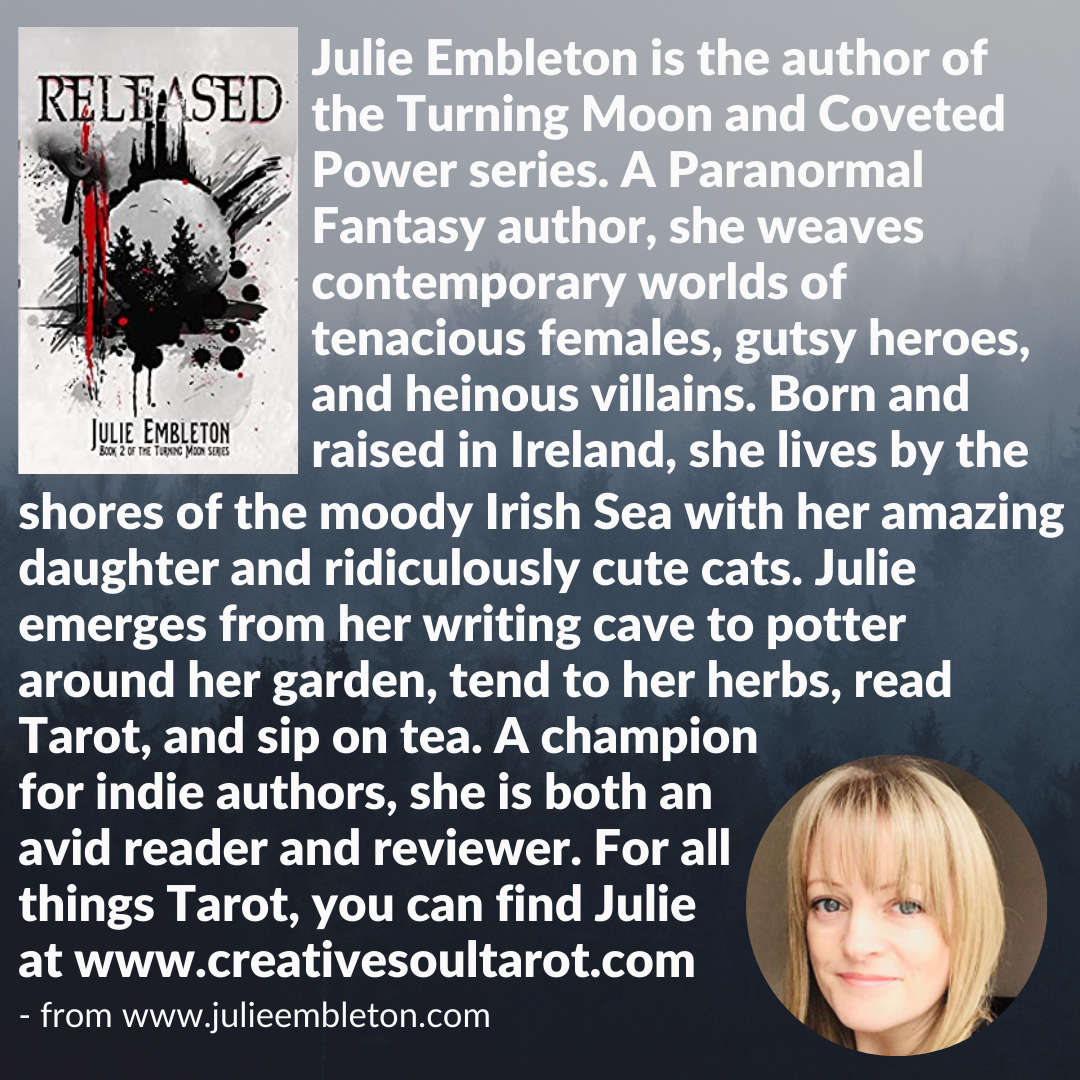