👻 A BIG ⭐⭐⭐⭐⭐s to author Saffron Amatti for the latest installment in her Lucas Rathbone Mysteries Series, Grave Secrets, available on Amazon on June 21st! 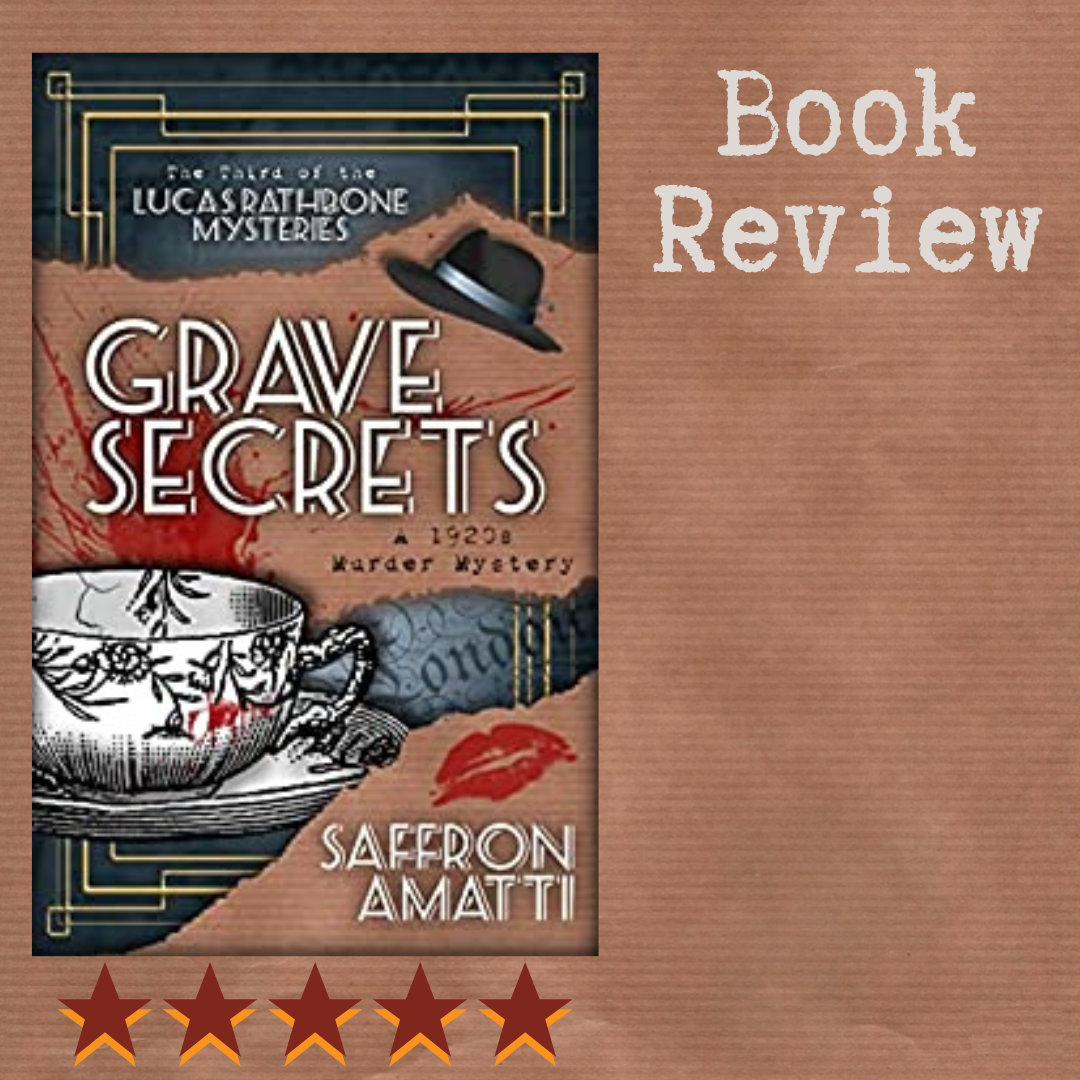 Amatti is the Mistress of the Unexpected, the Master of Making Us Want More

Author Saffron Amatti is back with Grave Secrets – reintroducing readers to the rich cast of characters she’s developed in previous installments of the Lucas Rathbone Mysteries. Her adventure-seeking lot will draw you into their latest escapade from page one. You will not be able to put this book down.

As a fan of the series, I was eager to slip back in time and into 1920s London (as well as quiet Castlebury Magna) to catch up with protagonist Lucas Rathbone and his adventure-loving girlfriend Clara Jenkins. Along with this sweet couple, a merry cast of supporters jump in to help the sometimes morally-gray, but always lovable, newspaper reporter Tommy Kilbourne as he scrambles to survive the latest mess he’s kicked up for himself.

Tommy, who I believe might’ve started out in the series as an interesting side character, has certainly earned a spotlight of his own. In Grave Secrets, the author moves readers easily from one character’s perspective to another, and we witness the struggle taking place in Tommy’s thoughts – hope, loss, longing, desire, overconfidence, fear, sadness, and gratitude. The series might be named after the main character, but with Grave Secrets, the author might consider adding an asterisk and a footnote highlighting that Tommy Kilbourne has more than one hand in the direction of this popular series.

As mentioned, author Amatti brings a carload of characters – plus a motorcycle and sidecar – together, and all these representatives from different parts of Tommy’s life are intent on either helping or using him. Lucas and Clara lead the charge – well, maybe Clara is the one leading, but Lucas is at his level best in this latest installment and has Tommy’s back in the most satisfying way – albeit sometimes at great comic relief / risk to himself. It was fantastic to “watch” all Amatti’s characters fit together like a jigsaw puzzle to create multiple separate scenes which eventually come together in an epic climax. Reading this book’s ending was akin to watching an exciting movie hit its wild conclusion inside my head.

And since this is a paranormal mystery with ghosts, you will find a diverse handful coming together – and specifically to psychic sleuth Lucas – to help and hinder as the plot picks up more moving parts. Just when you think you know what the author is up to, she spins your reading brain around and thrusts you in the opposite direction. Amatti is the Mistress of the Unexpected – readers applaud her mastery of plot twists. Also, a kudos to author Amatti for giving readers a bit of a peek into the ghost of Mrs. Bird. Oh, so intriguing – make sure you give us more in your next book! The interactions between Lucas and the gathered ghosts, and then Lucas and others, were perfectly executed.

In this reader’s opinion, author Amatti walked a wee bit closer to the line separating friendship and something more when examining the dynamics between Clara and Tommy. NOT a spoiler: the line was never crossed, but Amatti allowed a deeper glimpse into the more substantial emotions behind Tommy’s flirting – often used to taunt Lucas. Clara, I felt, also seemed to sink into the tenderness between them more readily this time around. To be clear, Clara is not a tease, and her heart belongs to Lucas, but a couple of scenes between Clara and Tommy were incredibly emotionally intimate – more than friends or even “surrogate siblings.” And yet, I did not interpret this as the author laying the groundwork for a future tryst. Perhaps Amatti intended to explore and display the evolution of the deepening relationship between these two. If so, it worked. Beautifully done.

And that ending… Whoa! I did not see that coming! I will be on pins and needles waiting to find out how Lucas Rathbone handles this monumental development the author left at his door. Amatti is not ready to make life easy for the main character who just wants a quiet life with his girlfriend Clara.

In sum, if you are a fan of the Lucas Rathbone Mystery Series, Grave Secrets will sweep you right back into the 1920s for the latest wild adventure. If you haven’t yet started the series, pick up The Problem With Dead People (Lucas Rathbone Mysteries, Book 1). Author Saffron Amatti excels in captivating the reader while energizing the tradition of exceptional British Mystery writing with a fresh perspective.

(Thank you to the author for my obligation-free review copy of her latest suspense-filled, fun, and oh-so-satisfying book in her celebrated paranormal mystery series!)