(Ms. Embleton, please bring us book 5 as soon as you can!) 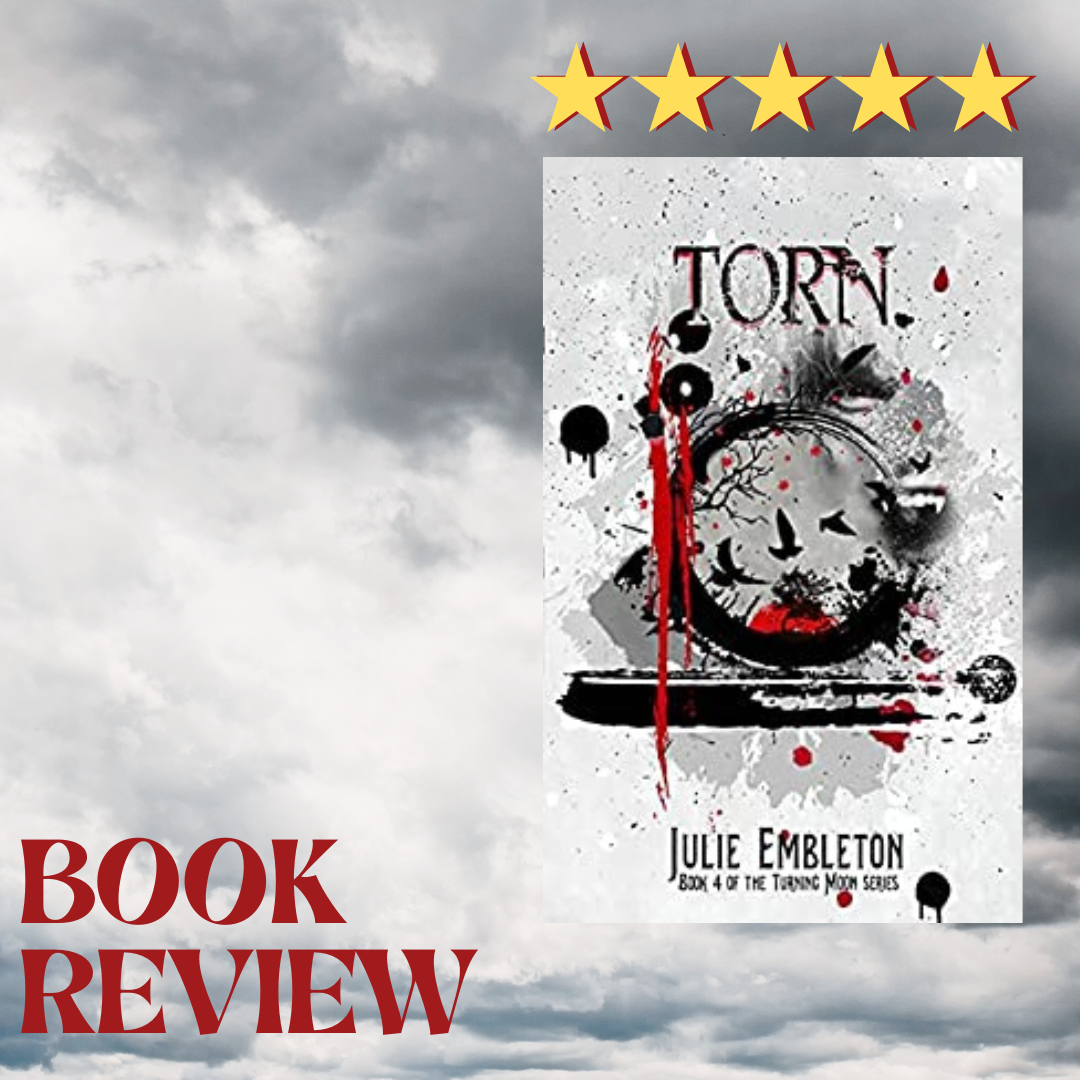 Just when you think this series couldn’t get any better, it does!

“Torn,” the fourth book in the Turning Moon series by Julie Embleton, continues the captivating tale of Tori, a vampire, and Blake Creedon, a wolf belonging to the Cedar Copse wolf pack. Their story really begins in book three of the series (Haunted), so this review of “Torn” will not dive too far into the weeds to avoid revealing the finer points found in “Haunted.”

The author is again at her best, creating characters we become more attached to as each page turns. Blake, already a favorite of mine, becomes even more endearing. I love his kindness. This time around, author Embleton has given him a difficult – actually, a horrible – decision to make, and even though I wanted Blake to choose in a particular way, I trusted the author. I decided that no matter the direction Embleton would go in the storyline, I was on board for it. And I was not disappointed. In fact, when the choice was made, it was a perfect fit for this installment. Again, I trusted the author to deliver the story in the way it *should* go.

A new, pivotal character was introduced in “Torn” – Emer – a wolf without a pack, a young woman struggling with her shapeshifting legacy. Bringing Emer into the world of the wolves introduced a significant dilemma – one that I didn’t want to be brought in because it upset the proverbial apple cart. But again, I trusted author Embleton. By the time Emer’s story deepens, and we see her world through her point of view, we are aching for her. We want her to feel love and acceptance. We are on her side. There are a couple of extremely poignant scenes with Emer when she is alone, afraid, and ashamed of who she is… I literally cried for her.

Julie Embleton creates characters you believe could exist next door – or at least in the next town over. It’s nearly impossible to not have an emotional response to her stories.

For me, “Torn” was full of surprises. For example, I did not expect to become a fan of vampire Alexander Durand, Tori’s maker and the man (vampire) she used to have a romantic relationship with decades prior. I had no idea I would be captivated and charmed by him. Maybe I was pulled into a spell – a vampire fascination? Any way you look at it, Alexander fast became one of my favorite characters in the Turning Moon series. Again, a surprise for me. He is a multi-layered character, and one you cannot second guess. Ruthless, intelligent, obsessive – yet able to show love and mercy. Once again, the paths followed by Embleton in this storyline work perfectly.

Tori’s unique – and difficult – relationship with Alexander is explored. There are memories shared about their past which further build on the complexity of these two characters. As a reader, I was easily caught up in the emotional turmoil each one experienced when the other is seemingly mortally wounded. (Even vampires can be destroyed, you know.)

From my perspective, this is Tori’s story all the way, but Embleton does not steal the spotlight from the wolves in her series. We are constantly reminded of the pack’s influence and strength – both as a whole and with individuals. Tori’s relationship – as a vampire – with Blake and the other wolves is so unique, so special. The friendship and love she finds with the Cedar Copse pack change the course of her life. And because of the bridge created by Tori’s and Blake’s relationship, perhaps a solid common ground between wolves and vampires will be available moving forward.

A reader returning to this series will find familiar faces such as lone wolf Graham, Tori’s longtime friend, as well as wolves from the Carter Plains pack, Nyah Morgan and her husband, Dean Carter. Of course, since Blake is from the Cedar Copse pack, Michael Vincent is present with non-wolf Genna Clancy. (Alpha wolf Michael still remains my favorite of all of Embleton’s characters, but admittedly, vampire Alexander is right up there, too.) There are new characters – such as the truly evil vampire, Haakin Eriksen.

A few more notes: I admire the balance author Embleton has struck with regard to sexiness. While not at all explicit, this series IS sexy. Embleton gives you just enough to let you fill in the blanks in your own head. There’s nothing wrong with more explicit details in a book, of course, but I think Embleton has found the right mix of what you see (when you read) and what you can imagine (if you want more) for her series.

Also, Embleton cracked the door open on future secrets – Alexander’s maker is referenced. Might he appear in later books?

I’ve noted this in previous reviews, and this has not changed: Embleton’s writing is smooth and exquisite. Never is there a speedbump in her words to rip you out of the story. Instead, you are mostly mesmerized by her words or a turn of phrase. Here’s an example: And it didn’t matter whether or not the ravaged organ beat. Hers was a lifeless lump of flesh, but heartache knifed it regardless, stabbed without relent.

And. That. Ending. I have already – along with other readers – pleaded with the author to release book five in the Turning Moon series. Oh, what a final chapter! The emotions: Elation! Shock! Horror!

AND… I will trust the author. Julie Embleton has proven to the reader over and over that she knows where this story is going – and it’s the right direction. We readers must simply follow her pen and prepare to be wow’ed again and again and again.

If you have not yet begun the Turning Moon series, pick up book one, “Bound.” It is an excellent beginning, with each new book in the series better than the last! 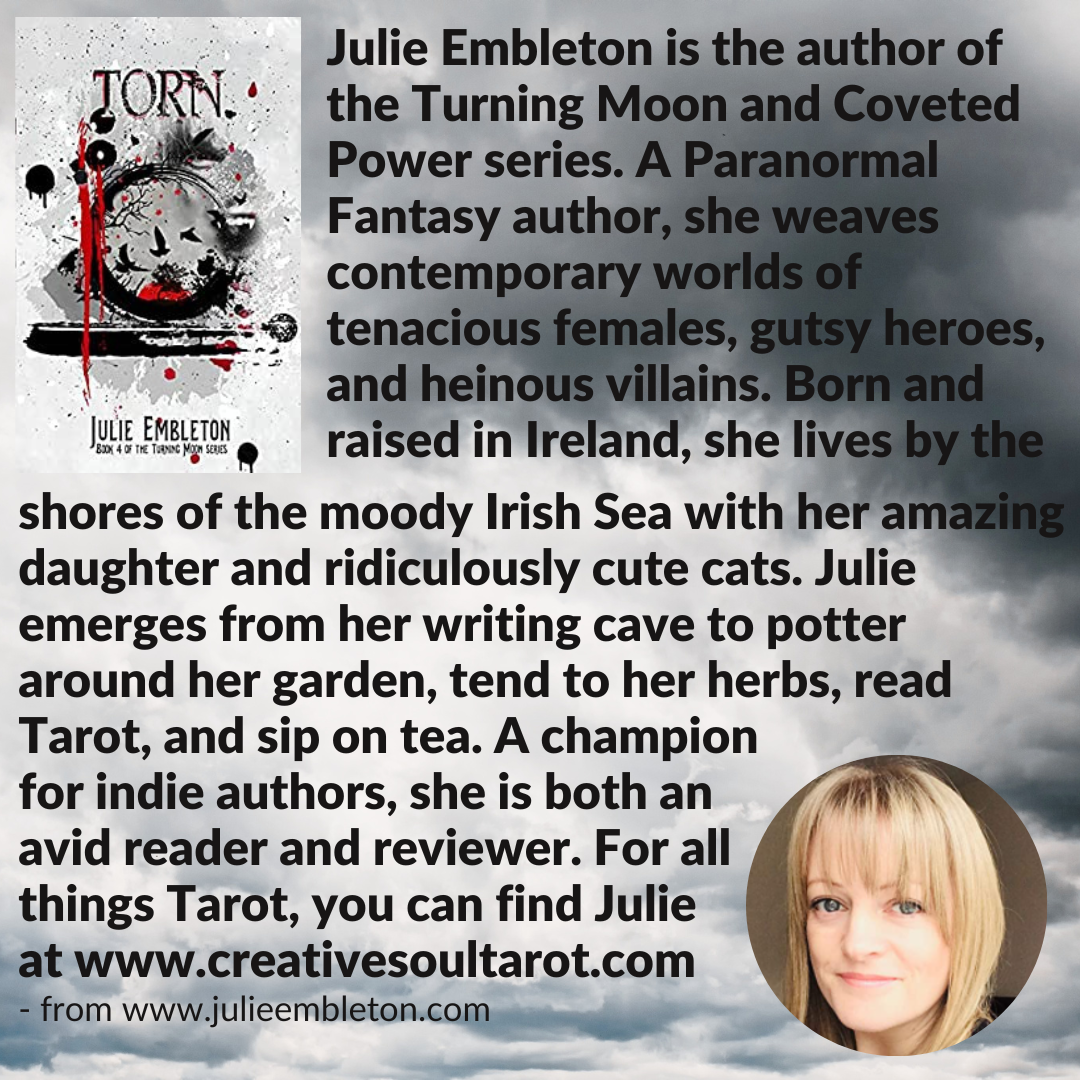 Day 7 #FairyTaleMe22: Your Song: What would you si

💃Woohoo! Thank you to reader Cindy Dykes for th