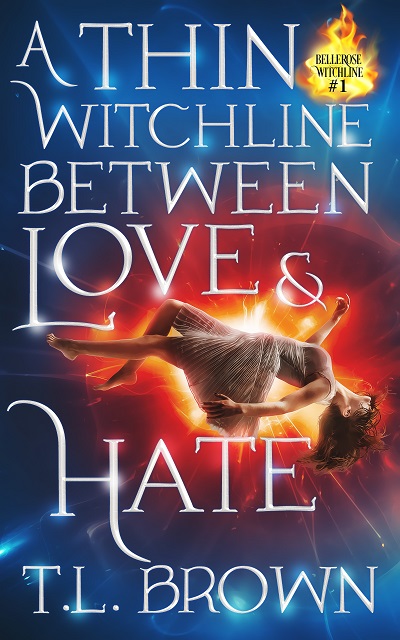 Lucie Bellerose first appeared in the second book of the Door to Door Paranormal Mystery Series by T.L. Brown. Lucie became a resource for that series’ main character (Emily Swift) as Emily explored her own “magical abilities.”

Lucie lives in a brownstone in the Empire’s capital city of Matar.

She recently moved back from an extended stay in France where she studied under a strict teacher, the witch Guillaume.

Join Lucie as she navigates maddening men, witch politics, controlling her growing power, a fiery temper, a desperate demon… and ‘monsters and ‘beasties’ when doors to other worlds begin to open.

About the Bellerose Witchline series: This is a stand-alone series AND also a bonus for fans of T.L. Brown’s Door to Door paranormal mystery trilogy. A Thin Witchline Between Love & Hate allows main character Lucie Bellerose to pick up the tale and tell readers “what came next” after the last page in Doors Wide Open.

Please note: The books in the Bellerose Witchline series are NOT cozy mysteries. They are Adult Dark Fantasy with elements of horror.

Readers of Brown’s Door to Door trilogy will recognize fan favorites John Templeton and Rabbit – learning more secrets about the two most important men in Lucie’s life as they reveal their darker sides. The Bellerose Witchline series also serves up a whole host of new lovable and terrifying characters.

Lucie cast a small hiccupping spell on Templeton when they first met in an effort to make him stop shouting.

😃It's Day 1 of the #AroundTheWorldInIndieAuthor

😃 How about a #BookTeaser from Doors Wide Open

💃 The PAPERBACK version of 🔥 #CrossingTheWit