Poppy Parsons is first introduced in Through the Door as Tuesday’s kitchen assistant, but we don’t yet know her name. In Doors Wide Open, Poppy tells Emily Swift her name when Emily stops at Tuesday’s apartment.

Book Trailers for the Door to Door Mystery Series include:

Through the Door – Book Trailer

Also known as: “The Book, capital T, capital B.”

The old book was heavy and thick. The bluish cover was worn with a faded, gold-embossed ‘S’ pressed into the center…

…Then I noticed the lock. It reminded me of those old drugstore diaries with a tiny lock and key designed to keep out snooping siblings and nosy mothers.

The book was a treasure trove of sketches, hand-drawn maps, and a lot of departure and arrival dates. Some pages consisted of nothing but strings of numbers… …handwritten notes about the places my father traveled to, the people he met – or planned to meet – and even some of the items he picked up on these trips. The word ‘Delivered’ was written by shipments ranging from tea to jewelry. Other pages contained lists with cryptic notes jotted in the margins such as: ‘Not available after The Split’ or ‘Available to Senior Salesmen only.’

“The book is five and a half inches by seven inches and three inches thick.”

“Worn blue cover, fabric, with a gold embossed ‘S’ … …No marks on spine. No other embossment or lettering on the outside of book. The book is sealed shut by a small brass lock. Lock is very old and tarnished, but seems to be sturdy… …Blank pages in beginning of book. No publisher or copyright information. As expected, the book appears to be a journal. The pages are aged, some yellowing – nothing appreciable. They are not brittle. Pages appear to be made from cotton fibers.”

Lucie Bellerose first appears in the second book of the series, Through the Door. She is a friend of Anne Lace and becomes a resource for Emily Swift as Emily explores her own “magical abilities.”

Lucie lives in a brownstone in Matar. She just recently moved back from an extended stay in France. Although Lucie doesn’t come out and say it in Through the Door, it’s intimated twice by others that she is a witch.

Lucie picks up the story (“what came next”) after Doors Wide Open ended. Learn more about A Thin Witchline Between Love & Hate here.

She has a couple of inches on Emily, and is in her late thirties. When first visiting her home in Matar, Emily notes about Lucie:

“She was fit, with auburn hair pulled into a messy knot at the nape of her neck. Her bangs were brushed to the side over bright, blue eyes. Small, silver hoops hung from her ears. She wore jeans and a plain heather grey tee shirt. On her feet, navy slip-on sneakers.”

Although she is fit, Lucie has some curves, as noted in this scene from Doors Wide Open:

“Don’t worry about it,” Lucie laughed as she thwapped him with a kitchen towel. “But yeah, Emily, I have a little more up top than you do.”

Lucie was curvy. She didn’t seem to exaggerate her figure, but her red tee shirt was pulled snugly across her chest, and she wore a pair of skinny jeans. Big Rabbit must’ve been checking her out while she bopped around the kitchen.

Lucie and Rabbit (this is NOT Big Rabbit) form a strong friendship during the summer after they first met. (Between Through the Door and Doors Wide Open.)

Lucie develops a rather tempestuous relationship with Templeton in Doors Wide Open.

Lucie cast a small hiccupping spell on Templeton when they first met in an effort to make him stop shouting. 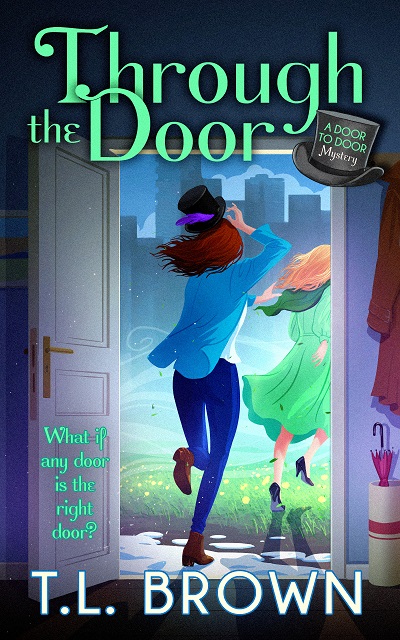 Through the Door is the second book in the Door to Door Paranormal Mystery Series, by T.L. Brown, published on May 31, 2021.

An early description of the book by the author promises tests of relationships, the darker side of friends, and an exploration of what some people will risk to get what they want.

Salesman Emily Swift is back – and so is Templeton!

After learning about her supernatural abilities and finding the Crimson Stone, thirty-year-old Emily Swift returns home to Kincaid to rebuild a normal life with her boyfriend. As she struggles to get a handle on her “door traveling” energy, a strange warning squawks from her car radio: a rogue, terrorist group called the Fringe is still watching her.

Before she can find out if the message is from a friend or foe, Emily’s quirky mother, Lydia, goes missing – and resurfaces in the Empire. As Lydia travels from city to city in this peculiar world, a wake of chaos is created. Add the murder of a hated art critic and a kidnapping into the mix, and things go from bad to worse. The Fringe believes Emily knows where the magical gemstone is hidden, and they’ll stop at nothing to get their hands on it.

Friends Tara and Rabbit join Emily as they race against the Fringe to catch up with Emily’s wandering mother. Will Emily’s nemesis, the mysterious John Templeton, join her in rescuing Lydia? What will it cost her? Is the price too high?